How I Created My Own Cloud Using BitTorrent Sync, Raspberry Pi & Owncloud 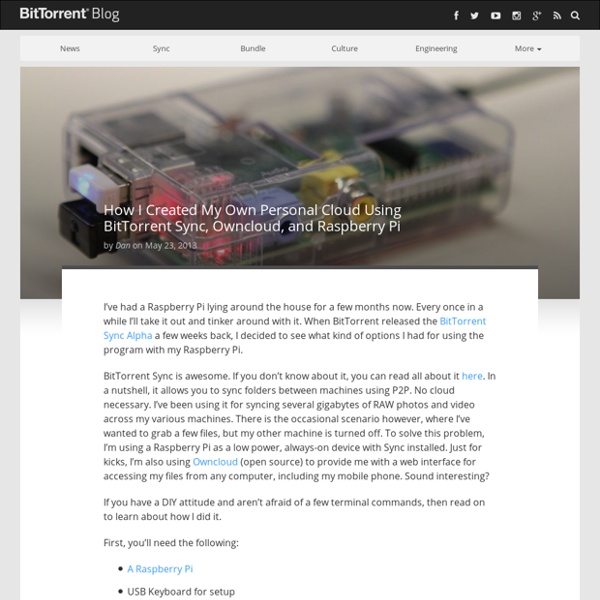 I’ve had a Raspberry Pi lying around the house for a few months now. Every once in a while I’ll take it out and tinker around with it. When BitTorrent released the BitTorrent Sync Alpha a few weeks back, I decided to see what kind of options I had for using the program with my Raspberry Pi. BitTorrent Sync is awesome. If you have a DIY attitude and aren’t afraid of a few terminal commands, then read on to learn about how I did it. First, you’ll need the following: A Raspberry PiUSB Keyboard for setupUSB Mouse for setupSD card (faster, the better)A thumb drive (I like using this for its low profile). Step 1: Setting up Raspbian Fire up your favorite torrent client and download the Raspbian “wheezy” image. I won’t go in to full detail on how to write the images to the SD card. When that is done, plug the SD card into your RasPi and fire it up. Step 2: Installing BitTorrent Sync wget " Then change the download directory: . df -h Related:  RPI- Backup

Remote Desktop with Raspberry Pi Do you want to remote into your Raspberry Pi and see a graphical desktop? It’s actually really easy. If you don’t want to dedicate a monitor or the TV to the pi but still want to use it, here’s your solution. Ok, another Raspberry Pi article. Anyway, so let’s say you’re like me and you have a bunch of computers around all the time. Pretty cool, right? Configure the Pi Make sure your Pi is connected to the Internet, and your local network containing the other machines you want to connect with. To set this up, you’ll need the Pi to run a service that your other computers can connect to. I chose xrdp for this, as I’ve had good experiences with it in the past. sudo apt-get install xrdp This will install everything you need on the Pi. Now get your IP address ifconfig eth0 | grep inet | cut -c21-30 Remember this IP as you’ll need to use it to find your Pi from another machine. Connect to the Pi with Windows To start simply go to Start -> All Programs -> Remote Desktop Connection And connect! Summary

Build Your Own Cloud Storage with Raspberry Pi and BitTorrent Sync Don’t believe the hype: the Cloud is far from secure. But have no fear – now you can forget Dropbox once and for all, and show the authorities a solid middle finger by rolling your own private, unlimited, and secure cloud storage platform with a Raspberry Pi and BitTorrent Sync. Part of this process overlaps with making a Pi-based Network Attached Storage, which you might also want to check out. If you’re really adventurous, you could even build a Raspberry Pi Twitter Bot that tweets out all the new files added to it. Do it. BitTorrent? Well, actually, no – though the most common usage of the BitTorrent protocol is distributing material that falls under copyright protection. In simple terms, BitTorrent Sync is similar to Dropbox in that it syncs files and folders between authorized computers, but doesn’t require a third party cloud provider since it uses the underlying peer-to-peer distribution technologies of BitTorrent. You Will Need Raspberry PiUSB storage driveComputer for testing

sqlsurvey xrdp 6 Replace Dropbox with BitTorrent Sync and a Raspberry Pi Notes Everywhere source I like to take long running notes, jotting down an idea here and there when one pops up. Previously I had been using the Chrome plugin QuickNote which is a light weight interface on top of the diigo cloud service. Enter BitTorrent Sync BitTorrent Sync is a free utility that uses the bittorrent protocol to keep folders in sync across devices. While Dropbox requires you to keep a copy of your data on their servers, btsync never requires your data to inhabit a device you do not own. First we will set up the Pi as the central server and then we will connect our devices to it. Installing BitTorrent Sync on the Raspberry Pi NOTE: I am using Raspbian Wheezy, but I suspect these ideas will translate to other operating systems. You need to grab the ARM build of BitTorrent Sync: mkdir ~/.btsync && cd ~/.btsync wget tar -xvf btsync_arm.tar.gz df -h # find your drive here, e.g. cd ~/.btsync sudo . Other Devices #!

Install WordPress 3.9 using Apache in Debian, Ubuntu and Linux Mint Writing an Apache or WordPress introduction will do no good due to the fact that both of them, combined together, are one of the most used Open Source platforms in Internet today, in fact Apache runs on 52 % world web servers and WordPress on one of every 6 websites – Apache with MYSQL and PHP providing the dynamic server gateway interface for WordPress Publishing Content Management. This topic explains the steps needed to be processed in order to install WordPress 3.9 on top of LAMP, which stands for Linux-Apache-MySQL-Php-Perl-Python-PhpMyAdmin on Debian, Ubuntu and Linux Mint, with basic Apache Virtual Host configurations and MySQL database access through CLI or PhpMyAdmin Web Interface, but be aware that does not cover other important network service configurations, like an IP name mapping provided by DNS server and simply uses the rudimentary system hosts file for IP name transactions (DNS query). Step 1: Server Basic Configurations 1. 2. 3. 4. $ sudo apt-get install phpmyadmin 5. 6.

CoRD: Remote Desktop for Mac OS X Raspberry Pi Bittorrent Sync - Bitsync Gegevens Categorie: Tutorials Bitsync. With Bitsync you can sync folders/files aross computers, tablets, phones. Kind of Dropbox. Pro's of Bitsync: All your data in own hands, no 3th party "cloud"The only size limitation is your own hard drive. Con's: If you have 2 devices. 1 PC and 1 smartphone. That's why we use the Raspberry pi. How to install Bitsync on the Raspberry Pi: sudo nano /etc/apt/sources.list.d/btsync.list past following lines: deb wheezy main contrib non-freedeb-src wheezy main contrib non-free Control + x to close/save the file. sudo apt-get update sudo apt-get install btsync Config: Default Sync instance? Port nr? Portmapping UPNP: Own choice, If you don't use UPNP you must manually open the port in your modem/router. Bandwidth: 0 = No limit. Upload Bandwidth: Web interface: Leave it. Web interface port: 8888 Specify a password for the interface: How to stop Btsync?

How to run your own e-mail server with your own domain, part 1 E-mail is old and complex. It's the oldest still-recognizable component of the Internet, with its modern incarnation having coalesced out of several different decades-old messaging technologies including ARPANET node-to-node messaging in the early 1970s. And though it remains a cornerstone of the Internet—the original killer app, really—it's also extraordinarily hard to do right. We most often interact with e-mail servers through friendly Web-based front-ends or applications, but a tremendous amount of work goes into hiding the complexity that allows the whole system to work. From a normal person's perspective, e-mail seems like a solved problem: sign up for Internet access and your ISP gives you an e-mail address. I'll tell you why: because if it's in the cloud, it's not yours. Because you must rely on others for your security. Well, to hell with that. This is hard and even a bit scary... E-mail is hard. You have been warned. ...but it’s also worth doing

Sync Clients ownCloud offers a variety of installation options. On this page all available options are listed. Choose the variant which best fits your needs. Looking for enterprise features? Release Channels ownCloud offers different release channels, where the software is provided. Looking for older versions? The server is the core software behind ownCloud. Documentation Installation GuideUpgrade manualRelease notesAppliance setup guideChangelogownCloud public PGP key Resources Tarball The installation via the ownCloud tarball is the most common option and is best for production environments. Docker If you already are "dockerized", checkout the ownCloud Server Docker Image maintained by ownCloud. Appliance The appliance is the easiest way to get ownCloud up and running and is best for non-technical users. Linux Distribution Packages ownCloud provides ready-to-deploy packages for popular Linux distributions such as Debian, Ubuntu, Fedora, RedHat Enterprise Linux, CentOS and openSUSE. Go to packages iOS Android

Owncloud vs. Dropbox What do you get for your money? That’s the question everyone looking to buy a piece of tech asks themselves. It also happens to be the question this recurring feature will try to answer. Is it worth spending extra on high-end gear, or do you get what you need with cheaper models? Every month, we’ll look at some of the cheapest and most expensive products in a given category, testing each to see what their limits are and to help you figure out when you can cheap it out, and when to plunk down some extra cash to get what you need. Hi/Low: Cloud Storage “I wandered lonely as a cloud,” William Wordsworth once wrote, perhaps while pondering the dearth of cloud storage options available in 1802. Modern hunters of cloud-related bliss have an overwhelming number of solutions, ranging from basic and cheap to feature-rich and expensive. Space Both ownClould and Dropbox offer ample space for you to store your stuff. Services Clients Privacy & Security Conclusions: Which Is Best?

VirtualHost Examples This document attempts to answer the commonly-asked questions about setting up virtual hosts. These scenarios are those involving multiple web sites running on a single server, via name-based or IP-based virtual hosts. Running several name-based web sites on a single IP address. Your server has multiple hostnames that resolve to a single address, and you want to respond differently for www.example.com and www.example.org. Note Creating virtual host configurations on your Apache server does not magically cause DNS entries to be created for those host names. # Ensure that Apache listens on port 80Listen 80<VirtualHost *:80> DocumentRoot "/www/example1" ServerName www.example.com # Other directives here</VirtualHost><VirtualHost *:80> DocumentRoot "/www/example2" ServerName www.example.org # Other directives here</VirtualHost> The asterisks match all addresses, so the main server serves no requests. You may replace * with a specific IP address on the system. The server has two IP addresses.