EaseUS Todo Backup Free Review – Speedy and Multi-Talented Data Backup App. Data backup and restore applications remain indispensable for any serious PC users who want to secure their important files or even the entire operating system with the current settings in case of unexpected data loss, malware infections, or simply a hard drive scarred with numerous software installations and uninstallations that eventually lead to Windows' refusal to function properly. 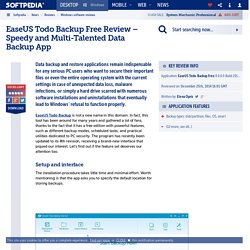 EaseUS Todo Backup is not a new name in this domain. In fact, this tool has been around for many years and gathered a lot of fans, thanks to the fact that it has a free edition with powerful features, such as different backup modes, scheduled tasks, and practical utilities dedicated to PC security. The program has recently been updated to its 8th revision, receiving a brand-new interface that piqued our interest. Let's find out if the feature set deserves our attention too. Setup and interface The installation procedure takes little time and minimal effort. Various backup modes Scheduled backups The Good. Best Free File-Based Backup Program. Read this article in Spanish (Español) Introduction The theme of this category is to provide reviews for the most popular and best free file-based backup programs that provide adequate features, ease of use and ability to set and forget. 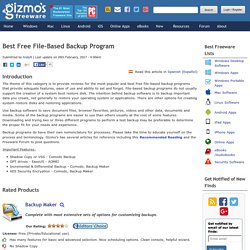 File-based backup programs do not usually support the creation of a system boot restore disk. The intention behind backup software is to backup important data you create, not generally to restore your operating system or applications. There are other options for creating system restore disks and restoring applications. Use backup software to save document files, browser favorites, pictures, videos and other data, documents and media. 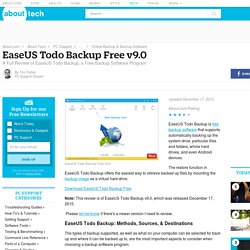 Please let me know if there's a newer version I need to review. Backup-Software für Windows. Back Up Central. Set Up an Automated, Bulletproof File Back Up Solution. CarotDAV integrates Dropbox, Google Drive, SkyDrive, SugarSync, Box, FTP, and WebDAV into one program. What is it and what does it do Main Functionality CarotDAV is a simple application that can connect to various cloud storage services, in order to download and upload files. 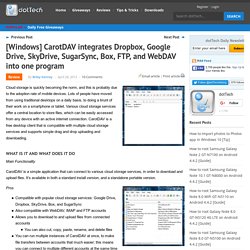 It’s available in both a standard install version, and a standalone portable version. Pros. CryptSync - Stefan's Tools. CryptSync CryptSync is a small utility that synchronizes two folders while encrypting the contents in one folder. 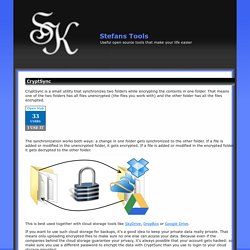 That means one of the two folders has all files unencrypted (the files you work with) and the other folder has all the files encrypted. The synchronization works both ways: a change in one folder gets synchronized to the other folder. If a file is added or modified in the unencrypted folder, it gets encrypted. If a file is added or modified in the encrypted folder, it gets decrypted to the other folder. This is best used together with cloud storage tools like SkyDrive, DropBox or Google Drive. If you want to use such cloud storage for backups, it's a good idea to keep your private data really private. If you want to backup and encrypt your files to more than one cloud storage (just to be safe), you can do that as well: just set up two sync pairs with the original folder being the same for both pairs. CryptSync works by synchronizing folder pairs. Long paths Run in background Exit. MultCloud - Put multiple cloud drives into one.