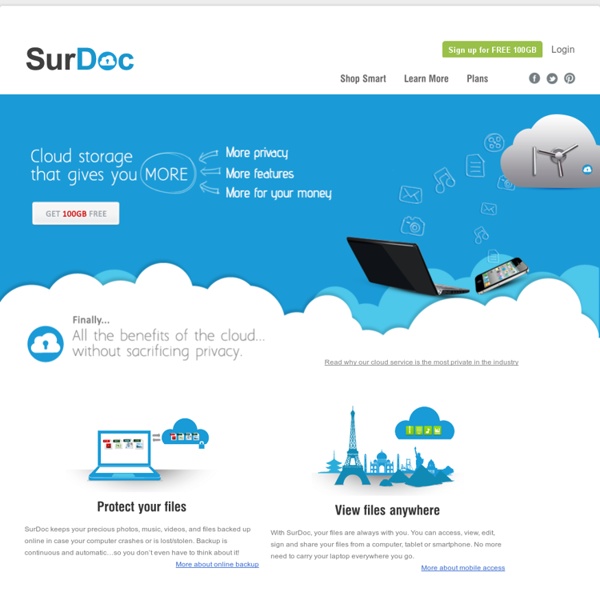 SurDoc keeps your precious photos, music, videos, and files backed up online in case your computer crashes or is lost/stolen. Backup is continuous and automatic…so you don’t even have to think about it! With SurDoc, your files are always with you. You can access, view, edit, sign and share your files from a computer, tablet or smartphone. No more need to carry your laptop everywhere you go. Send files with ease.

One Stop Resource for Google Docs If you’re a Google Docs user, curious about Google Docs, work with Google Docs with students, and especially if you’re looking for help understanding all of the features of Google Docs, then you’ve got to bookmark MaryFran’s Google Docs Tutorials. Created as a Google Site (of course), this is a huge collection of resources, tutorials, videos, … all devoted to helping the visitor understand the ins and outs of working with Google Docs. That’s really the best description I can think of to describe this site. Laptop Overheating fix Problem with Best Effective Tips When Laptop computer were Introduced, they were very exclusive, expensive, heavy, and UN-powered. With the advancement in technology, modern laptops have been introduced with excellent features like lightweight, portability, and ability to perform as most powerful desktop do today. Despite of having all these features, and the facility of portability, there are Laptop Overheating Fix issues that users are facing while using their devices. Power source is the most and very common hardware fault found in laptops. You might be familiar with the case when your lap doesn’t turn on even after many attempts.

How I moved my websites to Dropbox and GitHub A few months ago I cancelled my hosting and server accounts and moved all my websites to the cloud. I tried it as an experiment; never for a second I thought it would work this well. I did the switch out of impulse: I was pissed. 10+ Best Apps For Your Dropbox If you’ve been using Dropbox for a while, you may not have noticed that a whole ecosystem of applications have been built up to use the service. Over time, these apps have sprung up to fill all of the little holes Dropbox left unfilled. There are apps now for just about everything. It’s possible to sync Google Docs to Dropbox, automatically send Gmail attachments to Dropbox, play music in a browser from your Dropbox music files, encrypt your Dropbox, easily host a website or blog in Dropbox, collect URLs and web clippings to Dropbox and to automate file syncs between all of your social networks and Dropbox. You can even view all of your Dropbox files alongside your Google Docs, Box files and FTP files in the one web interface.

Infinite Storage on your Desktop features infinite hard drive Keep every file you have ever owned in Bitcasa. Ditch the external hard drives, and store your files in your Bitcasa Infinite Drive to free up space on your computer and phone. The Best Apps for your Dropbox Meet some of the best Dropbox apps that add new functionality and extend the service beyond the realms of online storage. Dropbox has made our digital lives so much easier. You put a file in your Dropbox folder and it becomes available on mobile phone, your tablet and on all your other computers. Top 10 Uses For Dropbox You May Not Have Thought Of For many advanced computer users, Dropbox is the premiere cloud-based storage and sharing document service. It has replaced the Documents folder on my Mac, and is the primary way I sync files between my devices. Similar and equally useful free services include Google Drive and Box.com. We’ve already covered some awesome uses for Dropbox, including How to Run Multiple Dropbox Accounts Simultaneously [Mac], how to send send files to your Dropbox without using Dropbox, how to upload files faster and easier with Dropbox, and even how to host a WordPress blog on your Dropbox account. The following are a handful of other ideas for new and maybe more experienced users of Dropbox. Get Your Group Dropboxed

About Smash — Smash Like many ideas, Smash is the result of a frustration: the services used to send files securely are too complicated and too expensive. This often leads employees in enterprises to resort to tools that are certainly simpler to handle, but they are not always secure and they rarely enhance the enterprise’s image. As for independent professionals who don’t have access to services reserved for enterprises, they are sometimes obliged to resort to less efficient services corrupted by advertising. In this game, nobody wins.