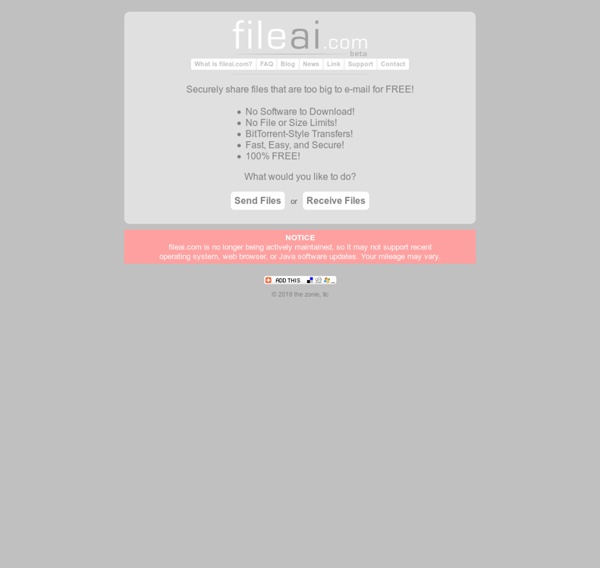 Web World Wide » 50 Free Internet Tools for Tin-Foil Hat Wearers If your wardrobe includes a shiny tin-foil hat, then you will love these free Ma Internet tools. Whether you want to protect yourself from Internet snoopers, want to spy on those out to get you, or want to be able to track trends that you know will lead to something big, then these tools will help you get the job done. Without a Trace Online Storage, Online Backup, Cloud Storage Securely Store & Manage Your Files in the ADrive Cloud. Centralize Your Files. Securely store, manage and share all of your music, videos, photos, documents & more! Compare SkyDrive, Google Drive and Dropbox We compare the features of Windows SkyDrive, Google Drive and Dropbox to help you pick the best file storage and sync service for your specific requirements. You have your files, photos and documents on your home computer that you would like to access from other locations on different devices. Dropbox has been the de-facto choice for long but that could potentially change as Microsoft and Google have just entered the arena with the launch of Windows Live SkyDrive and Google Drive respectively. The three services are very similar – you get online storage (you can access your files anywhere) and file synchronization – edit a document on one computer and the changes are propagated to all your other computers almost instantly.

Main Aircrack-ng is an 802.11 WEP and WPA-PSK keys cracking program that can recover keys once enough data packets have been captured. It implements the standard FMS attack along with some optimizations like KoreK attacks, as well as the all-new PTW attack, thus making the attack much faster compared to other WEP cracking tools. In fact, Aircrack-ng is a set of tools for auditing wireless networks. If you are impatient and want to know how to get started, jump to the Getting Started Tutorial. Aircrack-ng is the next generation of aircrack with lots of new features: More cards/drivers supported More OS and platforms supported WEP dictionary attack Fragmentation attack WPA Migration mode Improved cracking speed Capture with multiple cards Optimizations, other improvements and bug fixing …

Cloud Explorer for SkyDrive Microsoft Office Mobile is the official Office companion optimized for your Android phone. You can access, view and edit your Microsoft Word, Microsoft Excel and Microsoft PowerPoint documents from virtually anywhere. Documents look like the originals, thanks to support for charts, animations, SmartArt graphics and shapes. When you make quick edits or add comments to a document, the formatting and content remain intact

The Best Apps for your Dropbox Meet some of the best Dropbox apps that add new functionality and extend the service beyond the realms of online storage. Dropbox has made our digital lives so much easier. You put a file in your Dropbox folder and it becomes available on mobile phone, your tablet and on all your other computers. Infinite Storage on your Desktop features infinite hard drive Keep every file you have ever owned in Bitcasa. Ditch the external hard drives, and store your files in your Bitcasa Infinite Drive to free up space on your computer and phone.

10+ Best Apps For Your Dropbox If you’ve been using Dropbox for a while, you may not have noticed that a whole ecosystem of applications have been built up to use the service. Over time, these apps have sprung up to fill all of the little holes Dropbox left unfilled. There are apps now for just about everything. It’s possible to sync Google Docs to Dropbox, automatically send Gmail attachments to Dropbox, play music in a browser from your Dropbox music files, encrypt your Dropbox, easily host a website or blog in Dropbox, collect URLs and web clippings to Dropbox and to automate file syncs between all of your social networks and Dropbox. You can even view all of your Dropbox files alongside your Google Docs, Box files and FTP files in the one web interface.