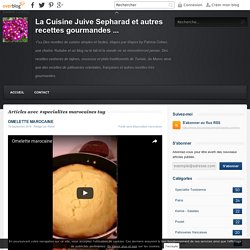 Salade d'aubergines à la tomate. Salade de betteraves au cumin. Chakchouka. Israeli Hummus Recipe. I have been making hummus for years and have concluded that despite the temptation to use canned chickpeas, the flavor is much better when it is made with dried chickpeas found at Middle Eastern or Indian food stores. 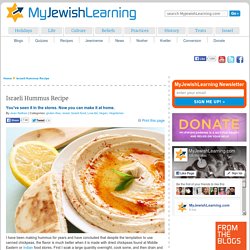 First I soak a large quantity overnight, cook some, and then drain and freeze the rest in two-cup batches in plastic bags. Whenever I need them for hummus, falafel, or for chickpea soups and stews , I just take them out of the freezer. When substituting canned beans, figure that one cup of raw chickpeas equals two cups of cooked or canned. Some old-time cooks in the Middle East either peel cooked chickpeas or pass them through a food mill before using them. I find there is no need for this laborious extra step. Reprinted with permission from The Foods of Israel Today (Knopf). Put the raw chickpeas in a bowl with cold water to cover and soak overnight. Za’atar. Za'atar is the Arabic name for an herb blend that is ubiquitous in Israeli cooking. 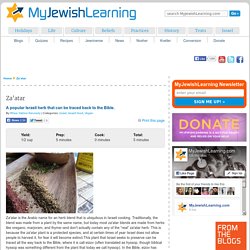 Traditionally, the blend was made from a plant by the same name, but today most za'atar blends are made from herbs like oregano, marjoram, and thyme–and don't actually contain any of the “real” za'atar herb. This is because the za'atar plant is a protected species, and at certain times of year Israel does not allow people to harvest it, for fear it will become extinct.This plant that Israel seeks to preserve can be traced all the way back to the Bible, where it is call eizov (often translated as hyssop, though biblical hyssop was something different from the plant that today we call hyssop).

In the Bible, eizov has many uses. Probably due to its antibacterial, antifungal, and antimicrobial properties, it is part of rituals for cleansing lepers (Leviticus 14:1-6) and purifying those who have come in contact with the dead (Numbers 19:5-6). Adapted from The Foods of Israel Today, by Joan Nathan. Salade de concombre à la menthe. Epluchez les gousses d'ail, coupez-les en deux, retirer le germe central et pilez-les finement dans un mortier. 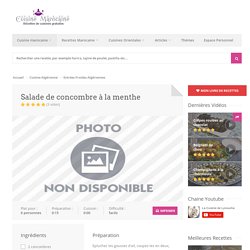 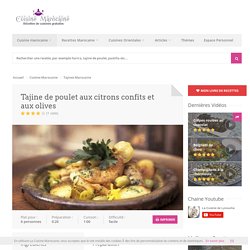 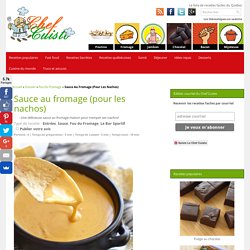 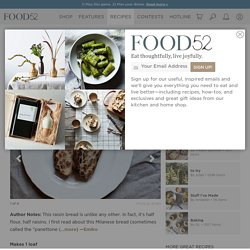 Find your friends who are already on Food52, and invite others who aren't to join. Let's GoLearn more Join Our Community Follow amazing home cooks. Collect recipes and articles. Sign Up ♦ 27  Save ▴ Poached Chicken & Egg Omelet Recipe. Easy Delicious Recipes. How to make Thai Peanut Sauce – 5 ingredients and you can make the most amazing homemade peanut sauce, get the easy recipe. 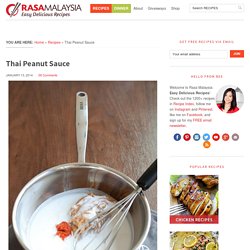 Thai peanut sauce is probably one of the most popular Asian dipping sauces, everyone loves the taste of peanut sauce as it’s so tasty, versatile, and addictive. Without saying, Thai peanut sauce goes well with skewers of sate or grilled meat, but it’s also amazing with other protein such as shrimp or fish. Most people think that Thai peanut sauce is hard to make and never attempted it at home but the reality is the exact opposite. Thai Chicken Sate Recipe. Made the satay for a BBQ last night, was a huge hit! 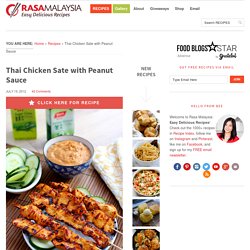 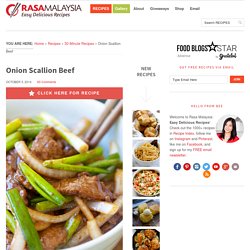 Delicious and easy recipe that takes only 20 mins. My 4-year old son has a completely different palate than us. While I cook mostly chicken as the main protein for dinners, little G dislikes chicken and will try to avoid eating chicken every time I try to sneak in some in his rice. He loves beef, and his favorite beef dish is Korean Kalbi. So naturally he prefers beef stir-fries instead of chicken stir-fries. Crab Rangoon. Crab Rangoon – BEST and EASIEST crab rangoon recipe with cream cheese and wonton wrapper. Quick, fool-proof and MUCH better than Chinese takeout!! Originally published June 12, 2011. Updated with new photos. Crab Rangoon is an appetizer found in many Chinese restaurants in the United States. Confessions of a Foodie: {Party Food} Harissa Chicken Wings with Herbed Yogurt Dipping Sauce. These tender baked Harissa Chicken Wings are addictive.

Heat oil in a large frying pan over medium heat. BBQ Pork Ears - kawaling pinoy. Remember when I posted this photo when I came back from my Philippine vacay last year and promised you a recipe for BBQ chicken asses? Forgive me for not delivering on my promise but I do have a good excuse. Salade d'oreille de porc. Fried Pig Ears with Hot Sauce. For the pig ears: Place the pig ears, carrots, garlic, celery, bay leaves onions and thyme in a large pot, and cover with water.

Bring to a boil, and then turn the heat down to a simmer. Cook until the ears can be pierced easily with a knife, 4 hours. For the hot sauce: Meanwhile, preheat the oven to 350 degrees F. Horseradish latkes with avocado, gravadlax & poached eggs. Juste1kif. Chicken Feet Recipe - Spicy. The Barbecued Chicken Feet recipe is my version for cooking the popular dimsum ingredient.

Chicken Feet is one of those dishes that you will either love or hate. It is mostly skin and you need to pick through the bones. It may look weird served on a plate but it surely tastes heavenly, or at least, for me. In Chinese restaurants, they are pretty pricey considering a plate with 3 pieces costs just the same as buying a kilogram raw and cooking it yourself. Sticky Walkie Talkies. Sticky Walkie TalkiesAs seen on Expresso www.expressoshow.com Serves 4 Ingredients: • 500 g cleaned chicken feet • 100ml tomato sauce • 60ml olive oil • 2 Tbs soya sauce • 3 Tbs braai and grill seasoning • 2 Tbs chicken spice • 1 tsp Worcester sauce, • 2 Tbs crushed chillies (fresh or dried) • 50ml cola • Handful of Fresh coriander. Method: Combine the tomato sauce, olive oil, soya sauce, braai seasoning, chicken spice, Worcester sauce, chillies and stir until all ingredients are combined to form the marinade. Place the feet into the marinade for about 15 - 20 minutes before putting them on the grid.

The fire must not be too high, medium will do. Grill the walkies, brushing them with marinade while braaing until just cooked. Sprinkle with chopped coriander and serve. Tajine de veau à la citronnelle.