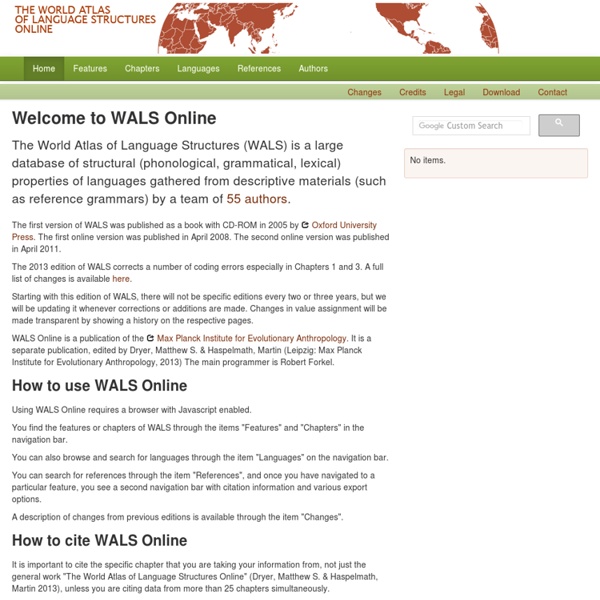 The World Atlas of Language Structures (WALS) is a large database of structural (phonological, grammatical, lexical) properties of languages gathered from descriptive materials (such as reference grammars) by a team of 55 authors. The first version of WALS was published as a book with CD-ROM in 2005 by Oxford University Press. The first online version was published in April 2008. The second online version was published in April 2011. The 2013 edition of WALS corrects a number of coding errors expecially in Chapters 1 and 3. A full list of changes is available here.

Earth - Can any animals talk and use language like humans? In April 2010, Adriano Lameira set up his video camera in front of an enclosure at Cologne Zoo in Germany. Inside was an orangutan called Tilda. There was a rumour that Tilda could whistle like a human, and Lameira, of Amsterdam University in the Netherlands, was keen to capture it on camera. But as the camera kept rolling, Tilda did much more than just whistle. She clapped her hands, smacked her lips, and let out a series of deep-throated human-like garbled sounds: almost like someone who had inhaled sulphur hexafluoride, a gas that makes your voice deeper. Lameira was baffled.

Uralic Family Uralic Komi-Permyak Komi-Zyrian Udmurt EFL Interactive Grammar Quizzes Printable & PPT Games - Click Here! If you are the type of person who prefers to have games on powerpoint or as printable handouts, we have been thinking of you. We offer board games, powerpoint games and more for the classroom and one to one teaching. They have made my lessons fun and I have no doubt yours will be fun too. Added to the good news are the templates we offer that you can use to create customized games for your classroom and teaching.

Shakespeare Plays Available in Video Format I am here attempting to provide as complete a survey as practical of the currently available versions of Shakespeare’s plays on mass-market tangible media. My main goal here has been to gather and organize information from various sources and make it available to teachers, students, and other interested individuals in homes and schools of every sort, in the hope that watching more Shakespeare will enhance appreciation of this remarkable body of work — both the plays themselves and their profound performance legacy. Watching a play on film or television is fundamentally different from watching the same play live on the stage, and there are advantages and disadvantages to each. Even filmed stage productions lack the essential immediacy of live theater.

The Red Book of the Peoples of the Russian Empire In the cliché-ridden propaganda of the Soviet era tsarist Russia was frequently dubbed the “prison of nations”. When the Soviets came into power this “prison”, by virtue of new national policies, transformed into a family of friendly and brotherly nations in whose bosom all the national cultures flourished. To boast of the achievements under the Communist Party leadership, grandiose cultural festivals were arranged in the Soviet republics, folkloristic dance, song and instrumental groups were established and the revival of old peasant culture was encouraged. The slogan “socialist in content, nationalist in form” came to be applied to the new Soviet culture.

Glossary Abduction : This is a term used by Peirce to refer to a form of inference (alongside and ) by which we treat a signifier as an instance of a rule from a familiar code , and then infer what it signifies by applying that rule. Aberrant decoding : Eco's term referring to decoding a text by means of a different code from that used to encode it. See also: Codes , Decoding , Encoding and decoding model of communication Absent signifiers : Signifiers which are absent from a text but which (by contrast) nevertheless influence the meaning of a signifier actually used (which is drawn from the same paradigm set). Two forms of absence have specific labels in English: that which is 'conspicuous by its absence' and that which 'goes without saying'. See also: Deconstruction , Paradigm , Paradigmatic analysis , Signifier

16 Scary Sayings for 'Ghost' From Across the United States On Halloween, the spirits of the dead are supposed to walk the earth with the living. Whether or not you believe that, or in ghosts in general, you might want to know what you’re getting into if you hear a South Carolina native mention a plat-eye or a Maine resident warn you about swogons. Familiarize yourself with these U.S. regional slang terms for familiar spirits from the Dictionary of American Regional English (DARE). Referring to a ghost, demon, or spirit, skookum is chiefly a Northwest term and comes from a language of the Chinook Native American peoples of the Pacific Northwest. In the Northwest and Alaska, skookum as an adjective means strong, powerful, or good, while a skookum house is a jail and a skookum chuck is a turbulent channel of water. More than just a Stephen King novel, tommyknocker has been used in the West since at least the early 20th century to mean a ghost that lives in a mine.

Cambridge Companions Online We use cookies to distinguish you from other users and to provide you with a better experience on our websites. Continue browsing to accept cookies or find out how to manage your settings. Open global navigation Contronyms: Negatives Without Positives Suffixes Sometimes antonyms are formed by appending the suffixes -ful and -less onto English words, as with joyful and joyless. But sometimes one is an English word and the other isn't. For example, reckless is an English word, and reckful is not. Other times, one is more commonly used than the other: ruthless and ruthful are both legitimate English words, but the former is used far more frequently than the latter. Special Cases

14 Words That Are Their Own Opposites Here’s an ambiguous sentence for you: “Because of the agency’s oversight, the corporation’s behavior was sanctioned.” Does that mean, 'Because the agency oversaw the company’s behavior, they imposed a penalty for some transgression' or does it mean, 'Because the agency was inattentive, they overlooked the misbehavior and gave it their approval by default'? We’ve stumbled into the looking-glass world of “contronyms”—words that are their own antonyms. 1. Sanction (via French, from Latin sanctio(n-), from sancire ‘ratify,’) can mean ‘give official permission or approval for (an action)’ or conversely, ‘impose a penalty on.’ *2. Oversight is the noun form of two verbs with contrary meanings, “oversee” and “overlook.”

Obvs is Phonological, and it's Totes Legit — Language Jones Recently, NPR ran a story called Researchers are Totes Studying how Ppl Shorten Words on Twitter. It was primarily focused on what they called 'clipping,' for which the author of the article provides the example "awks," for "awkward." As far as I know, aside from the researchers interviewed by NPR, no one has done any scholarly work on this phenomenon, and as far as I can find on JSTOR and Google Scholar, no one has published anything on it. The general consensus among regular folk is that the phenomenon is: annoyingassociated with young white womenthe result of character limits on Twitter, or choices about spelling economy in text messages.

Steve Huffman Language Maps Dr. Stephen Huffman Contents Abstract Totes « previous post | next post » Back in March, Lauren Spradlin gave a wonderful talk at PLC 39, under the title "OMG the Word-Final Alveopalatals are Cray-Cray Prev: A Morphophonological Account of Totes Constructions in English". It's been on my to-blog list ever since.