Selecting for impact: new data debunks old beliefs – Frontiers Blog. One of the strongest beliefs in scholarly publishing is that journals seeking a high impact factor (IF) should be highly selective, accepting only papers predicted to become highly significant and novel, and hence likely to attract a large number of citations. 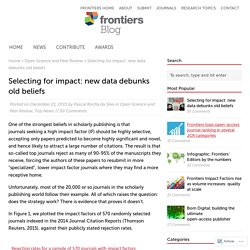 The result is that so-called top journals reject as many of 90-95% of the manuscripts they receive, forcing the authors of these papers to resubmit in more “specialized”, lower impact factor journals where they may find a more receptive home. Unfortunately, most of the 20,000 or so journals in the scholarly publishing world follow their example. All of which raises the question: does the strategy work? There is evidence that proves it doesn’t. In Figure 1, we plotted the impact factors of 570 randomly selected journals indexed in the 2014 Journal Citation Reports (Thomson Reuters, 2015), against their publicly stated rejection rates. But regardless of these considerations, the hard facts remain. This doesn’t end here… References. Born Digital: building the ultimate open-access publisher – Frontiers Blog.

By Pascal Rocha da Silva, Frontiers The digital disruption for analog film started in 1975 with the invention of the digital camera by Steven Sasson and ended with the bankruptcy of Kodak in 2012 (40 years later). 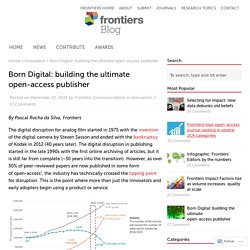 The digital disruption in publishing started in the late 1990s with the first online archiving of articles, but it is still far from complete (~30 years into the transition). However, as over 30% of peer-reviewed papers are now published in some form of open-access1, the industry has technically crossed the tipping point for disruption. This is the point where more than just the innovators and early adopters begin using a product or service. Figure 1: Projection of open access versus subscription articles: 2000-2021. Disruptions are driven by economic models that lower costs, and process models that increase efficiency. Digital online publishing dispenses of print, expensive offline processes, shipping of content and is therefore far more efficient. 1 B. 3. 4 A. Related. Open Access to science papers will be default by 2020, say European ministers – Frontiers Blog. By Emily Barker, Communications Strategist at Frontiers There was a breakthrough for open-access publishing on Friday 27 May, as EU research ministers published a commitment to make open access to scientific publications as the default option by 2020. 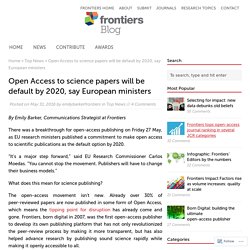 Open-access publishing will also help bring more science into the spotlight. However, Frontiers found that there was no correlation between rejection and impact. Frontiers citations rates are amongst the very highest when compared to journals in the same categories with low rejection rates. Related. Global Open Access Portal. The Global Open Access Portal (GOAP) funded by the Governments of Colombia, Denmark, Norway, and the United States Department of State, presents a current snapshot of the status of Open Access (OA) to scientific information in 158 countries worldwide. 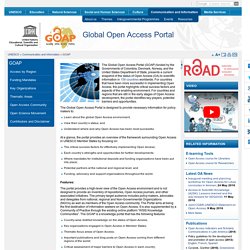 For countries that have been more successful in implementing Open Access, the portal highlights critical success factors and aspects of the enabling environment. For countries and regions that are still in the early stages of Open Access development, the portal identifies key players, potential barriers and opportunities. The Global Open Access Portal is designed to provide necessary information for policy-makers to: Learn about the global Open Access environment;View their country’s status; andUnderstand where and why Open Access has been most successful. At a glance, the portal provides an overview of the framework surrounding Open Access in UNESCO Member States by focusing on: ROAD Home page. Roadmap_final_formatted_20150203.pdf. J-STAGE Home. Redalyc. Redalyc. Latin America, the Caribbean, Spain and Portugal Scientific Journals Network.