Voici un aperçu international de musées de migrations présents sur Internet. Unesco.org - UNESCO-IOM Migration Museums Initiative. UNESCO-IOM Migration Museums Initiative The current trend in the development of ‘migration museums’, named differently worldwide, is an interesting phenomenon, as it may contribute to the creation of a new and multiple identity, at an individual and collective level. 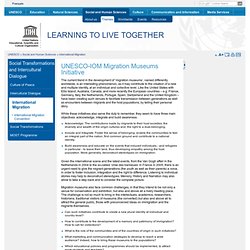 Like the United States with Ellis Island, Australia, Canada, and more recently the European countries – e.g. France, Germany, Italy, the Netherlands, Portugal, Spain, Switzerland and the United Kingdom – have been creating such venues to facilitate transmission between generations as well as encounters between migrants and the host populations, by telling their personal story. While these initiatives also serve the duty to remember, they seem to have three main objectives: acknowledge, integrate and build awareness.

AUSTRALIE - Migration Museum. BELGIQUE - Red Star Line Museum. Book your ticket Would you like to visit the museum during the weekend? 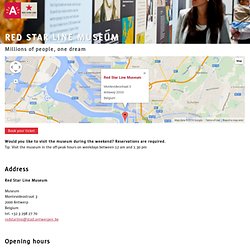 Reservations are required.Tip: Visit the museum in the off-peak hours on weekdays between 12 am and 1.30 pm Address Red Star Line Museum MuseumMontevideostraat 32000 AntwerpBelgiumtel. +32 3 298 27 70redstarline@stad.antwerpen.be Opening hours Tuesday - Friday: 10 a.m. to 5 p.m.Saturday and Sunday: 10 a.m. to 6 p.m. Closed on Mondays, January 1, May 1, Assumption, November 1 and December 25. ​ 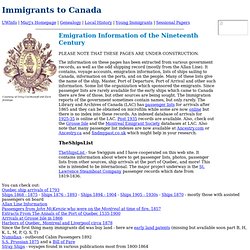 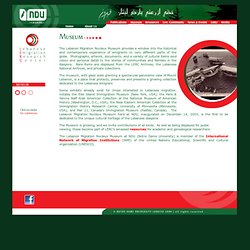 Photographs, artwork, documents, and a variety of cultural items lend colour and personal detail to the stories of communities and families in the diaspora. Rare items are displayed from the LERC Archives, the Lebanese National Archives, and private collections. The museum, with glass walls granting a spectacular panoramic view of Mount Lebanon, is a place that protects, preserves and presents a growing collection dedicated to the Lebanese emigrant. The Museum is growing, and we invite contributions of all kinds. As well as being displayed for public viewing, these become part of LERC’s amassed resources for academic and genealogical researchers.

NORVEGE - Det norske Utvandrersenteret. The Norwegian Emigration Center: Does genealogy work for all of NorwayGives you tips on internet - sourcesArranges genealogy - coursesActs as a contact liason between families in Norway and the USA. 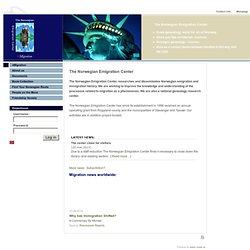 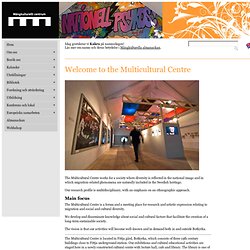 Our research profile is multidisciplinary, with an emphasis on an ethnographic approach. Main focus The Multicultural Centre is a forum and a meeting place for research and artistic expression relating to migration and social and cultural diversity. We develop and disseminate knowledge about social and cultural factors that facilitate the creation of a long-term sustainable society. The vision is that our activities will become well-known and in demand both in and outside Botkyrka.

The Multicultural Centre is located in Fittja gård, Botkyrka, which consists of three 19th century buildings close to Fittja underground station. The centre was founded in 1987 by the municipality of Botkyrka. Opening hours. SUEDE - Världskultur museerna. USA - The Statue of Liberty & Ellis Island.