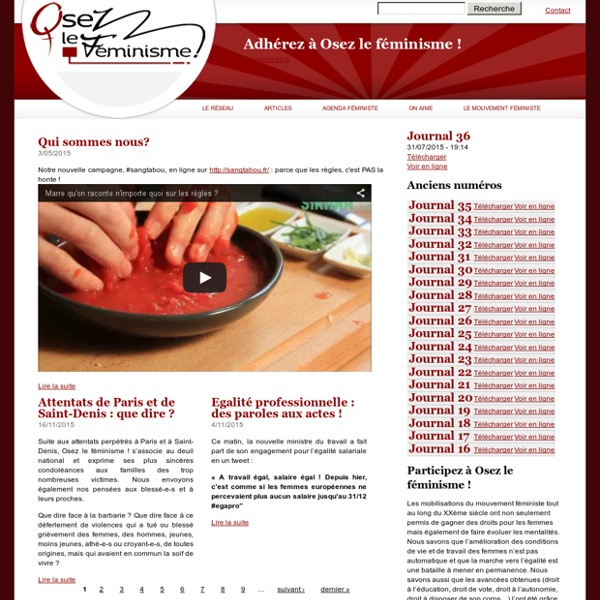 How one design agency is fighting for feminism I am a feminist. My penis doesn't preclude me from being one. I feel pretty confident in saying this, because my liberal politics, my good grooming and the fact I do all the cooking and cleaning in my house mean that I'm a living paradigm of Modern Man. I have assimilated the acceptable bits of the feminine, but remain confident in my manhood because, let's face it, my Mrs will never earn what I do, and even as she progresses up the career ladder, she's gotta take time off to look after the kiddies…

Easy Vegan Cheesecake Friends, few times have I been more excited to share a recipe with you as I am today. This recipe has been taste tested and approved by 6 of my closest foodie friends and heartily approved. And they weren’t even vegan! I even like these better than real cheesecakes, which I can no longer stomach with my dairy intolerance. Crisis, averted. These 7 ingredient beauties begin with a 2-ingredient crust! Fund Abortion Now.org There are abortion funds in many communities around the U.S. To find your local abortion fund, please use the search function below. In some cases, there will be more than one abortion fund that can help you. If you haven't made your appointment yet but you know which state your clinic will be in, go ahead and include that information. Bangladesh man 'admits' cutting off wife's fingers 15 December 2011Last updated at 23:42 By Anbarasan Ethirajan BBC News, Dhaka Ms Akther hopes to continue her studies using her left hand to hold a pen Human rights groups in Bangladesh have demanded a severe punishment for the husband of a young woman who allegedly cut off most of her right hand.

Repair Her Armor ...1 month ago throwdownyourhat submitted: I’m not a big fan of anime, but I do tend to leave Cartoon Network on when I’m using my computer and sometimes I end up watching a bit of it every now and again.As that is, I noticed an absolutely atrociously inappropriate outfit on a young lady (Chi Chi from Dragon Ball) and I immediately felt the call to fix it for her. I took the liberty of embellishing upon the design already present, giving her a jumpsuit instead of a bikini, and flattening her chest as well as rounding out her waist area to emphasize her youth. What I find most disturbing about the unfixed version is the chest.

manystuff.org – Art & Design » Blog Archive » A History of its Own? Graphic Design and Feminism A History of its Own? Graphic Design and Feminism This free and public seminar includes three talks and a panel discussion about the status of feminism in graphic design today. call (669) 221-6251 feminist phone intervention next time someone demands your digits and you want to get out of the situation, you can give them this number: (669) 221-6251. when the person calls or texts, an automatically-generated quotation from feminist writer bell hooks will respond for you. protect your privacy while dropping some feminist knowledge when your unwanted “suitor” calls or texts. because we’re raised to know it’s safer to give a fake phone number than to directly reject an aggressive guy. because we’re raised to know that evasion or rejection can be met with violence. because women are still threatened and punished for rejecting advances.

Tory feminists: the true blue sisterhood The woman in the photograph is smiling a fixed, red-lipsticked smile that doesn't quite reach her eyes. Snapped against a wall, she wears a black T-shirt with the words "This is what a feminist looks like" in defiant white letters across her chest. She was part of a campaign four years ago to challenge assumptions about feminism, and she encapsulates both why it was needed and how fast things can change. For the model is Theresa May, and, as her expression suggests, at the time this was a decidedly risky stunt for her. Vintage Family Product Ads... Only for Ads Vintage Family Product Ads... Labels: Rare Commercials, Vintage Commercials 0 comments: Post a Comment Newer PostOlder PostHome

Discrimination By Design: Time To Get Rid Of Design Patriarchy A couple of days ago, I was reading this brilliant article on “Discrimination by Design” by ProPublica, whose work I keenly follow. The article points out some of the ways in which design discriminates amongst different people in the society and hence treats them differently. This got me wondering about certain things around me that I have certainly found awkward, but haven’t really thought about them from a discriminatory angle. But then, in the ‘man-made’ world, what else could one expect?

About us Diana Nammi IKWRO was founded (as the Iranian and Kurdish Women’s Rights Organisation) in 2002 by our Executive Director, Diana Nammi. Since our foundation, as testament to the success of our work and in response to the need for culturally specific support, advocacy and counselling for women from the Middle East and Afghanistan, our services have been extended to several vulnerable communities in the United Kingdom.