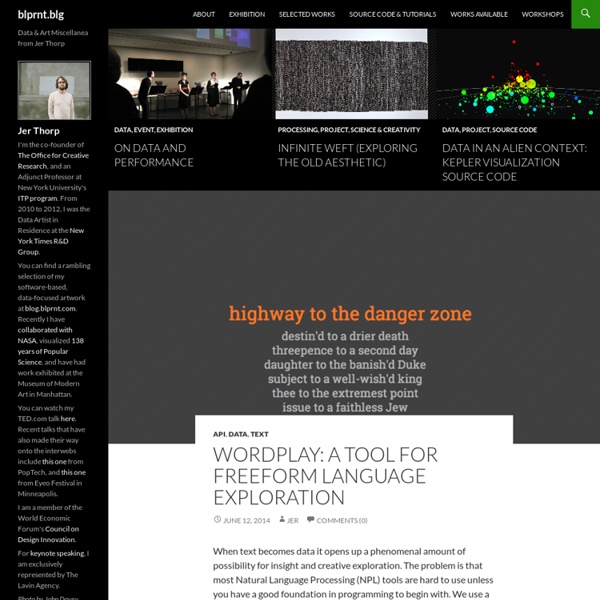 Ex-Apple Designer Creates Teaching UI That "Kills Math" Using Data Viz We hear a lot of design manifestos around here. But Bret Victor's stuck out: He wants to kill math. He's no Luddite, though -- he thinks mathematics is one of the most powerful, transcendent ways humans have for understanding and changing the world. What he wants to kill is math's interface: opaque, abstract, unfamiliar, hard. "The power to understand and predict the quantities of the world should not be restricted to those with a freakish knack for manipulating abstract symbols," he writes.

Random Number Multiples About seven years ago, I had a bit of a career crisis. I was freelancing – working for clients I didn’t care much about on projects that I didn’t care much about, and feeling that there was a huge distance between the work that I was creating and my physical self. I was sick of computers, and was considering a range of (in hindsight) ridiculous vocational changes. My rescue didn’t come from a new programming language, or a faster computer, or even better clients. The Do's And Don'ts Of Infographic Design Advertisement Editor’s Note: You might want to read Nathan Yau’s article The Do’s And Don’ts Of Infographic Design: Revisited1 here on Smashing Magazine which is a response to this article. Since the dawn of the Internet, the demand for good design has continued to skyrocket. From Web 1.0 to Web 2.0 and beyond, designers have remained on their toes as they define the trends and expectations of our online universe. The Internet is a great designer’s playground, and online businesses are growing more and more appreciative of what can be gained from a bit of well-executed eye candy.

Yvonne Cagle (6/2007) Yvonne Darlene Cagle, M.D. (Colonel, USAF) Space and Life Sciences Directorate Johnson Space Center PERSONAL DATA: Born in West Point, New York, but considers Novato, California, to be her hometown. Enjoys jigsaw puzzles, juggling, skating, hiking, music, writing, public speaking, historical novels. EDUCATION: Novato High School Novato, California, in 1977; received a bachelor of arts degree in biochemistry from San Francisco State University in 1981, and a doctorate in medicine from the University of Washington in 1985. Transitional internship at Highland General Hospital, Oakland, California, in 1985. Pedagogy meets Big Data and BIM – Big Data, Sensing and Augmented Reality: Paper and Key Note Presentation In June 2013 The Bartlett held a conference entitled ‘Pedagogy meets Big Data and BIM’. The conference brought together over 100 participants from across the United Kingdom, European Union and the United States from diverse backgrounds such as academic institutions, government and industry – including ARUP, Autodesk, Balfour Beatty, BAM, and Royal Institute of British Architects. The Faculty’s motivation to focus on BIM (Building Information Modelling) and Big Data (deriving from the exponential growth of the profession’s access to spatial statistics) was the realisation that innovation, collaboration and technology are rewriting industry practice in profound ways and must also reshape the built environment curricula.

Digital storytelling: A tutorial in 10 easy steps “Thankful,” a digital story by Sarah Schmidt. How to create a polished, powerful digital story for yourself or your nonprofit Target audience: Nonprofits, social change organizations, educators, foundations, individuals. Brainstorm Tech 2012 To view select sessions from 2012 Fortune Brainstorm TECH on demand, click here. Registration is complimentary and required. To read session wrap-ups, blogs and more on Fortune.com, click here. Presented in Association with Fortune Brainstorm TECH is a marketplace of ideas that assembles the smartest people we know — the world’s top technology and media thinkers, operators, entrepreneurs, innovators, and influencers. These leaders inspire a conversation that informs Fortune’s editorial coverage throughout the year.

Venngage: And Yet Another Online Infographics Editor After 2 very similar posts in a very small timeframe, featuring Easel.ly and infogr.am respectively, I seem not to be able to follow the 'automatic infographics editing' scene fast enough. Automatic resume infographics creator visualize.me has just launched Venngage [venngage.com], which aims to empower people to create beautiful infographics in minutes, so that "creating infographics [becomes] as easy as creating a Powerpoint presentation". As a unique feature, Venngage's visual elements are displayed as pure HTML elements, which should positively influence SEO stats, page ranks and back links.

Getting started with visualization after getting started with visualization It's easy these days to get started with visualization. There are a lot of resources — books, tutorials, blogs, and classes — to help you learn, and the many new and old software applications let you work with data right away, point and click. You don't have to stop here though. A lot of people do stop at this point. Mr. Harry C. Hui The brands under management include Pepsi Cola (China's #1 Cola drink), Gatorade, Tropicana, Dole, 7UP, Mirinda, Starbucks as well as other locally developed brands. For the past decade, Harry C. Hui has been at the forefront of the media and music industries in Asia. Under leadership, WCM scored numerous #1 hits across the region and won Publisher of the Year awards in Hong Kong, Singapore and Malaysia from 1996-1998.