Visual learning and outlining in the classroom 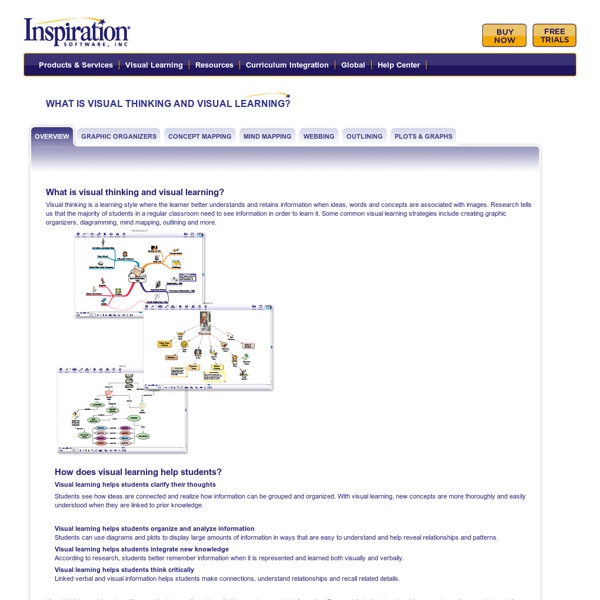 Visual thinking is a learning style where the learner better understands and retains information when ideas, words and concepts are associated with images. Research tells us that the majority of students in a regular classroom need to see information in order to learn it. Some common visual learning strategies include creating graphic organizers, diagramming, mind mapping, outlining and more. Visual learning helps students clarify their thoughts Students see how ideas are connected and realize how information can be grouped and organized. With visual learning, new concepts are more thoroughly and easily understood when they are linked to prior knowledge. Visual learning helps students organize and analyze information Students can use diagrams and plots to display large amounts of information in ways that are easy to understand and help reveal relationships and patterns. Visual thinking and learning utilize graphical ways of working with ideas and presenting information.

Information mapping Information Mapping is a technique that divides and labels information to facilitate comprehension, use, and recall. It was originally developed by Robert E. Horn.[1] Overview[edit] Information Mapping is a research-based method used to analyze, organize and present information based on your audience’s needs and the purpose of the information. Course of Actions - Task Flow Mapping Your Day One of the things I’ve found when listing out tasks and actions, is the difficulty of organizing a list into a logical flow. Most of my day is filled with tasks that I need or want to complete in a specific order, and I wanted a simple way to map out the flow of my day. When I set out to find a way to do this, I had several criteria in mind: It had to be simple – I didn’t want a lot of options or stuff to fill in. Just a quick way to map out the actions for my day.It had to be flexible – Even though I know what tasks or actions I want to perform during the course of my day, things invariably come up. So it needed to be able to fit these items in, without interrupting the flow.It would not be time-based – I have other ways of covering time-based stuff.

Education Home of everything Gamification Education -- research, community, case studies and more -- as part of the Gamification.org family of wikis. Want to help us create this website? Contact us! Introduction Education affects everyone. It's how humans learn both explicit material (facts, dates, formulas, methods) and implicit material (critical thinking, attitudes, judgement). Auditory Memory: The Overlooked Learning Skill Deficiency 02 Oct Auditory Memory: The Overlooked Learning Skill Deficiency A weakness in auditory memory can have serious consequences in the realm of learning for students, states educational therapist Addie Cusimano in her book Learning Disabilities: There is a Cure. Auditory memory involves being able to take in information that is presented orally, to process that information, store it in one’s mind and then recall what one has heard. Basically, it involves the skills of attending, listening, processing, storing, and recalling.

Information design Information design is the practice of presenting information in a way that fosters efficient and effective understanding of it. The term has come to be used specifically for graphic design for displaying information effectively, rather than just attractively or for artistic expression. Information design is closely related to the field of data visualization and is often taught as part of graphic design courses.[1] Syrian Journey The Syrian conflict has torn the country apart, leaving thousands dead and driving millions to flee their homes. Many seek refuge in neighbouring countries but others pay traffickers to take them to Europe - risking death, capture and deportation. If you were fleeing Syria for Europe, what choices would you make for you and your family? Take our journey to understand the real dilemmas the refugees face.

Auditory or Echoic Short-Term Memory - Cognitive Skill What is auditory or echoic memory? Auditory memory, also known as echoic memory, is one of the sensory memory registries. This type of sensory memory is short, but is resistant to brain injury. People who suffer from severe amnesia continue to have this type of sensory memory in tact. Auditory memory or echoic memory is a component that makes up our sensory memory that is in charge of all of the short-term auditory information that we receive from our environment. What a Hundred Million Calls to 311 Reveal About New York New Yorkers are accustomed to strong odors, but several years ago a new aroma began wafting through the city’s streets, a smell that was more unnerving than the usual offenders (trash, sweat, urine) precisely because it was so delightful: the sweet, unmistakable scent of maple syrup. It was a fickle miasma, though, draping itself over Morningside Heights one afternoon, disappearing for weeks, reemerging in Chelsea for a few passing hours before vanishing again. Fearing a chemical warfare attack, perhaps from the Aunt Jemima wing of al Qaeda, hundreds of New Yorkers reported the smell to authorities.

Mind map A mind map about educational technology A mind map is a diagram used to visually organize information. A mind map is hierarchical and shows relationships among pieces of the whole.[1] It is often created around a single concept, drawn as an image in the center of a blank page, to which associated representations of ideas such as images, words and parts of words are added. Major ideas are connected directly to the central concept, and other ideas branch out from those major ideas. Mind maps can also be drawn by hand, either as "rough notes" during a lecture, meeting or planning session, for example, or as higher quality pictures when more time is available. Mind maps are considered to be a type of spider diagram.[2] A similar concept in the 1970s was "idea sun bursting".[3]

Most students don't know when news is fake Preteens and teens may appear dazzlingly fluent, flitting among social-media sites, uploading selfies and texting friends. But they’re often clueless about evaluating the accuracy and trustworthiness of what they find. Some 82% of middle-schoolers couldn’t distinguish between an ad labeled “sponsored content” and a real news story on a website, according to a Stanford University study of 7,804 students from middle school through college. Parts of the Brain Involved in Memory Memory is a complex function that involves multiple steps, starting with the input of the stimulus to the brain and ending with independent memory retrieval. Georgia Tech states that human memory is made up of three basic stages: sensory memory, where information is derived from touch; visual or aural; short-term memory and long-term memory. The different steps in memory retention take place throughout the brain. The prefrontal cortex, which is part of the brain’s frontal lobe, is the region responsible for short-term memory. The Canadian Institutes of Health Research states that the human prefrontal cortex is highly developed, resulting in the complex functions and manipulation of memory. The prefrontal cortex is referred to as the “coordinator” in short-term memory, as it is involved in the ways in which memories are used.

15 Stunning Examples of Data Visualization Data Visualization is a method of presenting information in a graphical form. Good data visualization should appear as if it is a work of art. This intrigues the viewer and draws them in so that they can further investigate the data and info that the graphic represents.