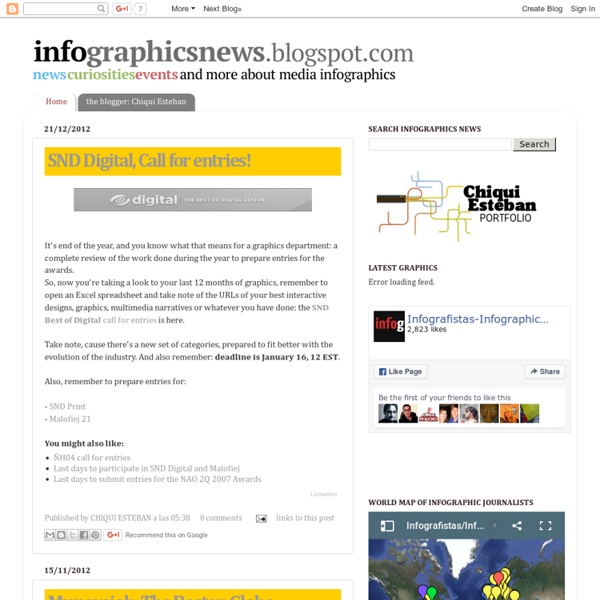 Gapminder: Unveiling the beauty of statistics for a fact based world view. Statistics and Design - By the Numbers Blog - NYTimes.com Matthew Ericson – ericson.net The winners of the 34th Edition of the Best of News Design contest were released today, so I’ve updated my interactive crosstab of SND winners that lets you see at a glance which publications won awards in which categories. One particularly interesting thing to me: There were only 19 awards give in the information graphics categories — 17 for individual works and 2 for portfolios. That’s down from 97 just three years ago. I’d be curious to know how much of the decline comes from fewer print graphics being produced in general in newspapers — and probably also fewer entries in the contest — and how much is from a different, and much tougher, set of judges than in past years. Just pushed out an update to the Adobe Illustrator MultiExporter script that lets you specify if you want to export PNGs and JPGs at a different scale factor so that you can generate versions of the images at double resolution for iPhone retina displays. I’ve posted the slides from my presentation as a PDF.

FlowingData | Data Visualization, Infographics, and Statistics Flip Flop Fly Ball April 10, 2014: Catching up It's been a while. Off-season came and went, I spent a couple of months in London, lived in a hotel for a while, and now have a new apartment a stone's throw from the stadium of my Mexican soccer team of choice, Cruz Azul. I've not done any infographics about baseball in that time. Weird. November 1, 2013: Day of the Dead Baseball Teams Walking around my neighbourhood (Coyoacán) the other day, I was thinking about the Expos, and seeing people setting up stuff for the Day of the Dead, I put those two things together and drew an ofrenda for the teams that relocated. October 28, 2013: Árbol de Béisbol This is something I've been working on (slowly) for over two years. October 18, 2013: Switching the -stons There was a moment in last night's Tigers-Red Sox game, when the camera showed David Ortiz from a three-quarter-ish view, and I saw just a few letters on his road jersey: STON. October 16, 2013: Balls in logos Fourteen major league teams have balls in their logos.

chartsnthings 19 Sketches of Quarterback Timelines On Sunday Eli Manning started his 150th consecutive game for the Giants, the highest active streak in the NFL and the third-longest streak in NFL history. (One of the other two people above him is his brother, Peyton.) The graphics department published an interactive graphic that put Eli’s streak in the context of about 2,000 streaks from about 500 pro quarterbacks. The graphic lets you explore the qbs and search for any quarterback or explore a team to go down memory lane for your team. It’s not particularly important news, but the data provided by pro-football-reference is incredibly detailed and the concept lended itself to a variety of sketches. A couple bar charts in R. And percent of games started (the people are 100% are players like Andrew Luck or RGIII who just haven’t played a lot of seasons.) Ported to a browser, just using total starts: And share of total possible starts …or all the way back to 1970

This American Infographic Today I listened to Episode 2. It’s funny how current this whole program sounds, everything seeming perfectly natural as “the recession” and it’s effects were mentioned. While listening to the segment on the hacker/phreaker/phishers I wondered about what kind of internet crimes are committed nowadays, so I found some data on that. I also found poet Michael Warr’s description of his schedule as a Jehovah’s Witness very interesting. It was harder to create an infographic for this one than the first one. While doing the research I found this interesting summary of cybercrime cases (at justice.gov). The Daily Viz | By Matt Stiles Chart Porn