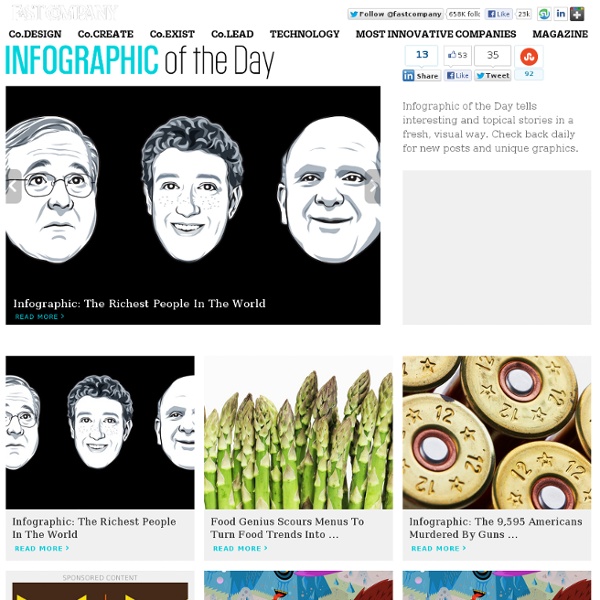 Visualization Pantheon, a project from the Macro Connections group at The MIT Media Lab, explores cultural influences across countries and domains. To make our efforts tractable, Pantheon will not focus on culture, as it is understood in its broadest sense, but on cultural production. In a broad sense, culture can be understood as all of the information that humans—or animals [1]—generate and transmit through non-genetic means [2]. At Pantheon, however, we do not focus on the entire range of cultural information, but in a subset of this information that we define narrowly as cultural production. That is, we do not focus on cultural information such as passed on family values or societal trust [3], but on cultural production as proxied by the biographies of notable historical characters. DataVis.ca Gallery of Data Visualization This Gallery of Data Visualization displays some examples of the Best and Worst of Statistical Graphics, with the view that the contrast may be useful, inform current practice, and provide some pointers to both historical and current work. We go from what is arguably the best statistical graphic ever drawn, to the current record-holder for the worst. Like good writing, good graphical displays of data communicate ideas with clarity, precision, and efficiency. Like poor writing, bad graphical displays distort or obscure the data, make it harder to understand or compare, or otherwise thwart the communicative effect which the graph should convey. [See the Bad Writing Contest for examples of The Best of Bad Writing.

Why America's Healthcare Sucks You know it is true. According to the CDC, over 40 million Americans did not have health insurance during 2009. Obviously something has to change, but socialized medicine is not the answer. It is just one possible solution. Now that I have put myself in a political grey area, I will continue on with this topic. What Are The Hardest Languages To Learn? [INFOGRAPHIC] Learning a new language can be difficult, but some languages can be trickier than others. For native English speakers, the difficulty level of a new language depends on a variety of factors. So which are the most difficult to learn? And which languages would you be able to master in under a year?

10 Awesome Tools To Make Infographics Who can resist a colourful, thoughtful venn diagram anyway? In terms of blogging success, infographics are far more likely to be shared than your average blog post. This means more eyeballs on your important information, more people rallying for your cause, more backlinks and more visits to your blog. In short, a quality infographic done well could be what your blog needs right now. Designing An Infographic Some great tips for designing infographics: The American identity according to social media #infographic What can we learn about the people of America from statistical data? According to this infograph from Hasai, we know that: 9/10 Americans are online77% report that they use social media to share their love of a TV show70% of active US Facebook users log in every day48% of bloggers are US based40% of Americans are following products, services and brands on social media platformsVideo games account for 10% of all US internet time

What Shapes Our Language? Our language is constantly being shaped by a number of different influences, from social media and pop culture to other languages and even human error. Thanks to the ever-evolving Internet, new words enter our language almost daily. But beyond new words, technology has had a big impact on the ways in which we communicate, particularly with respect to how many words it takes us to get our point across. View the infographic below to learn more. (Click Image To Enlarge) Use This Infographic In Your Class

20 Examples Of Infographs That You Don’t See Every Day | I think we all know what an infograph is, and nowadays they are increasingly popular. The bad thing is that almost all of them are becoming boring and very similar. In this article I have collected 20 infographs that are very unique design and also interesting subjects. Twitter Dots: Mapping all Tweets for a specific Keyword