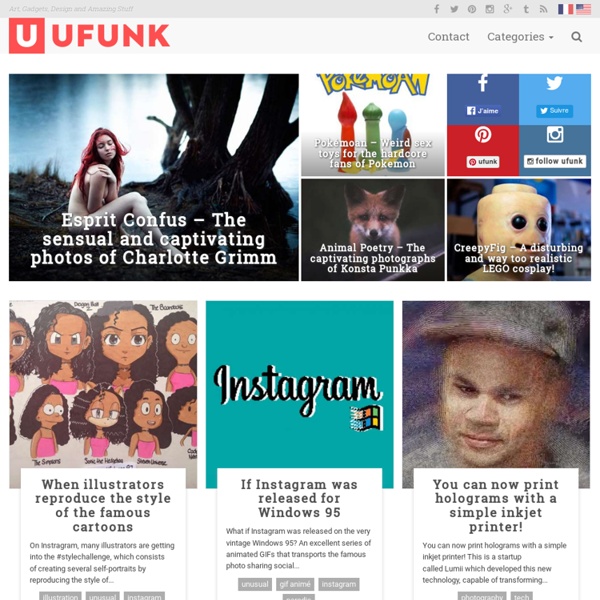 [62 pictures] UFUNK – The Week End Selection n°84 As the chocolate eggs hidden in the garden, it is now time to discover the Week End Selection n°84! As every weekend, here is a new selection of WTF,... Sunset Lights and Broken Mirrors – 13 amazing photographs by Bing Wright “Broken Mirror/Evening Sky“, a beautiful series of photographer Bing Wright, who capture the captivating lights of sunsets through broken mirrors…... Marshmallow Cat – Cute and adorable Japanese sweets… Here are the “CafeCat“, some adorable marshmallows in the shapes of little kittens and cat paws, designed by Japanese confectioner Marshmallow... 24 new vintage Super Heroes portraits A new selection of creations by Italian artists Marvellini Brothers, based in Milan, who create portraits of superheroes and iconic characters of pop...

Photo Inspiration Who doesn’t love baby photography, One of the most challenging and time consuming type of photography. It is easily one of the hardest kinds just because of the sheer amount of unexpected drama with the kids. It is also one of the most popular kind of photography too. You see baby photography all around. This gives you an idea... read more Rides Building on the successful design of the GLE Coupe, Mercedes just introduced the more compact GLC Coupe Concept at Auto Shanghai. With an eye on the BMW X4, Mercedes deftly blends coupe and SUV in one aggressive sheet metal package that Mercedes refers to as a “near production-standard study.” Clearly designed to highlight its exterior styling, the GLC comes complete with a twin-blade front grill, 21-inch wheels, and “power-domes” on the hood that emphasize MB’s credo of “Born to race on every ground.” Speaking of power, the GLC borrows the twin-turbo V-6 from their friends at AMG that puts out a very capable 367 hp and 384 lb-ft of torque. We’ll keep our fingers crossed that this “study” makes its way to the showroom very soon. With the goal of reviving old-school craftsmanship in the bike world, The Handbuilt Motorcycle Show invaded Austin this past weekend.

The Sexperience 1000 Welcome to The Sexperience 1000, an interactive journey through the sexual experiences and preferences of one thousand British individuals. What’s the favourite sexual position of iPhone users in the North? Do country music lovers over 55 prefer to do it in the dark? Explore the 20 questions of our survey and discover what the great British public get up to between the sheets… Filter Filter by region, age, etc. and compare to yourself. Funny The rights to broadcast highlights from NCAA March Madness basketball games are held by CBS until the day after the game. This leaves local stations not affiliated with CBS unable to show their viewers clips from the games they’re reporting on. An ABC affiliate in Florida took this problem and had some fun with it, recreating the game’s best moments in their office and playing those clips as the sports anchor read the actual game highlights on the air… If you need to stand on a chair just to jump over the edge of the snowbank that’s blocking your front door, you might be in Newfoundland… (via Tastefully Offensive)

Portfolios Doble-exposure paintings from Pakayla Rae Biehn “We have seen double-exposure photography style paintings before, but Pakayla Rae Biehn breathes a new life into the imagery she uses. These subtly erotic pieces are youthful and delicate. The Flight From Conversation At home, families sit together, texting and reading e-mail. At work executives text during board meetings. We text (and shop and go on Facebook) during classes and when we’re on dates. My students tell me about an important new skill: it involves maintaining eye contact with someone while you text someone else; it’s hard, but it can be done. Over the past 15 years, I’ve studied technologies of mobile connection and talked to hundreds of people of all ages and circumstances about their plugged-in lives. I’ve learned that the little devices most of us carry around are so powerful that they change not only what we do, but also who we are.

32 Awesome Pictures That Are Either Perfectly Timed Or Brilliantly Photoshopped. Random Articles Popular Articles Wall to WatchShowcasing human creativity since 2011. New articles every day. Various ways to subscribe here. Funny 32 Awesome Pictures That Are Either Perfectly Timed Or Brilliantly Photoshopped. Smart, dumb, candybar, flip, and brick: a visual history of mobile phones For most of their history, mobile phones have been shrinking. Small meant portable; it even, in the not too distant past, was a sort of status symbol. Remember Motorola’s runaway hit, the ultra-thin Razr? But something funny happened on the smartphone’s way to success. Even as the phones themselves became thinner and lighter, their screens started to grow. Pretentious Is Not A Sexual Orientation ‘Sapiosexual’ has to be one of the stupidest sexual ‘identities’ to come along in years. New words with the suffix “-sexual” are like catnip for trendy straight people. In the late ’90s and early aughts, we collectively endured the “metrosexual,” a completely unnecessary term for a man who shaves and dares to have a few pastels in his wardrobe. And in the past year, we have watched the rise and fall of the “lumbersexual,” a completely unnecessary term for a man who doesn’t shave and wears flannel. Enter the “sapiosexual,” which Urban Dictionary defines as “one who finds intelligence the most sexually attractive feature.”

The Coronation For years, normality has been stretched nearly to its breaking point, a rope pulled tighter and tighter, waiting for a nip of the black swan’s beak to snap it in two. Now that the rope has snapped, do we tie its ends back together, or shall we undo its dangling braids still further, to see what we might weave from them? Covid-19 is showing us that when humanity is united in common cause, phenomenally rapid change is possible. None of the world’s problems are technically difficult to solve; they originate in human disagreement. In coherency, humanity’s creative powers are boundless.