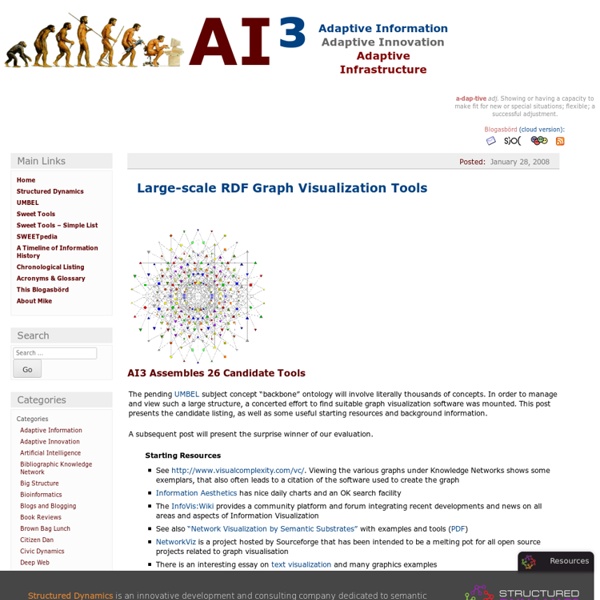 AI3 Assembles 26 Candidate Tools The pending UMBEL subject concept “backbone” ontology will involve literally thousands of concepts. In order to manage and view such a large structure, a concerted effort to find suitable graph visualization software was mounted. A subsequent post will present the surprise winner of our evaluation. Starting Resources See Various Example Visualizations For grins, you may also like to see various example visualizations, most with a large-graph bent: Software Options Here is the listing of 26 candidate graph visualization programs assembled to date: Cytoscape – this tool, based on GINY and Piccolo (see below), is under active use by the bioinformatics community and highly recommended by Bio2RDF.org GINY implements a very innovative system for sub-graphing and allows for stunning visuals. headline: Large-scale RDF Graph Visualization Tools alternativeHeadline: author: Mike Bergman image: description: articleBody: see above

Cytoscape: Hands-down Winner for Large-scale Graph Visualization I still never cease to be amazed at how wonderful and powerful tools are so often and easily overlooked. The most recent example is Cytoscape, a winner in our recent review of more than 25 tools for large-scale RDF graph visualization. We began this review because the UMBEL subject concept “backbone” ontology will involve literally thousands of concepts. Graph visualization software suitable to very large graphs would aid UMBEL’s construction and refinement. Cytoscape describes itself as a bioinformatics software platform for visualizing molecular interaction networks and integrating these interactions with gene expression profiles and other state data. Cytoscape is partially based on GINY and Piccolo, among other open-source toolkits. Cytoscape was first brought to our attention by François Belleau of Bio2RDF.org. Requirements We had a number of requirements and items on our wish list prior to beginning our review. Features and Attractions Other Cytoscape Resources Plugins Initial Use Tips

Metadata? Thesauri? Taxonomies? Topic Maps! Making sense of it all Abstract To be faced with a document collection and not to be able to find the information you know exists somewhere within it is a problem as old as the existence of document collections. Information Architecture is the discipline dealing with the modern version of this problem: how to organize web sites so that users actually can find what they are looking for. Information architects have so far applied known and well-tried tools from library science to solve this problem, and now topic maps are sailing up as another potential tool for information architects. The paper argues that topic maps go beyond the traditional solutions in the sense that it provides a framework within which they can be represented as they are, but also extended in ways which significantly improve information retrieval. Table of contents 1. The task of an information architect is to create web sites where users can actually find the information they are looking for. 2. 2.1. Metadata 2.2. title

RelFinder - Visual Data Web Are you interested in how things are related with each other? The RelFinder helps to get an overview: It extracts and visualizes relationships between given objects in RDF data and makes these relationships interactively explorable. Highlighting and filtering features support visual analysis both on a global and detailed level. Check out the following links for some examples: The RelFinder can easily be configured to work with different RDF datasets. The RelFinder can also be more deeply integrated with your project: Integrating the RelFinder See the following examples of how the RelFinder is integrated into other projects: Ontotext applies the RelFinder to enable an exploration of relationships in the biomedical domain. The RelFinder is readily configured to access RDF data of the DBpedia project and only requires a Flash Player plugin to be executed (which is usually already installed in web browsers). All tools on this website are research prototypes that might contain errors.

Triplestore Much like a relational database, one stores information in a triplestore and retrieves it via a query language. Unlike a relational database, a triplestore is optimized for the storage and retrieval of triples. In addition to queries, triples can usually be imported/exported using Resource Description Framework (RDF) and other formats. Some triplestores can store billions of triples.[2] Implementation[edit] Some triplestores have been built as database engines from scratch, while others have been built on top of existing commercial relational database engines (i.e. List of implementations[edit] Technical overview[edit] The following table is an overview of available triplestores, their technical implementation, support for the SPARQL World Wide Web Consortium (W3C) recommendations, and available application programming interfaces (API). See also[edit] Freebase uses a triplestore called graphd[citation needed]Named graph a.k.a. References[edit] External links[edit]

Ontology (information science) In computer science and information science, an ontology formally represents knowledge as a hierarchy of concepts within a domain, using a shared vocabulary to denote the types, properties and interrelationships of those concepts.[1][2] Ontologies are the structural frameworks for organizing information and are used in artificial intelligence, the Semantic Web, systems engineering, software engineering, biomedical informatics, library science, enterprise bookmarking, and information architecture as a form of knowledge representation about the world or some part of it. The creation of domain ontologies is also fundamental to the definition and use of an enterprise architecture framework. The term ontology has its origin in philosophy and has been applied in many different ways. The word element onto- comes from the Greek ὤν, ὄντος, ("being", "that which is"), present participle of the verb εἰμί ("be"). According to Gruber (1993): Common components of ontologies include:

The Semantic Web: An Introduction This document is designed as being a simple but comprehensive introductory publication for anybody trying to get into the Semantic Web: from beginners through to long time hackers. Recommended pre-reading: the Semantic Web in Breadth. Table Of Contents What Is The Semantic Web? The Semantic Web is a mesh of information linked up in such a way as to be easily processable by machines, on a global scale. The Semantic Web was thought up by Tim Berners-Lee, inventor of the WWW, URIs, HTTP, and HTML. What's the rationale for such a system? So the Semantic Web can be seen as a huge engineering solution... but it is more than that. The Semantic Web is generally built on syntaxes which use URIs to represent data, usually in triples based structures: i.e. many triples of URI data that can be held in databases, or interchanged on the world Wide Web using a set of particular syntaxes developed especially for the task. URI - Uniform Resource Identifier RDF - Resource Description Framework Why RDF? Logic

RDF - Semantic Web Standards Overview RDF is a standard model for data interchange on the Web. RDF has features that facilitate data merging even if the underlying schemas differ, and it specifically supports the evolution of schemas over time without requiring all the data consumers to be changed. RDF extends the linking structure of the Web to use URIs to name the relationship between things as well as the two ends of the link (this is usually referred to as a “triple”). This linking structure forms a directed, labeled graph, where the edges represent the named link between two resources, represented by the graph nodes. Recommended Reading The RDF 1.1 specification consists of a suite of W3C Recommendations and Working Group Notes, published in 2014. A number of textbooks have been published on RDF and on Semantic Web in general. Discussions on a possible next version of RDF W3C has recently set up a new RDF Working Group, whose charter is to make a minor revision of RDF. Last modified and/or added All relevant tools

URL vs. URI vs. URN: The Confusion Continues A year has passsed since my last post on URIs and URLs andÂ it would seem that some of the concepts are still lost on some folks. With that said, I figured I’d throw up another post that I could try and address some of the questions raised in the comments of both posts. URLs and URNs are both URIs This is one point that can’t be stated enough. A URL is a URI and a URN is a URI, plain and simple. It’s really quite challenging to phrase it any other way. Examples of URLs and URNs: People have also suggested that these posts could have been more helpful if I had provided some examples that illustrate the difference between a URL and a URI. Again, all of the examples above are all valid examples of URIs. There’s a very informative page by Tim Berners-Lee that provides a lot of good deails on Uniform Resource Identifiers. “The only thing you can use an identifier for is to refer to an object. When you followed the link to this page, you didn’t have to do anything other than clicking it. No.