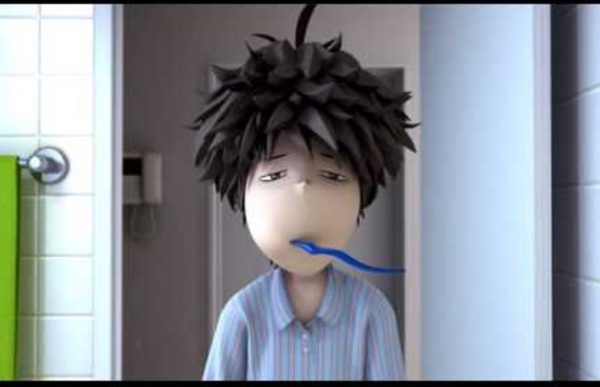 The Story Behind Girl Rising, the Most Powerful Film You'll See This Year Girl Rising is a revolutionary film that follows the life stories of nine girls from the developing world, who struggle every day for freedom, education and a voice in their home countries of Cambodia, Haiti, Nepal, Ethiopia, India, Peru, Sierra Leone and Afghanistan. I sat down with the film’s Academy Award-nominated Director Richard Robbins to discuss this incredible project. Where did the idea for this film come from? Why girls’ education? The original idea was mine. Pacific Light: Macro Footage of Ink, Oil and Soap Shot by Ruslan Khasanov Russian graphic designer Ruslan Khasanov who is probably best known for his experiments in liquid typography just released this experimental video where he plays with the interaction between ink, oil, and soap. Khasanov says he became inspired while cooking with a mixture of oil and soy sauce when he noticed the small black beads begin to form at the bottom of a container. He then began playing with a mixture of ink and soap to create this amazing mix of blue, white, yellow, and magenta. See everything in motion in the video above, and you can see some larger stills over on Behance.

Caldera por @ orchidanimation A young girl abandons her medication and the bleak city in which she lives, to explore a mystical oceanic cove. Premiering at SXSW in 2012, Evan Viera’s dark animation Caldera is the tale of young girl who finds her life in a precarious position after taking measures into her own hands. Realizing she can not live in either the fantastical and haunting world of psychosis or in the marginalizing society that mandates her medication, Caldera takes its protagonist on a journey into a dreamlike world as she attempts to deal with her psychotic disorder. Inspired by his father’s struggle with schizoaffective disorder, in which his delusional episodes saw him dance on the rings of Saturn, speak with angels, and flee from demons, Viera’s deeply personal film attempts to explore the battles faced by those striving to live with their afflictions, as they try to find their place in society and deal with the effects of medication.

Film Study Worksheet for a Documentary TWM's movie worksheets for documentaries are available through the following links: Film Study Worksheet for a Documentary and Film Study Worksheet for a Documentary that Seeks to Persuade on Issues of Political or Social Significance. The Balanced Rock Sculptures of Michael Grab Rely Solely on Gravity Land artist Michael Grab creates astonishing towers and orbs of balanced rocks using little more than patience and an astonishing sense of balance. Grab says the art of stone balancing has been practiced by various cultures around the world for centuries and that he personally finds the process of balancing to be therapeutic and meditative. Over the past few years of practicing rock balance, simple curiosity has evolved into therapeutic ritual, ultimately nurturing meditative presence, mental well-being, and artistry of design. Alongside the art, setting rocks into balance has also become a way of showing appreciation, offering thanksgiving, and inducing meditation.

Myths from Around the World Rome Aeneas tightly clasped a golden tree bough in his hand. It would give him safe passage on his terrible journey — to the underworld to seek out his father, Anchises. The Trojan hero followed his guide, the wise woman, the Sibyl of Cumae, deep into the dark forbidding cave that led to the land of the dead. They traveled the road of lost spirits, shadows adrift, and frightening horrors of disease, death, and discord until they reached two rivers. Not Your Average Drawing of a Rock: Colorful Riverbeds Drawn with Pencil by Ester Roi California artist Ester Roi (website currently down) works colored pencils to create drawings of imagined riverbeds that exhibit a superb understanding of the interaction between light, color and water. Roi uses a special drawing device called the Icarus Drawing Board that allows her to effectively create warm and cool “zones” underneath a wax-based medium. According to her website “the warm zone is used for mixing pigments, blending, burnishing and reworking. The cool zone is used for line drawing, layering, detailing and finishing touches.” The careful layering of pencil and wax apparently allows for some pretty brilliant color work.

Suspension of Disbelief In the world of fiction you are often required to believe a premise which you would never accept in the real world. Especially in genres such as fantasy and science fiction, things happen in the story which you would not believe if they were presented in a newspaper as fact. Even in more real-world genres such as action movies, the action routinely goes beyond the boundaries of what you think could really happen.

Credit Card Processing Use the secrets that credit card processors don't want you to know to drastically lower your credit card processing fees Contents Preface Share the Wealth! Help a friend or colleague lower his or her processing fees by sharing this guide with as many people as possible. fiction - What breaks suspension of disbelief? - Writers Beta - Stack Exchange There are two failures of storytelling that can cause me to lose my suspension of disbelief: Violating Established Rules In Act I through the first half of Act II, the story should establish the rules by which this fantasy or scifi world operates. This is usually told from the perspective of the protagonist, who is thrown into this new reality along with the audience.

How to Become an Early Riser It is well to be up before daybreak, for such habits contribute to health, wealth, and wisdom. – Aristotle Are morning people born or made? In my case it was definitely made. Self-Discipline This week I’ll be blogging a series on self-discipline. New posts on this topic will appear every day Mon-Fri. I’ve also added a new self-discipline category.