The smartest cities rely on citizen cunning and unglamorous technology. We are lucky enough to live at a time in which a furious wave of innovation is breaking across the cities of the global south, spurred on both by the blistering pace of urbanisation, and by the rising popular demand for access to high-quality infrastructure that follows in its wake. 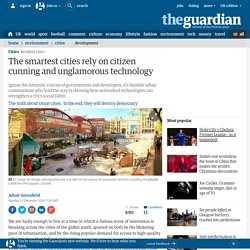 From Porto Alegre’s participatory budgeting and the literally destratifying cable cars of Caracas, to Nairobi’s “digital matatus” and the repurposed bus-ferries of Manila, the communities of the south are responsible for an ever-lengthening parade of social and technical innovations that rival anything the developed world has to offer for ingenuity and practical utility. Nor is India an exception to this tendency. The truth about smart cities: ‘In the end, they will destroy democracy' A woman drives to the outskirts of the city and steps directly on to a train; her electric car then drives itself off to park and recharge. 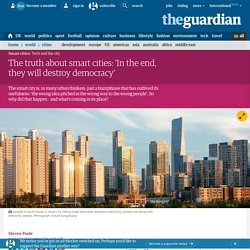 A man has a heart attack in the street; the emergency services send a drone equipped with a defibrillator to arrive crucial minutes before an ambulance can. A family of flying maintenance robots lives atop an apartment block – able to autonomously repair cracks or leaks and clear leaves from the gutters. Such utopian, urban visions help drive the “smart city” rhetoric that has, for the past decade or so, been promulgated most energetically by big technology, engineering and consulting companies. Yet there are dystopian critiques, too, of what this smart city vision might mean for the ordinary citizen.

The Bespoke Smart City. A Review of Adam Greenfield's Against the Smart City. Pictured above: A rendering of Masdar City, a "smart city" in the United Arab Emirates. 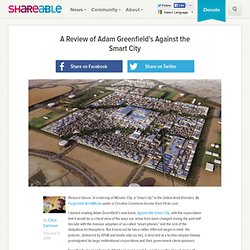 By Forgemind ArchiMedia under a Creative Commons license from Flickr.com. I started reading Adam Greenfield’s new book, Against the Smart City, with the expectation that it would be a critical view of the ways our urban lives have changed during the past half decade with the massive adoption of so-called “smart phones” and the rest of the ubiquitous technosphere. But it turns out he has a rather different target in mind. His polemic, delivered by EPUB and kindle only (so far), is directed at a techno-utopian fantasy promulgated by large multinational corporations and their government client-sponsors. Specifically, he spends most of his book going point-by-point over the absurd claims of efforts to build cities in “empty” spaces; that is, brand new urban complexes built from scratch in reclaimed mudflats in the sea, or in one case in an “undeveloped” rural valley in Portugal. Well? We’re listening to Adam Greenfield speak AGAINST THE SMART CITY.

City Cynic: 'Against The Smart City' By Adam Greenfield (Review) The Automation of Rio: Smart City or Digital Tyranny? What's the Big Idea? 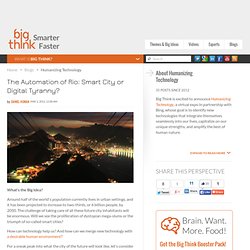 Around half of the world's population currently lives in urban settings, and it has been projected to increase to two-thirds, or 6 billion people, by 2050. IBM Smarter Cities « Utopia or Dystopia. It might not make a great b-movie from the late 50’s, but the rise of the algorithms over the last decade has been just as thrilling, spectacular, and yes, sometimes even scary. 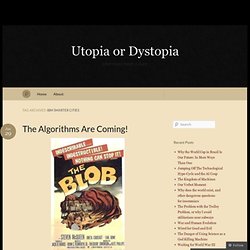 I was first turned on to the rise of algorithms by the founder of the gaming company Area/Code , Ken Slavin, and his fascinating 2011 talk on the subject at TED. I was quickly draw to one Slavin’s illustration of the new power of algorithms in the world of finance. Algorithms now control more than 70% of US financial transactions meaning that the majority of decisions regarding the buying and selling of assets are now done by machines. City of the Sun « Utopia or Dystopia. Too-smart cities? Why these visions of utopia need an urgent reality check. The needs of business, not people? 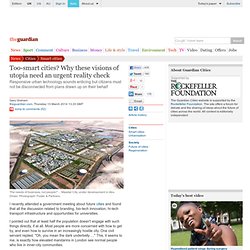 ... Masdar City, under development in Abu Dhabi. Photograph: Foster & Partners I recently attended a government meeting about future cities and found that all the discussion related to branding, bio-tech innovation, hi-tech transport infrastructure and opportunities for universities. I pointed out that at least half the population doesn't engage with such things directly, if at all. Over the past decade we've watched young people become increasingly immersed in social media. There are a number of different future-city visions being developed around the world at the moment.

The trouble is, large companies such as IBM, Samsung, Cisco and Intel are involved, and have much to gain from the development of future cities. Is anyone asking people what they want from the smart cities of the future? Future cities, where infrastructure adapts to our needs, offer are an enticing prospect. 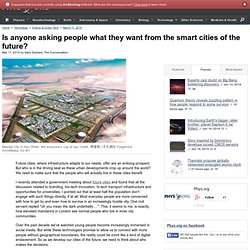 But who is in the driving seat as these urban developments crop up around the world? We need to make sure that the people who will actually live in these cities benefit. I recently attended a government meeting about future cities and found that all the discussion related to branding, bio-tech innovation, hi-tech transport infrastructure and opportunities for universities. I pointed out that at least half the population don't engage with such things directly, if at all. Most everyday people are more concerned with how to get by and even how to survive in an increasingly hostile city.