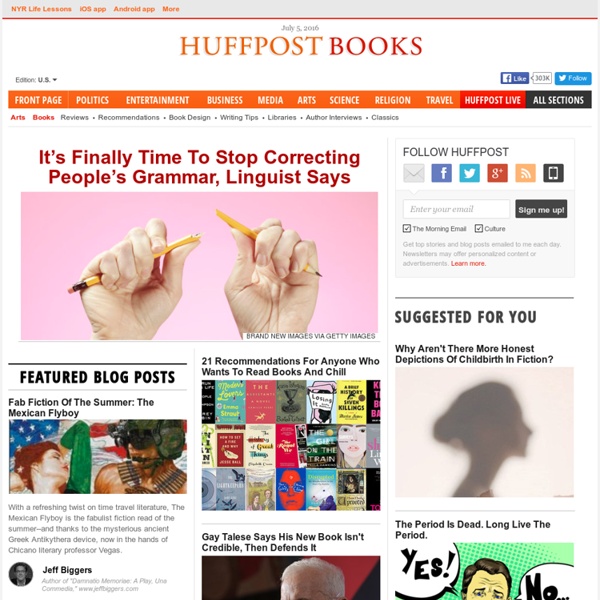 Parable of the Sower In case you've ever looked at the whitewashed array of dystopian and post-apocalyptic books that line the shelves and asked yourself, "Do people of color survive the apocalypse?" the answer is yes. Read these books. Water is one of the most organic and natural substances on the planet and is essential to good health, yet rarely do we think about how it can cleanse, heal, and transform our lives. Red Room

The 25 Best Websites for Literature Lovers It’s an interesting relationship that book lovers have with the Internet: most would rather read a physical book than something on an iPad or Kindle, and even though an Amazon purchase is just two or three clicks away, dedicated readers would rather take a trip to their local indie bookstore. Yet the literary world occupies a decent-sized space on the web. Readers, writers, publishers, editors, and everybody in between are tweeting, Tumbling, blogging, and probably even Vine-ing about their favorite books. In case the demise of Google Reader threw your literary Internet browsing into a dark void, here’s a list of 25 book sites to bookmark. The Millions Strange Horizons, a weekly speculative fiction magazine 14 April 2014 (Reviews) FICTION: The Final Girl, by Shira Lipkin There is still no book on the particular trauma of Final Girls. FICTION: Podcast: The Final Girl, by Shira Lipkin, read by Anaea Lay In this episode of the Strange Horizons podcast, editor Anaea Lay presents Shira Lipkin's "The Final Girl."

EBSCOhost Latest News & Events Latest Articles Technology & Services Discovery & Services The latest in books and fiction Our privacy promise The New Yorker's Strongbox is designed to let you communicate with our writers and editors with greater anonymity and security than afforded by conventional e-mail. When you visit or use our public Strongbox server at The New Yorker and our parent company, Condé Nast, will not record your I.P. address or information about your browser, computer, or operating system, nor will we embed third-party content or deliver cookies to your browser.

Books - ArtsBeat Blog The Audiobook of the Year is not a book. The Audio Publishers Association announced the winners of its 2015 Audie awards at a gala in New York City on Thursday evening. The top award went to “Mandela: An Audio History,” a gripping documentary with first-person interviews and archival recordings. It was produced by Radio Diaries and published by Highbridge, a division of Recorded Books. Books - ArtsBeat Blog - The New York Times Photo A rambling 1950 letter from Neal Cassady to Jack Kerouac that helped inspire “On the Road” will be auctioned next month by Christie’s in New York, apparently bringing to an end an 18-month legal battle over its ownership. The 16,000-word typed letter, which carries an estimate of $400,000 to $600,000, had been considered lost before it surfaced in the discarded files of Golden Goose Press, a now-defunct small San Francisco publisher, and listed for sale by a Southern California auction house in 2014.

The List List #112 Our weekly round-up of the best bookish lists floating around the internet. This installment of The List List is sponsored by Random House Audio. Visit TryAudiobooks.com to get recommendations and download a free audiobook. at Flavorwire, 5 of the Best Literary Frenemy Pairings A Zen Librarian: Bluestem and Monarch Shelf Talkers Over the summer, I saw an image, I think it was Jon Schu's library blog, that had what I call "shelf talkers." Basically they are little cards that are taped to the bookcase where the books are housed. The cards have a picture of the book, a synopsis of the story and a note about the contest the book is a part of. I created Bluestem and Monarch shelf talkers. I hope others might find them as helpful.