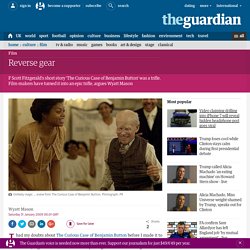 F Scott Fitzgerald's 1921 story on which the film is loosely based is a trite, slight collision of feckless storytelling and careless writing. Fitzgerald, a writer properly remembered for the fineness of his prose, seems not to have made it all the way into work on the day he wrote this little yarn. Rather, "The Curious Case of Benjamin Button" seems to have come from his accounting department, the part of his brain that willfully generated stories to sell to magazines for the money he perpetually lacked. Reading "The Curious Case" now is to watch a writer of famously unhurried prose in a great rush. Like a man scattering birdseed in a park, Fitzgerald distributes adverbs with mindless strokes. Such overkill is at least in keeping with a story otherwise overcooked.

Not that there's anything fundamentally unworkable about such a concept. Definition and Examples of Literary Terms. Film Education. Code. Download or Read Online - Free Books from Classicly. Approaches to process writing. What is process writing? 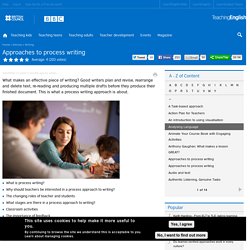 Why should teachers be interested in a process approach to writing? Alice In Wonderland Is A Mixture Of Reality And Fantasy: Not A Fairy-Tale. Part 2. 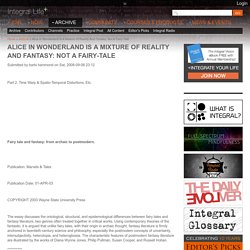 Time Warp & Spatio-Temporal Distortions, Etc. Fairy tale and fantasy: from archaic to postmodern. Publication: Marvels & Tales Publication Date: 01-APR-03 COPYRIGHT 2003 Wayne State University Press The essay discusses the ontological, structural, and epistemological differences between fairy tales and fantasy literature, two genres often treated together in critical works. The Lesser of Two Equals. As I assume I’ve made apparent in this series of articles, there are a lot of problems inherent in adapting a book to film. 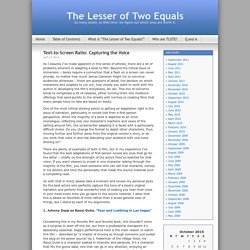 Beyond the critical issue of immersion – books require a connection that a flash on a screen can never provide, no matter how much James Cameron might try to convince audiences otherwise – there are questions of detail, the decision on which characters and subplots to cut out, how closely you want to work with the author in developing the film’s storyboard, etc etc. This mix of concerns tends to complicate a lot of releases, either turning them into mediocre offerings that send purists to the streets with torches or creating films that many people have no idea are based on books. One of the most critical sticking points to getting an adaptation right is the issue of narration, particularly in novels told from a first-person perspective.

Off-screen, Depp’s performance earns bonus points for the level of immersion he took into preparing for the role. 2. Some Terms in McFarlane » Film Adaptation. Narrative vs. 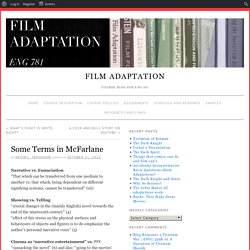 Enunciation “That which can be transferred from one medium to another vs. that which, being dependent on different signifying systems, cannot be transferred” (vii) Showing vs. Telling “crucial changes in the (mainly English) novel towards the end of the nineteenth century” (4) “effect of this stress on the physical surfaces and behaviours of objects and figures is to de-emphasize the author’s personal narrative voice” (5) Cinema as “narrative entertainment” vs. ???

“ransacking the novel” (6) and also “‘going to the movies’ is going to see this type of story” (12) Fidelity vs. BARTHES ON NARRATIVE FUNCTIONS:Distributional vs. Distributional functions subdivided further into “cardinal functions” (hinge points, nuclei, kernels) vs. ON KINDS OF NARRATION:1st Person vs. Sequential vs. Suspension of Disbelief. In the world of fiction you are often required to believe a premise which you would never accept in the real world. 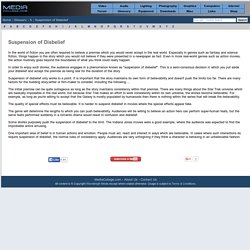 Especially in genres such as fantasy and science fiction, things happen in the story which you would not believe if they were presented in a newspaper as fact. Even in more real-world genres such as action movies, the action routinely goes beyond the boundaries of what you think could really happen. Subjective Cinema - Film Theory. Introduction The general meaning of ‘Subjective’ is to express the personal taste or opinion. 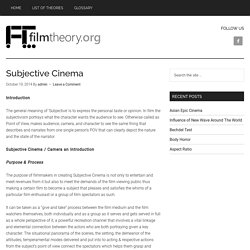 In film the subjectivism portrays what the character wants the audience to see. Otherwise called as Point of View, makes audience, camera, and character to see the same thing that describes and narrates from one single person’s POV that can clearly depict the nature and the state of the narrator. Subjective Cinema / Camera an Introduction. Children's Literature - Chi-Fen Chen. Fantasy. Modern Fantasy. Some Terms in McFarlane » Film Adaptation. Icosilune » Brian McFarlane: Novel to Film. Brian McFarlane's Novel To Film. “My task which I am trying to achieve is, by the powers of the written word, to make you hear, to make you feel—it is, before all, to make to see” —Joseph Conrad (author) “The task I am trying to achieve is above all to make you see”—D.W. 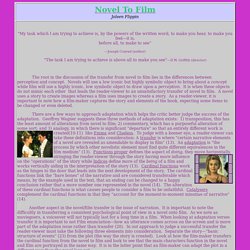 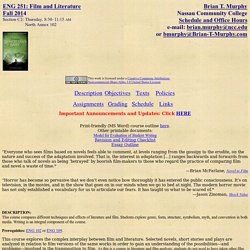 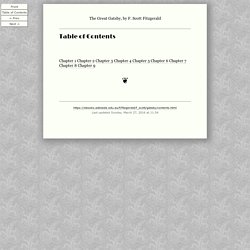 It can’t seem decide if it wants to be a tragedy or a farce. Taken as an adaptation of F. Scott Fitzgerald’s celebrated short story “Babylon Revisited,” it’s even stranger. I’d like to argue that the word adaptation doesn’t apply to what this movie does to this story. Rather, it’s an extended dream sequence that uses Fitzgerald’s basic plot as a jumping-off point, along the way losing the pathos and the elegance of the original text. Lecture 12 - Fitzgerald's Short Stories. How to Write an Essay About a Novel.