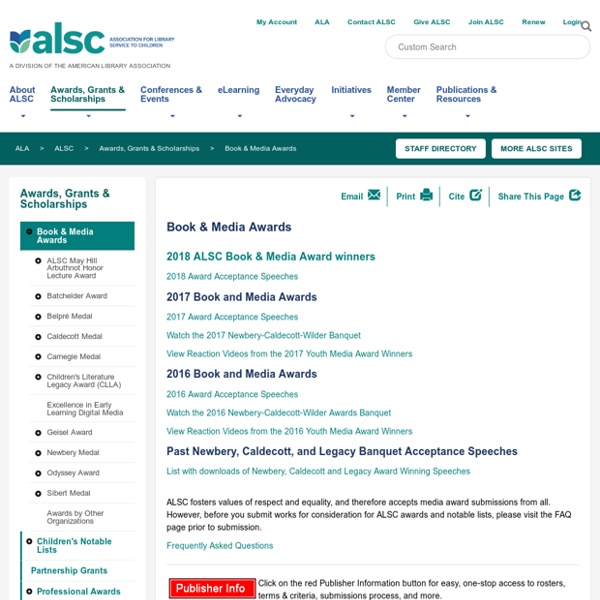 ALA - Book, Print & Media Awards Skip to main content ALA User Menu ala homepage quick links You are at: ALA.org » AWARDSGRANTS » Book, Print & Media Awards Share this page: ALA - Youth Media Awards The 2017 Youth Media Awards were announced on Monday, Jan. 23, 2017 at 8 a.m. ET from the ALA Midwinter Meeting & Exhibits in Atlanta. Read the press release: American Library Association announces 2017 youth media award winners Booklist Online - Book and Media Awards Book Awards and Media Awards The American Library Association, of which Booklist Online is a part, juries some of the most highly regarded book and media awards and honors in the world. Follow the links below to see the most current winners; individual books and media are linked to the Booklist reviews when available. Booklist Online subscribers can view archived awards to 1992 and can also limit advanced searches by award winners.

PEN / Faulkner - Past Winners & Finalists Below are the past winners and finalists of the PEN/Faulkner Award for Fiction from 1981 through the present. A PDF of this listing is also available here. 2016 – James Hannaham, Delicious Foods Julie Iromuanya, Mr. and Mrs.