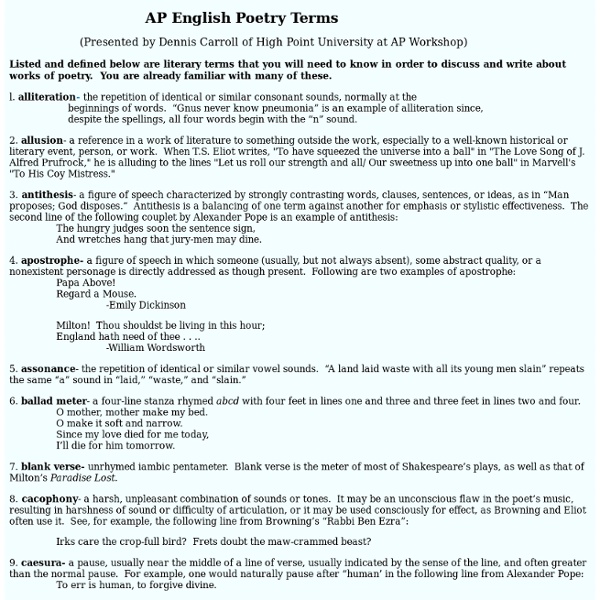 AP English Poetry Terms (Presented by Dennis Carroll of High Point University at AP Workshop) Listed and defined below are literary terms that you will need to know in order to discuss and write about works of poetry. You are already familiar with many of these. l. alliteration- the repetition of identical or similar consonant sounds, normally at the beginnings of words. “Gnus never know pneumonia” is an example of alliteration since, despite the spellings, all four words begin with the “n” sound. 2. allusion- a reference in a work of literature to something outside the work, especially to a well-known historical or literary event, person, or work. 3. antithesis- a figure of speech characterized by strongly contrasting words, clauses, sentences, or ideas, as in “Man proposes; God disposes.” 4. apostrophe- a figure of speech in which someone (usually, but not always absent), some abstract quality, or a nonexistent personage is directly addressed as though present. Milton!

Famous Novelists on Symbolism in Their Work and Whether It Was Intentional Eric Carle's bright, beloved children's classic about an insatiable caterpillar has been collecting awards—and fans—since it was first published in 1969. Here are a few things you might not know about The Very Hungry Caterpillar. 1. The Very Hungry Caterpillar's bright colors contrast a dark period in Eric Carle's childhood. Eric Carle was born in Syracuse, New York, on June 25, 1929.

Teaching Sonnets Unit Plan Many educators have found that the sonnets are a wonderful way to introduce Shakespeare to students because the smaller blocks of language are less intimidating than whole plays. Louisa Newlin, who leads workshops on sonnets for teachers, and Gigi Bradford, who teaches Shakespeare’s Sisters, a seminar for high school students at the Folger, have created a series of lesson plans about the sonnets that concentrate on the Bard but also include sonnets from before Shakespeare as well as contemporary sonnets. This arc of study provides a context for Shakespeare’s genius, introduces the sonnet’s form and structure, includes language easier to understand than Shakespeare’s, and illustrates his continuing influence.

Metaphors Are Us - Issue 1: What Makes You So Special The other day I fixed something—a rarity for me. The flotation device in the toilet water tank was rubbing against the side, getting stuck halfway up so that the tank didn’t fill completely. I own a hammer and know how to operate it. But I couldn’t fit it into the tank to whack the device back into place. Ditto for owning and using a wrench. It wouldn’t fit either. Glossary of Poetic Terms Where a poem makes reference to another poem or text. For example, the 14th line of The Prelude by William Wordsworth 'The earth was all before me' alludes to one of the final lines of Paradise Lost by John Milton 'The world was all before them'. Paradise Lost, in turn, alludes to the story of Adam and Eve in Genesis. A poem containing multiple allusions is The Waste Land by T.S.Eliot which makes reference to lines written by Shakespeare, Milton, Spenser, Verlaine, Baudelaire, Marvell, Dante, Webster, St.

virtuaLit Fiction: Elements of Fiction The Hare and the Tortoise One day the speedy hare was bragging among his fellow animals. “I have never been beaten in a race,” he said. The Sonnets You can buy the Arden text of these sonnets from the Amazon.com online bookstore: Shakespeare's Sonnets (Arden Shakespeare: Third Series) I. FROM fairest creatures we desire increase,II. When forty winters shall beseige thy brow,III. Look in thy glass, and tell the face thou viewestIV. Unthrifty loveliness, why dost thou spendV. Story within a story Types of nested story[edit] Story within a story[edit] The inner stories are told either simply to entertain or more usually to act as an example to the other characters. In either case the story often has symbolic and psychological significance for the characters in the outer story. There is often some parallel between the two stories, and the fiction of the inner story is used to reveal the truth in the outer story. The literary device of stories within a story dates back to a device known as a frame story, when the outer story does not have much matter, and most of the bulk of the work consists of one or more complete stories told by one or more storytellers.

Poetry 180: A Poem a Day for American High Schools (Poetry and Literature Center, Library of Congress) Welcome to Poetry 180. Poetry can and should be an important part of our daily lives. Poems can inspire and make us think about what it means to be a member of the human race. By just spending a few minutes reading a poem each day, new worlds can be revealed. Poetry 180 is designed to make it easy for students to hear or read a poem on each of the 180 days of the school year. I have selected the poems you will find here with high school students in mind.

Plot, Theme, the Narrative Arc, and Narrative Patterns In the world of fiction, just as in the world of your life, events occur. In life, people often try to determine what events mean in their own life and in the life of others. In fiction, authors will create meaning by introducing conflicts in the life of a character. The way a character responds to these conflicts is part of what gives a story meaning. Chekhov's gun Chekhov's gun is a dramatic principle requiring that every element in a narrative be necessary and irreplaceable, and that everything else be removed.[1][2][3] Remove everything that has no relevance to the story. If you say in the first chapter that there is a rifle hanging on the wall, in the second or third chapter it absolutely must go off. If it's not going to be fired, it shouldn't be hanging there.