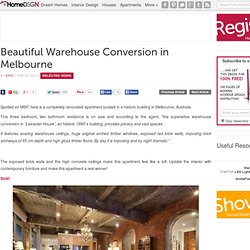 This three bedroom, two bathroom residence is on sale and according to the agent, “this superlative warehouse conversion in “Leicester House”, an historic 1880′s building, provides privacy and vast spaces. It features soaring warehouse ceilings, huge original arched timber windows, exposed red brick walls, imposing brick archways of 65 cm depth and high gloss timber floors. By day it is imposing and by night dramatic.” The exposed brick walls and the high concrete ceilings make this apartment feel like a loft. Sold! Photos courtesy of MDP Click any photo to see a larger image - Use buttons or j/k/arrow keys to navigate through the articles. Inner Child: Colorful Home has Trap Doors & Secret Slides.

If kids could design and build whole homes, what would they look like? 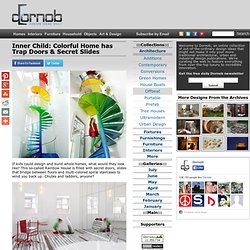 This so-called Rainbow House is filled with secret doors, slides that bridge between floors and multi-colored spiral staircases to wind you back up. Chutes and ladders, anyone? Dubbed a “magical oasis’ by its creators (AB Rogers and DA Studio, the busy and noisy road next to the building is matched by equally rambunctious and interactive interior decor. Dilapidated 18th Century Church Transformed Into a Private Home. Adaptive reuse projects generally call to mind industrial warehouses and factories turned into trendy studios, or shabby-chic restaurants and bars, but the transformation of the St. 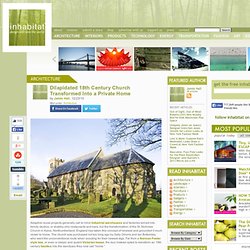 Nicholas Church in Kyloe, Northumberland, England has taken this concept of renewal and grounded it much closer to home. The church was purchased not too long ago by Sally Onions and Ian Bottomley, who went the unconventional route when scouting for their newest digs. Far from a Norman Foster style box, or even a classic and quaint Victorian house, the duo instead opted to transform an 18th century basilica into the sanctuary they now call “home.” The church was originally built in 1792, so the couple wanted to maintain as much of the building’s classic architecture as possible. 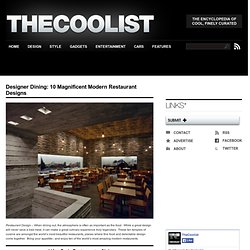 While a great design will never save a bad meal, it can make a great culinary experience truly legendary. These ten temples of cuisine are amongst the world’s most beautiful restaurants, places where fine food and delectable design come together. Bring your appetite– and enjoy ten of the world’s most amazing modern restaurants. L’Arc Paris Restaurant + Club L’Arc Paris Restaurant is quite aptly named– right across from those large windows is the famed Arc de Triomphe, one of Paris’ most popular landmarks. L’Arc Paris Restaurant Gallery. MOUNTAIN VILLAGE by ~truegarden on deviantART. Incredible Residence in Brazil Housing a Giant Book Wall. We have great respect for homes with books. 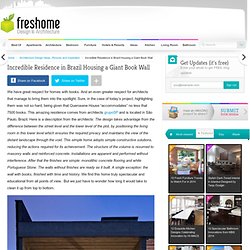 And an even greater respect for architects that manage to bring them into the spotlight. Sure, in the case of today’s project, highlighting them was not so hard, being given that Querosene House “accommodates” no less that 7500 books. This amazing residence comes from architects grupoSP and is located in São Paulo, Brazil. Here is a description from the architects: The design takes advantage from the difference between the street level and the lower level of the plot, by positioning the living room in this lower level which ensures the required privacy and maintains the view of the distant landscape through the void.

This simple home adopts simple constructive solutions, reducing the actions required for its achievement. Gorgeous Hawaii Villa with Fantastic Oceanviews for Sale. This next beautiful estate is located on the Island of Maui, Hawaii, between Kaanapali and Kapalua. 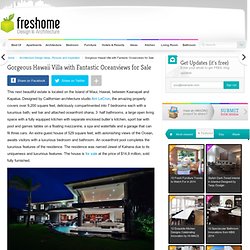 Designed by Californian architecture studio Arri LeCron, the amazing property covers over 9,200 square feet, deliciously compartmented into 7 bedrooms each with a luxurious bath, wet bar and attached oceanfront ohana, 3 half bathrooms, a large open living space with a fully equipped kitchen with separate enclosed butler’s kitchen, sport bar with pool and games tables on a floating mezzanine, a spa and waterfalls and a garage that can fit three cars. An extra guest house of 529 square feet, with astonishing views of the Ocean, awaits visitors with a luxurious bedroom and bathroom. An oceanfront pool completes the luxurious features of the residence. The residence was named Jewel of Kahana due to its uniqueness and luxurious features. The house is for sale at the price of $14,9 million, sold fully furnished. Exotic Residence in Singapore : The Fish House. Share on Facebook Tweet The Fish House is an exotic residence designed by Guz Architects and located in Singapore. 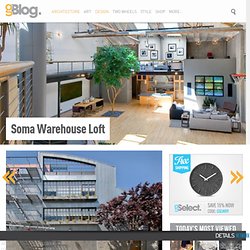 The residence takes up 5,000 sqf and creates a spacious enviornment with its multiple levels. The property was transformed from a warehouse structure by its original owner with conjunction of the Martin Building Company. It’s radiant heated hardwood floors were saved from a Los Angeles airplane hanger. The house obtained its unique gandeur as it paid devotion to the original hangar with nearly 30 foot exposed timber and white-washed ceilings. 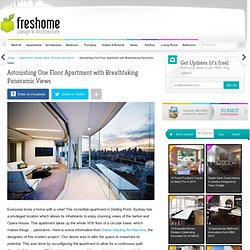 This incredible apartment in Darling Point, Sydney has a privileged location which allows its inhabitants to enjoy stunning views of the harbor and Opera House. This apartment takes up the whole 16′th floor of a circular tower, which makes things… panoramic. Office Design Excellence: 10 Amazing Office Designs Around the World. Best offices to work in. Ever thought how working for a really big company would be like ? 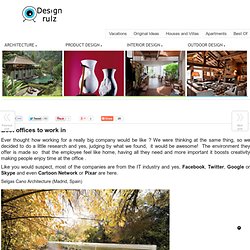 We were thinking at the same thing, so we decided to do a little research and yes, judging by what we found, it would be awesome! The environment they offer is made so that the employee feel like home, having all they need and more important it boosts creativity making people enjoy time at the office . Like you would suspect, most of the companies are from the IT industry and yes, Facebook, Twitter, Google or Skype and even Cartoon Network or Pixar are here. Selgas Cano Architecture (Madrid, Spain) Cartoon Network. Google’s Productivity Secret. Google Office in Mexico City by Juan Carlos Baumgartner. 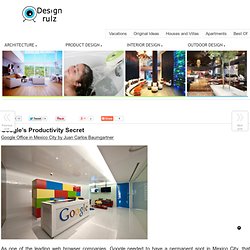 Bank of Moscow’s Offices. The interior design of Bank of Moscow’s offices in central Moscow’s Kuznetsky Most area (Kuznetsky Most street 13) retains the building’s great historical bones and matches customized adornments to them. The office — one of the Bank’s many offices — occupies 7,000 square metres on the third floor and in the previously unused mansard (attic) space.

Moscow-based designer, Alexey Kuzmin , retained by architectural office Sretenka for this assignment, used the space’s key feature, the large, hexagon-shaped central hall, as the defining point. A former Cement Factory is now the workspace and residence of Ricardo Bofill. Image Courtesy of Ricardo Bofill Architect: Ricardo BofillProgram: Architectural offices /archives /model laboratory /exhibition space /Bofill's-apartment /guest rooms /gardensLocation: Barcelona, SpainTotal floor area: 3,100 square meters and gardensHouse area: 500 square metersDate Completed: 1975 There is nothing as good as an aged bottle of wine; and in this case the aged bottle of wine is a project which was completed in 1975, but is still worth mentioning! A Showcase of Workstations that’ll Make You Jealous.