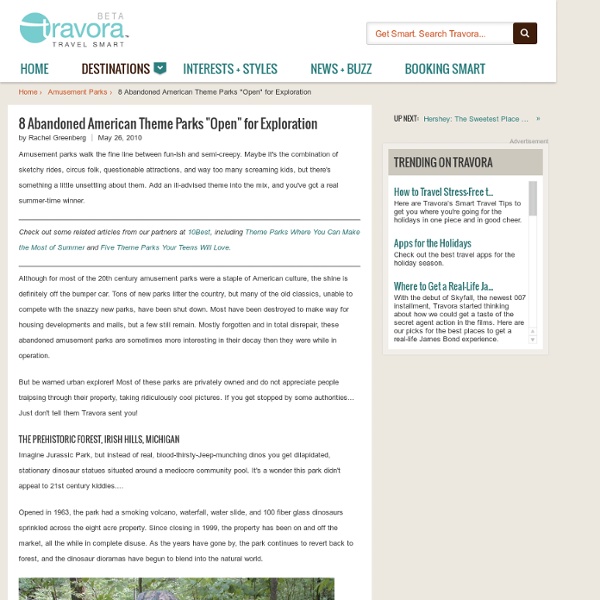 Amusement parks walk the fine line between fun-ish and semi-creepy. Maybe it’s the combination of sketchy rides, circus folk, questionable attractions, and way too many screaming kids, but there’s something a little unsettling about them. Add an ill-advised theme into the mix, and you’ve got a real summer-time winner. Although for most of the 20th century amusement parks were a staple of American culture, the shine is definitely off the bumper car. But be warned urban explorer! The Prehistoric Forest, Irish Hills, Michigan Imagine Jurassic Park, but instead of real, blood-thirsty-Jeep-munching dinos you get dilapidated, stationary dinosaur statues situated around a mediocre community pool. Opened in 1963, the park had a smoking volcano, waterfall, water slide, and 100 fiber glass dinosaurs sprinkled across the eight acre property. [All Dinosaur Images: RoadsideArchitecture via Debra Jane Seltzer] [youtube] Six Flags, New Orleans Image: Liquorhead /Flickr Related:  Show Emma

I think we all need something like this. Do you agree? Science Toys From the Archive: Wack Attack | Bitch Magazine Giving the Digital Finger to Blog Bandits We were under attack. It was late on an August night. I was trying not to come down with a cold and just about to go to bed. But I was also guest-blogging at Feministe that week, so I logged on to check my e-mail and moderate comments one last time before I turned in. I was already overwhelmed. Then I got word that a loosely organized cybermob known as Anonymous was attempting to crash feminist sites, including Feministe, flooding comments sections with misogynist rants and threatening feminist bloggers with rape and other violence. It turned out that we were wrong. A little background I lacked at the time: Anonymous was not formed to carry out an antifeminist agenda. When they turned their attention to feminist websites, their goal was not, in fact, to silence us. Even as the attacks were happening, there was much debate within the feminist blogosphere about how to respond to them. Heart, this is horrible. So what's a web-savvy woman to do? 1.

Derinkuyu, or: the allure of the underground city My friend Robert and I finished reading Alan Weisman's The World Without Us almost simultaneously – and we both noted one specific passage. Before we get to that, however, the premise of Weisman's book – though it does, more often than not, drift away from this otherwise fascinating central narrative – is: what would happen to the Earth if humans disappeared overnight? What would humans leave behind – and how long would those remnants last? [Images: Derinkuyu, the great underground city of Cappadocia; images culled from a Google Images search and from Wikipedia]. Manhattan will be gone, Los Angeles gone, Cape Canaveral flooded and covered with seaweed, London dissolving into post-Britannic muck, the Great Wall of China merely an undetectable line of minerals blowing across an abandoned landscape – but there, beneath the porous surface of Turkey, carved directly into tuff, there will still be underground cities. Some tunnels lead from building to building.

World's Most Extraordinary Swimming Pools Be it for location, design or size, these pools are more than just enclosed bodies of water intended for swimming - as put in a definition. These extraordinary pools give a whole new meaning to swimming. In some cases you would have to be super rich to dip yourself in the luxurious waters, but a few of them are set in amazing sceneries, open to the public, and quite inexpensive. 1. The Icebergs. Sydney. The ocean's waves often break over the side of the Icebergs swimming pool located in the corner of the famed Bondi Beach. 2. Unlike with Icebergs, you would have to be a millionaire to immerse yourself in the waters of the Neptune Pool. The Neptune pool. 3. This twisting swimming pool projects eight feet over the sidewalk, at the edge of the 10th floor of the Joule Hotel in Dallas. The Joule Hotel in Dallas. 4. The calm, emerald-green swimming pool is floating above the Ayung River valley in Bali's lush foothills. 5. 6. This is the world's largest swimming pool. San Alfonso del Mar. 7.

10 Amazing Tricks to Play with your Brain / Mind Mind is the aspect of intellect and consciousness experienced as combinations of thought, perception, memory, emotion, will and imagination, including all unconscious cognitive processes. Mind manifests itself subjectively as a stream of consciousness. Neuroanatomists usually consider the brain to be the pivotal unit of what we refer to as mind. The Human Brain tricks us whenever it can. 10. At first this might sound like a bad practical joke. 9. In case you experience an injury, then see the injured part with an inverted binoculars, soon your pain will seem to be decreasing in its magnitude. Recently, a reasearch at Oxford University has lead to the discovery of a new pain killer – the inverted binoculars. Source: ( Link) 8. This requires two chairs and a blind fold. The Pinocchio effect is an illusion that ones nose is growing longer, as happened to the literary character, Pinocchio when he told a lie. 7. Source: ( Link) 6. Pages: 1 2

The Art of Tattoo | At the intersection of art and tattoo