A Showcase of Workstations that’ll Make You Jealous 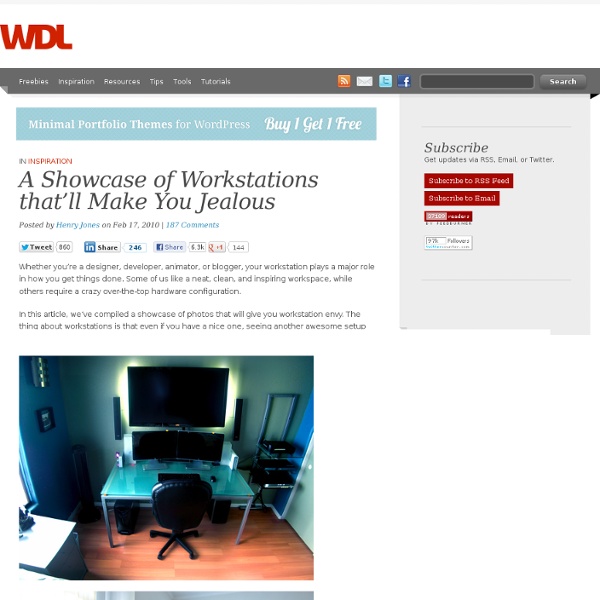 Whether you’re a designer, developer, animator, or blogger, your workstation plays a major role in how you get things done. Some of us like a neat, clean, and inspiring workspace, while others require a crazy over-the-top hardware configuration. In this article, we’ve compiled a showcase of photos that will give you workstation envy. The thing about workstations is that even if you have a nice one, seeing another awesome setup can make you a bit jealous. About the Author Henry Jones is a web developer, designer, and entrepreneur with over 14 years of experience. Related Posts 389 shares Colorful Logos for Your Inspiration We’ve rounded up some examples of logo designs that make excellent use of color. Read More 745 shares 11 Inspiring Examples of Dark Colors in Web Design Deciding when to go dark can be tricky, but the decision should always be about enhancing the content and the user experience.

Breakthrough Nanotechnology Will Bring 100 Terabyte 3.5-inch Digital Data Storage Disks Have you ever dream of 100 terabyte of data per 3.5-inch disk? New patented innovation nanotechnology from Michael E. Thomas, president of Colossal Storage Corporation, makes it real. Michael invented and patented the world's first and only concept for non-contact UV photon induced electric field poling of ferroelectric non-linear photonic bandgap crystals, which offers the possibility of controlling and manipulating light within a UV/Deep Blue frequency of 1 nm to 400 nm. Sony Nextep Computer Concept for 2020 by Hiromi Kiriki In 2020 We Can Wear Sony Computers On Our Wrist Our present need for internet connectivity is so profound that secondary devices like the Nextep Computer are bound to happen. Developed to be worn as a bracelet, this computer concept is constructed out of a flexible OLED touchscreen.

Packaging Awards 2011 Dieline World packaging design competition by The Dieline has completed with awesome results. USB Stick Contains Dual-Core Computer, Turns Any Screen Into an Android Station Is that a USB key in your pocket or a dual-core computer? Today, Norwegian company FXI technologies showed off a USB stick-sized portable computer prototype, complete with a dual-core 1.2-GHz Samsung Exynos ARM CPU (same as in the Galaxy S II), 802.11n Wi-Fi, Bluetooth, HDMI-out and a microSD card slot for memory. Codenamed Cotton Candy because its 21 gram weight is the same as a bag of the confection, the tiny PC enables what its inventor calls “Any Screen Computing,” the ability to turn any TV, laptop, phone, tablet, or set-top box into a dumb terminal for its Android operating system. The Cotton Candy has a USB 2.0 connector on one end and an HDMI jack on the other.

Achieving a Vintage Look Through Color Tones in Photoshop CS - StumbleUpon by Guest Contributor Anna Gay Photographers are often striving for a “vintage” look in their photos, and even though there are endless ways of achieving a vintage look, there are a couple of characteristics to keep in mind. First of all, the color tones in a vintage photo often lean towards either a blue or a red hue, or a cross-processed look. Vintage photos also have an element of noise or grain that can be achieved through textures, and also a certain amount of vignetting around the edges of the photo. In this tutorial, we will look at adjusting color tones and adding vignettes.

AR.Drone - How does it work? - AR.Drone specifications “Create high-quality and stable movie shots” The Director mode lets you program automaticmovements so that you can shoot great videos justlike a movie director. Choose your movement: traveling, pan, crane… Adjust speed and moves in real time to compose your video sequence Stabilization system and video post-processing to get clean smooth shots Tune camera settings such as white balance, exposure and luminosity Selection of key sequences in the video Video sharing on YouTube and AR.Drone Academy *In-app purchase on ar.freeflight Learn more Camera moves Big pile of homemade sackboys - Little BIG Planetoid - Always watching the LittleBigPlanet - Planet news, lbp costume dlc, community Jan 25th 2009 - 6:53 PM The other day we were asking if any of you had been inspired by LittleBigPlanet to get out the scissors and glue, and start creating things. The first email we received was from Paul, who dropped us a line to tell us about his big pile of homemade sackboys… 16 of them to be precise, check them out… Awesome huh?

DIY Wrap Bracelet You should all know by now that we are all about stacking bracelets on our wrists. The more, the better. In fact . . . the most, the best! With that being said, we’ll show you how to master a version of the ever so popular wrap bracelet. It’s so simple and addicting, you’ll soon be churning out these wristlets with your eyes closed. Clearly this arm party train isn’t stopping and it’s about time you get on board! Want Siri for Android? Try Vlingo [Infographic] While Siri isn’t perfect, the voice-controlled assistant is definitely an innovative feature of the iPhone 4S and it’s something that may make Android fans jealous. While we’ve seen some Siri competitors on Android before, we’ve been fans of Vlingo for a long time and the company just put out an infographic about why it offers more features than Siri. The funny thing is that both Siri and Vlingo are now connected through Nuance, as this company provides the voice-recognition technology for Apple’s iPhone 4S and it just acquired Vlingo. Still, the infographic is interesting to see and if you’re on an Android phone and want a taste of voice controls, feel free to download Vlingo here.

Wild Scenics Pictures - StumbleUpon [ View fewer images per page ] Click here to show (or hide) search and display options [ For a large image and details: click on photo to stay in current window, click on photo ID to open new window.] World's smallest battery will put power everywhere Researchers have built a battery that's six times thinner than a bacterium. The microscopic power pack could be used to run all sorts of minuscule electronic devices, including sensors that spy on single cells. Does this mean we'll start seeing commercials for the Energizer bacterium? At 150 nanometers wide, the nano battery is hundreds of times thinner than a human hair and more than 60,000 times smaller than a AAA battery. How many "A"s is that? The little battery, developed at Rice University, is actually a cross between a battery and a supercapacitor.