Hubble just discovered a moon hiding at the back of our Solar System. A few weeks ago, a huge galaxy orbiting our own appeared seemingly out of nowhere. 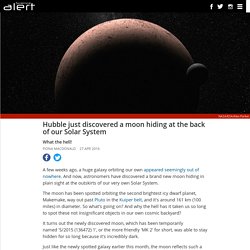 And now, astronomers have discovered a brand new moon hiding in plain sight at the outskirts of our very own Solar System. The moon has been spotted orbiting the second brightest icy dwarf planet, Makemake, way out past Pluto in the Kuiper belt, and it's around 161 km (100 miles) in diameter. So what's going on? And why the hell has it taken us so long to spot these not insignificant objects in our own cosmic backyard? It turns out the newly discovered moon, which has been temporarily named 'S/2015 (136472) 1', or the more friendly 'MK 2' for short, was able to stay hidden for so long because it's incredibly dark. Just like the newly spotted galaxy earlier this month, the moon reflects such a tiny, tiny amount of light that we've struggled to see it next to the glare of Makemake. "I was sure someone had seen it already," Parker told National Geographic.

NASA/ESA/Alex Parker. When Light Just Isn’t Fast Enough. Take a speed of light trip across the solar system starting at the Sun We’ve heard it over and over. 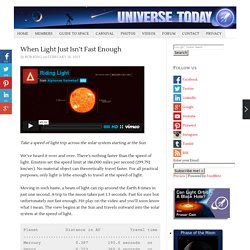 There’s nothing faster than the speed of light. Einstein set the speed limit at 186,000 miles per second (299,792 km/sec). No material object can theoretically travel faster. For all practical purposes, only light is lithe enough to travel at the speed of light. Moving in such haste, a beam of light can zip around the Earth 8 times in just one second. Planet Distance in AU Travel time .................................................................... Distances and light times to the planets and Pluto (from Alphonse Swinehart) You might first think that moving that fast will get us across the orbits of the eight planets in a hurry. As the video tediously but effectively demonstrates we live in a solar system where a few planets are separated by vast spaces. A pile of Skittles candy seen at rest. Let’s explore further. Wave-particle duality of light Let say you’re in a plane. About Bob King. Astronomy Picture of the Day Archive. 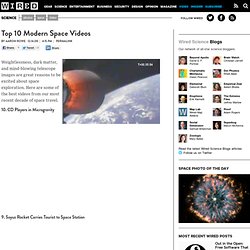 Here are some of the best videos from our most recent decade of space travel. 10. CD Players in Microgravity 9. 8. 7. 3-D Map of Dark Matter 6. Science. Brainz — Learn something new today. Ciencia Kanija. Astronomers aim to 'capture' a black hole. French astronomer Pierre-Simon Laplace predicted the existence of black holes way back in 1796, but we’ve yet to capture one on camera. 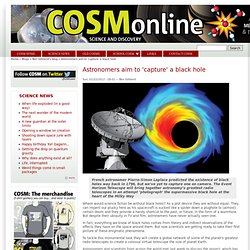 The Event Horizon Telescope will bring together astronomy’s greatest radio telescopes in an attempt ‘photograph’ the supermassive black hole at the heart of the Milky Way Where would science fiction be without black holes? As a plot device they are without equal. They can imperil our plucky hero as his spacecraft is sucked like a spider down a plughole to (almost) certain doom and they provide a handy shortcut to the past, or future, in the form of a wormhole. But despite their ubiquity in TV and film, astronomers have never actually seen one. In fact, everything we know of black holes comes from theory and indirect observations of the effects they have on the space around them. Astronomers and scientists from across the world met last week to discuss the project, which has been dubbed ‘The Event Horizon Telescope’.

Stephen Hawking's Time Machine. In an article in the Daily Mail this week, British cosmologist Stephen Hawking outlined not one, but three, theoretically realistic ideas for traveling through time, one of which he says is even practical. 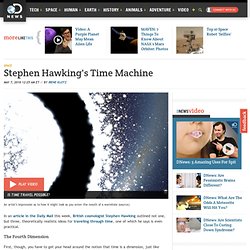 The Fourth Dimension First, though, you have to get your head around the notion that time is a dimension, just like width, height and length. Hawking uses the example of driving in your car: You go forward. That’s one direction. You turn left or right, that’s a second. “Time travel movies often feature a vast, energy-hungry machine. SLIDE SHOW: The most accurate time travel methods in science fiction. The laws of physics actually accommodate the notion of time travel, through portals known as wormholes.

“The truth is wormholes are all around us, only they’re too small to see. Quantum Foam and Tiny Wormholes “Down at the smallest of scales, smaller even than molecules, smaller than atoms, we get to a place called the quantum foam. Discovery News.