The Origin, History, Evolution & Future of the Universe

Did BLACK HOLES help clear the way for life to thrive? In the early days of the universe, space was filled with exploding stars and spinning dust clouds – the same elements as the modern universe, but occupying a much smaller patch of galactic real estate. 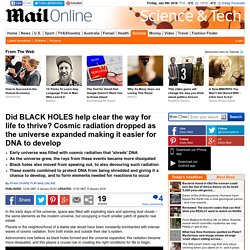 Planets in the neighbourhood of a stable star would have been constantly bombarded with intense waves of cosmic radiation, from both inside and outside their star’s system. Astronomers now believe as black holes formed and the universe expanded, this radiation became more dissipated, and this played a crucial role in creating the right conditions for life to begin. Cosmic radiation 'shreds' DNA and other building blocks of life. When the universe was in its infancy and smaller than it is today, it would have been awash with such radiation as star systems (Milky Way pictured) and black holes were established.

This radiation would have then occupied a relatively confined space Cosmic radiation 'shreds' DNA and other building blocks needed for life. Loaded: 0% Progress: 0% Pablo Carlos Budassi reveals circular artwork of Earth to the Andromeda galaxy. An artist used logarithmic maps and satellite images to created a piece of artwork that is out of this world. 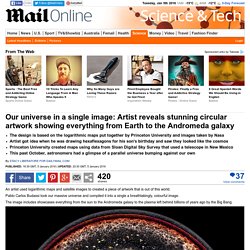 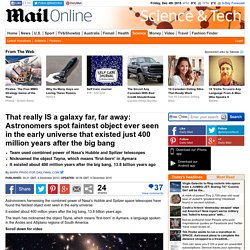 It existed about 400 million years after the big bang, 13.8 billion years ago. The team has nicknamed the object Tayna, which means 'first-born' in Aymara, a language spoken in the Andes and Altiplano regions of South America. Scroll down for video. Planck telescope maps light of the big bang scattered across the universe. The most detailed map ever made of the oldest light to shine through the universe has been released by scientists at the European Space Agency (ESA). 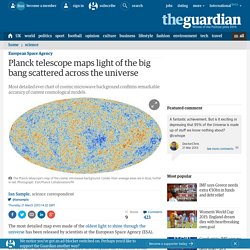 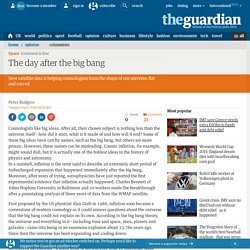 After all, their chosen subject is nothing less than the universe itself - how did it start, what is it made of and how will it end? Some of these big ideas have catchy names, such as the big bang, but others are more prosaic. However, these names can be misleading. Cosmic inflation, for example, might sound dull, but it is actually one of the boldest ideas in the history of physics and astronomy. Bicep2 will allow us to work out how hot the big bang was. It seemed that no sooner had everyone calmed down after the confirmation of the Higgs boson than another huge scientific discovery was announced. 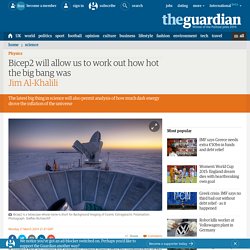 News of Bicep2 broke when the Guardian published an online article last Friday, and since then cosmologists and physicists have taken to the internet to try to explain, with varying degrees of success, what the fuss is about. My turn. Bicep2, which stands for Background Imaging of Cosmic Extragalactic Polarisation, is the second phase of an experiment being done at the South Pole, where the air is clear and dry, aimed at detecting weak microwave radiation from space using highly sensitive telescopes.

Their work began with the cosmic microwave background, or CMB, a form of electromagnetic radiation that pervades space. It was first detected half a century ago and is a cornerstone of cosmology, supporting evidence for a cataclysmic event known as the hot big bang that happened 14bn years ago. Hubble and Spitzer telescopes look deep into space to study early universe. Two venerable space telescopes, the Hubble and the Spitzer, have teamed up to study the very early universe, and here's what they see at the cosmic dawn: a wild and woolly party, with brilliant blue stars that aren't ready to settle down into anything so structured as a conventional spiral galaxy. 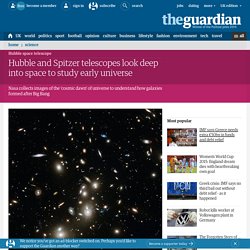 Instead, the early years of the universe featured a profusion of small, irregular, blobby galaxies that were popping with big, hot, super-luminous stars forming at a furious rate. Galaxies were colliding all over the place. Ray Villard, a spokesman for the Space Telescope Science Institute, which conducts Hubble research for Nasa, said it's like seeing the finale of a fireworks show, just that it's close to the beginning of time. Universe recreated in massive computer simulation. Researchers have created the most detailed simulation of the history of the universe, complete with exploding gas clouds, swirling galaxies, ravenous black holes and countless stars – born to die in violent supernovae that blast the chemical elements for planets and life out into the cosmos. 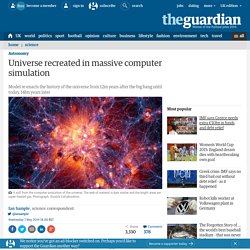 Described as one of the most complex computer models ever created, the simulation was crunched on supercomputers that took six months to complete calculations that would have taken an average desktop computer 2,000 years to process. First stars appeared 100m years later than thought, research finds. The first stars twinkled into life some 100m years later than was previously thought, research suggests. 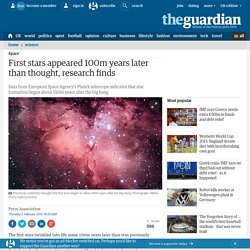 Data from the European Space Agency’s Planck telescope indicates that star formation began about 550m years after the big bang that gave birth to the universe. Before that time, described as the “reionisation” epoch, the cosmos occupied a dark age devoid of visible light. The big bang 13.8bn years ago was when matter, space and even time exploded into existence.

One Big Bang, or were there many? The universe is at least 986 billion years older than physicists thought and is probably much older still, according to a radical new theory. 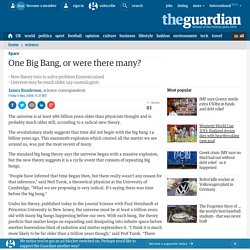 The revolutionary study suggests that time did not begin with the big bang 14 billion years ago. This mammoth explosion which created all the matter we see around us, was just the most recent of many. The standard big bang theory says the universe began with a massive explosion, but the new theory suggests it is a cyclic event that consists of repeating big bangs. "People have inferred that time began then, but there really wasn't any reason for that inference," said Neil Turok, a theoretical physicist at the University of Cambridge, "What we are proposing is very radical. Not with a bang, but with a Big Rip: how the world will end. Everything we know, and everything else besides, burst into existence at the Big Bang. Now scientists have concluded that we could be heading for an equally dramatic cosmic finale: the Big Rip. A new theoretical model suggests that as the universe expands, everything, from galaxies, planets and atomic particles to space-time itself, will eventually be torn apart before vanishing from view.

There’s no need for immediate alarm, however: the extreme sequence of events is predicted for around 22 billion years from now. Dr Marcelo Disconzi, the mathematician who led the work at Vanderbilt University in Tennessee, said: “The idea of the Big Rip is that eventually even the constituents of matter would start separating from each other. You’d be seeing all the atoms being ripped apart ... it’s fair to say that it’s a dramatic scenario.” Galaxies could give glimpse of the instant time began - space - 31 October 2012. The structure of the universe at its very first instant – when time itself was still emerging – may be visible in the pattern of galaxies today.

That's the latest prediction of a theory that fuses quantum mechanics and Einstein's general theory of relativity. Relativity describes gravity as a curve in the geometry of space and time. This mostly works, but quails at the quantum scale of the very start of the big bang, when everything was infinitely dense. Enter loop quantum gravity theory, which says space-time is underpinned by a network of loops in which no distance can be smaller than 10-35 metres, a unit known as the Planck length.

This banishes infinite densities. Now Abhay Ashtekar, Ivan Agullo and William Nelson of Penn State University in University Park have used loop quantum gravity to examine what structures would emerge as the universe bounced into being. Discernible distortion Fluctuations would have arisen in that first quantum instant, which is set at 10-44 seconds. Black hole Big Bang theory: Did the universe start with a braneworld white hole? Courtesy of NASA Did the universe begin with a black hole in a higher-dimensional reality? Depending on your level of cynicism, that question sounds like either an exciting idea or something you might hear from the stoner in your social circle.

The reality: It's a bit of interesting but speculative science from physicists attempting to solve a somewhat obscure problem in cosmology. Despite media coverage in Nature (later picked up by PBS and io9), the paper describing the research is unpublished and doesn't correspond to existing observations. Stephen Hawking's big ideas ... made simple - video animation. The end of the world really is nigh (but don't worry, we have a few billion years left) Leading researcher claims a 'bubble' of an alternative universe will appear, expand out and destroy usResearchers say 'catastrophic' event is tens of millions of years away Published: 15:40 GMT, 19 February 2013 | Updated: 22:18 GMT, 19 February 2013 Scientists studying the properties of the so called 'God Particle' say they may be able to determine exactly how the universe will end.

A concept known as vacuum instability could result, billions of years from now, in a new universe opening up in the present one as a tiny 'bubble', and eventually replacing it, they say. 'If you use all the physics that we know now and you do what you think is a straightforward calculation, it's bad news,' Joseph Lykken, a theoretical physicist with the Fermi National Accelerator Laboratory in Batavia, Illinois, told reporters at the American Association for the Advancement of Science meeting in Boston.

CERN, the world's largest particle physics laboratory in Geneva, Switzerland. Planck Cosmic Microwave BackgroundExquisite Map of Cosmos Hints at Universe's Birth. A map of the universe based on its oldest light is giving astronomers hope that they may be able to answer some of the deepest questions of the cosmos, including how it got started. Scientists met this week at the University of California, Davis to pore over the treasure trove of data published two months ago from the European Planck spacecraft. The observatory measures what's called the cosmic microwave background — light spread across the sky that dates from soon after the Big Bang that kick-started the universe.

"We have the best map ever of the cosmic microwave background, and that shows us what the universe was like 370,000 years after the Big Bang," said Charles Lawrence, a scientist at NASA's Jet Propulsion Laboratory in California who is the lead U.S. scientist on the Planck project. "If it weren't for the wonderful data, I'd be thinking maybe some of these problems are too difficult for us right now," Albrecht said. Oldest Light In The Universe - How It Traveled To Us. Calculating Magnetic Fields In The Early Universe - Space News. How a new map of the early universe is like a hedgehog. Life (and the universe) really is a rollercoaster: Researchers say the universe is expanding as if we were 'rushing downhill' on a fairground attraction.

By Mark Prigg. Alien life: Are we late for the party? - Mail Online - Michael Hanlon's Science blog: From The Cutting Edge. The amazing video that shows 14 billion years of the universe evolving in just 78 seconds. Special Report: The History & Future of the Cosmos. SPECIAL REPORT: Our universe is both ancient and vast, and expanding out farther and faster every day. 1: Video Show: A Blueprint of the Universe. 2: Images: Peering Back to the Big Bang & Early Universe. 3: The Universe: Big Bang to Now in 10 Easy Steps. By Denise Chow, SPACE.com Staff Writer | October 18, 2011 05:00pm ET Credit: Subaru/ P. 4: The History & Structure of the Universe (Infographic)

5: The Big Bang: What Really Happened at Our Universe's Birth? It took quite a bit more than seven days to create the universe as we know it today. 6: The Universe's Dark Ages: How Our Cosmos Survived. 7: The Universe Today: What It All Looks Like Now. 8: Endless Void or Big Crunch: How Will the Universe End?