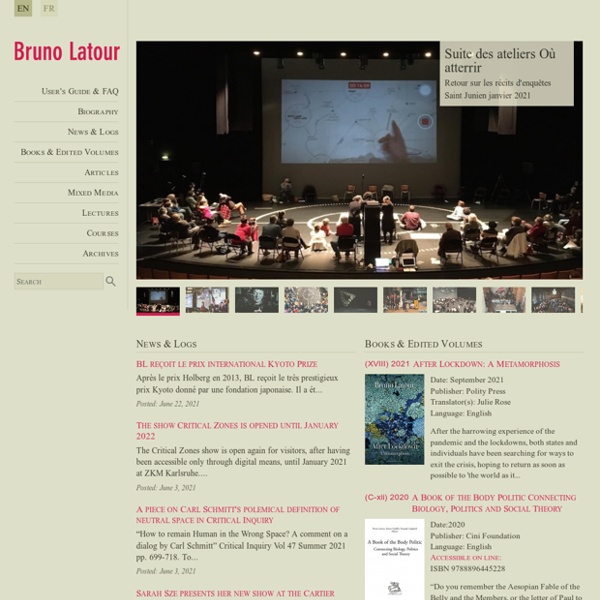 Social Theory Rewired Cultural Capital While he didn’t consider himself a Marxist sociologist, the theories of Karl Marx heavily influenced Bourdieu’s thinking. Marx’s influence is perhaps most evident in Bourdieu’s theory of cultural capital. Like Marx, Bourdieu argued that capital formed the foundation of social life and dictated one’s position within the social order. For Bourdieu and Marx both, the more capital one has, the more powerful a position one occupies in social life. However, Bourdieu extended Marx’s idea of capital beyond the economic and into the more symbolic realm of culture.

ASA Wikipedia Initiative ASA Wikipedia Initiative ASA is calling on its members to support the Association’s mission to deploy the power of Wikipedia to represent the discipline of sociology as fully and as accurately as possible. In addition, we seek to promote the free teaching of sociology worldwide. Justin E. H. Smith [Forthcoming from Princeton University Press] Bibliography Works originally published prior to 1900 Acosta, José de. As We May Think - Magazine As Director of the Office of Scientific Research and Development, Dr. Vannevar Bush has coordinated the activities of some six thousand leading American scientists in the application of science to warfare. In this significant article he holds up an incentive for scientists when the fighting has ceased. He urges that men of science should then turn to the massive task of making more accessible our bewildering store of knowledge. For years inventions have extended man's physical powers rather than the powers of his mind. Trip hammers that multiply the fists, microscopes that sharpen the eye, and engines of destruction and detection are new results, but not the end results, of modern science.

Interview: Zygmunt Bauman: “Social media are a trap” Zygmunt Bauman has just celebrated his 90th birthday and taken two flights from his home in the northern British city of Leeds to get to an event in Burgos, northern Spain. He admits to being tired as we begin the interview, but he still manages to express his ideas calmly and clearly, taking his time with each response because he hates giving simple answers to complex questions. Since developing his theory of liquid modernity in the late 1990s – which describes our age as one in which “all agreements are temporary, fleeting, and valid only until further notice” – he has become a leading figure in the field of sociology. His work on inequality and his critique of what he sees as the failure of politics to meet people’s expectations, along with a highly pessimistic view of the future of society, have been picked up by the so-called May 15 “Indignant” movement in Spain – although he has repeatedly highlighted its weaknesses.

Brian Leiter Most Cited Law Professors by Specialty, 2000-2007 November 12, 2007 Corrected December 18, 2007 These listings are drawn from the same data we collected in July 2007 about citations to faculty since the year 2000 that were incorporated into the Ranking of Law Schools by Scholarly Impact released on September 1, 2007. In several cases (Bartlett, Bibas, and Horwitz) we attempted to correct for the fact that these scholars are frequently cited with different spellings of their names (that had not been corrected for in the Scholarly Impact study, but also would not have affected the overall results). We also had to conduct new searches for highly-cited faculty in some areas who do not teach at schools included in the original study. Fernand Braudel – A Biography Fernand Braudel (1902-1985) Fernand Braudel was born on 24 August 1902 in Luméville (northwestern Lorraine), in the Meuse department, near Verdun, France. The son of a teacher, he spent his childhood in the countryside, living often at his grandmother's farmhouse.

Simone de Beauvoir Interview and photography The interview took place in Miss de Beauvoir’s studio on the rue Schoëlcher in Montparnasse, a five-minute walk from Sartre’s apartment. We worked in a large, sunny room which serves as her study and sitting room. Shelves are crammed with surprisingly uninteresting books. Shut up and Write! A couple of months ago a friend told me about the ‘Shut up and Write’ movement in San Francisco. The idea is quite simple; a group of writers converge on a location, presumably one with good coffee. After 15 minutes of chit chat they, well – just shut up and write. They write solidly for an hour, then take a break for coffee and more chats before they leave.

Michel Foucault Born in Poitiers, France to an upper-middle-class family, Foucault was educated at the Lycée Henri-IV and then the École Normale Supérieure, where he developed an interest in philosophy and came under the influence of his tutors Jean Hyppolite and Louis Althusser. After several years as a cultural diplomat abroad, he returned to France and published his first major book, The History of Madness. After obtaining work between 1960 and 1966 at the University of Clermont-Ferrand, he produced two more significant publications, The Birth of the Clinic and The Order of Things, which displayed his increasing involvement with structuralism, a theoretical movement in social anthropology from which he later distanced himself. These first three histories were examples of a historiographical technique Foucault was developing which he called "archaeology". Early life[edit]