Role of Animation in Student's Learning. About ETR Community EdTechReview (ETR) is a community of and for everyone involved in education technology to connect and collaborate both online and offline to discover, learn, utilize and share about the best ways technology can improve learning, teaching, and leading in the 21st century. 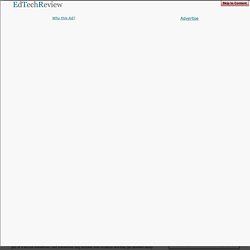 Teachingfilmandmedia - Unit Plan for Documentaries in a Film Studies Classroom. Masterpiece Theatre. Introduction Why Study Film in the Classroom? 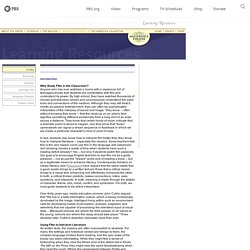 Anyone who has ever watched a movie with a classroom full of teenagers knows that students are comfortable with film and understand its power. By high school, they have watched thousands of movies and television shows and unconsciously understand the basic tools and conventions of the medium. Although they may still treat it chiefly as passive entertainment, they can often be sophisticated interpreters of the interplay of sound and image. They know -- often without knowing they know -- that the close-up on an actor's face signifies something different emotionally from a long shot of an actor across a distance.

In fact, students may know how to interpret film better than they know how to interpret literature -- especially the classics. Over thirty years ago, media education pioneer John Culkin argued that "We live in a total-information culture, which is being increasingly dominated by the image. Benefits for Teachers using educational video to teach in a Classroom. Teachers Using subtitled video as a teaching aid in the classroom gain many benefits including greater student interest and improved reading and literacy skills. 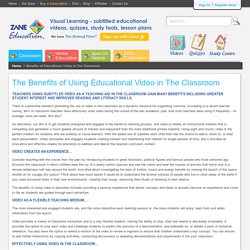 There is substantial research promoting the use of video in the classroom as a dynamic resource for supporting curricula. According to a recent teacher survey, 94% of classroom teachers have effectively used video during the course of the last academic year. And most teachers were using it frequently - on average, once per week. But why?. As educators, our aim is to get students energized and engaged in the hands-on learning process, and video is clearly an instructional medium that is compelling and generates a much greater amount of interest and enjoyment than the more traditional printed material. Video Creates an Experience… Consider teaching with the voices from the past by introducing students to great historians, political figures and famous people who lived centuries ago. How to Use Online Video in Your Classroom.

It's one thing to talk about Mount St. 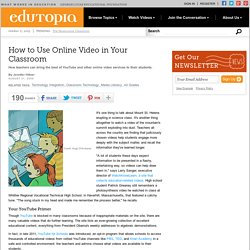 Helens erupting in science class. It's another thing altogether to watch a video of the mountain's summit exploding into dust. Teachers all across the country are finding that judiciously chosen videos help students engage more deeply with the subject matter, and recall the information they've learned longer. "A lot of students these days expect information to be presented in a flashy, entertaining way, so videos can help draw them in," says Larry Sanger, executive director of WatchKnowLearn, a site that collects education-related videos. High school student Patrick Greaney still remembers a photosynthesis video he watched in class at Whittier Regional Vocational Technical High School, in Haverhill, Massachusetts, that featured a catchy tune. Your YouTube Primer Though YouTube is blocked in many classrooms because of inappropriate materials on the site, there are many valuable videos that do further learning. First, register with YouTube. Education videos: Ten ways to use them well.

Why use video resources? 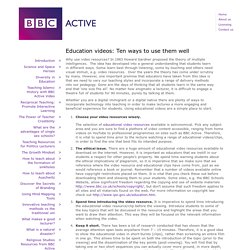 In 1983 Howard Gardner proposed the theory of multiple intelligences. The idea has developed into a general understanding that students learn in different ways. Some learn best through listening; some by touching and others need visual stimuli, e.g. video resources. Over the years the theory has come under scrutiny by many. However, one important premise that educators have taken from this idea is that we need to vary our teaching styles and incorporate a range of delivery methods into our pedagogy. Whether you are a digital immigrant or a digital native there are plenty of ways to incorporate technology into teaching in order to make lectures a more engaging and beneficial experience for students. Choose your video resources wisely. Pedagogical benefits of video for teaching and learning. There are many benefits to using video in education as shown in several decades of research. 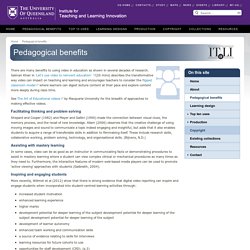 Salman Khan in 'Let's use video to reinvent education' (20 mins) describes the transformative way video can impact on teaching and learning and encourages teachers to consider the flipped classroom model where learners can digest lecture content at their pace and explore content more deeply during class time. See The Art of Educational videos by Macquarie University for the breadth of approaches to making effective videos. Facilitating thinking and problem solving Shepard and Cooper (1982) and Mayer and Gallini (1990) made the connection between visual clues, the memory process, and the recall of new knowledge. Allam (2006) observes that the creative challenge of using moving images and sound to communicate a topic indeed engaging and insightful, but adds that it also enables students to acquire a range of transferable skills in addition to filmmaking itself.

Assisting with mastery learning. Pedagogical benefits of video for teaching and learning.