Adora Svitak: What adults can learn from kids 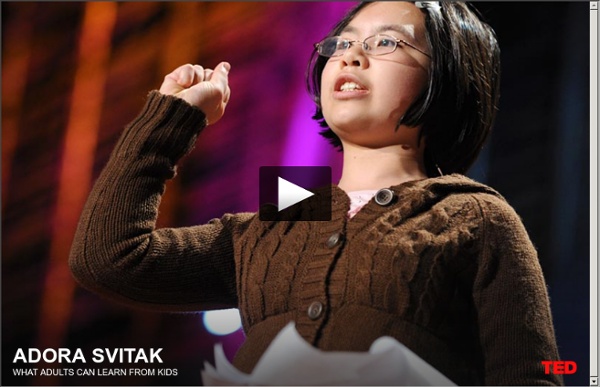 A Urine Powered Generator : Maker Faire Africa Posted on Tuesday, November 6, 2012 · 168 Comments Possibly one of the more unexpected products at Maker Faire Africa this year in Lagos is a urine powered generator, created by four girls. The girls are Duro-Aina Adebola (14), Akindele Abiola (14), Faleke Oluwatoyin (14) and Bello Eniola (15). Top 10+ TED Videos On Education & Learning TED offers great ideas through its videos. Today we’ve featured more than 10 of the best videos on education and learning from some of the greatest thinkers and innovators who have spoken at TED. The videos below touch on major topics in education around the globe: What’s your favorite TED video on education and learning? Advocacy Partner Extending Your Reach: Online Counseling for Changing Minds 15-Year-Old Develops Hollow Flashlight Powered by Body Heat From a sleeping bag that charges your gadgets to entire buildings warmed by body heat, scientists are harvesting the heat emitted by humans as a source of renewable energy. But the latest development in thermoelectric energy generation doesn’t come from a high-tech lab at MIT; it comes from Ann Makosinski, a 15-year-old Canadian girl who developed a flashlight that is powered by the heat from a human hand. With the aim of reducing the number of single-use batteries that are thrown in landfills, Makosinski developed the innovative flashlight, which can be developed cheaply and deployed to populations that can’t afford electricity to light their homes. To create the thermoelectric flashlight, Makosinski used Peltier tiles, which produce electricity when heated on one side and cooled on the other.

Science in Action Winner for 2013: Elif Bilgin Elif Bilgin, winner of the 2013 Science in Action award, a $50,000 prize sponsored by Scientific American as part of the Google Science Fair. Credit: Elif Bilgin “Genius,” Thomas Edison famously said, “is 1 percent inspiration and 99 percent perspiration.” He would have found a kindred spirit in Elif Bilgin, 16, of Istanbul, Turkey, winner of the 2013 $50,000 Science in Action award, part of the third annual Google Science Fair. The award honors a project that can make a practical difference by addressing an environmental, health or resources challenge; it should be innovative, easy to put into action and reproducible in other communities.

GSF 2013 : Project : Going Bananas!-Using Banana Peels in the Production of Bio-Plastic As A Replacement of the Traditional Petroleum Based Plastic The banana fruit’s peel was selected for this experiment because it is a waste material rich of starch-according to Songklanakarin Journal of Science and Technology, the proximate composition of a banana peel is shown below. Items Content (g/100 g dry matter) Protein: 8.6±0.1 Student finds new way of turning plastic into biofuel [CAIRO] A method for generating biofuel by breaking down plastics using a low-cost catalyst will be developed further in the United Kingdom next month (16 July). The process was developed by a sixteen-year-old Egyptian student, Azza Abdel Hamid Faiad, from the Zahran Language School in Alexandria, Egypt. Faiad won the European Fusion Development Agreement award at the 23rd European Union Contest for Young Scientists — involving 130 competitors from 37 countries — held in Finland last year (23–28 September). Her prize is a week-long placement at the Joint European Torus (JET) facility — the focal point of the European fusion research programme — at the UK-based Culham Centre for Fusion Energy, UK, where Faiad will present her project and receive help with its development.

7 Incredible Inventions by Teenage Wunderkinds When many of us were in our teens, work for science fairs comprised cut and paste displays on colorful presentation boards, and our hobbies weren't exactly about to change the world. But across the globe, teenagers with creative, scientific minds are already devising extraordinary devices, revolutionary materials and renewable technologies that might just change our planet for the greener. Click through to see some of their most incredible inventions - from bioplastics made from bananas to pee-powered energy generators and an ocean cleanup array to rid the world's oceans of waste. An Ocean Clean Up Array to Remove 7,250,000 Tons of Plastic From the World’s Oceans When we first covered Boyan Slat’s Ocean Cleanup Array it generated a phenomenal amount of excitement, as well as debate.

Rachel Parent Debates Kevin O'Leary About GMOs (VIDEO) Anti-GMO activist Rachel Parent got in a spirited debate with Kevin O'Leary on CBC's "The Lang And O'Leary Exchange" Wednesday night. Parent, who scored the debate after a speech she gave critical of O'Leary's comments about GMOs was featured on HuffPost Canada, argued genetically-modified foods should be labelled in Canada and the United States. Europe, Japan, Australia and other nations require GMO labels, but Canada and the U.S. do not. O'Leary was quick to suggest Parent is essentially operating as a lobbyist for anti-GMO groups and said changes to the DNA of crops will save lives. "Let's say you weren't as lucky as you are, you were born in an Asian country, you're 14 years old, your only food was rice that had no Vitamin A in it, you're going blind and then you died," O'Leary said. "Five-hundred-and-fifty-thousand people your age die that way every year.

The world is yours: Kids take the lead in the climate fight The world might be headed to hell in a plastic basket of coal, but like Bob Marley said, you can’t blame the youth. In fact, the youth are rising up to make sure that nobody ever tries to pin this on them. Organizers and politicians like to use literal poster children as a way to pull on heartstrings when reaching policy impasses. But kids today are taking the climate change fight into their own hands, refusing the role of mere victim and collateral damage, as we’re seeing at the local level in Baltimore, and also on the national stage. I reported last December that students in South Baltimore have been organizing their neighbors to fight off a trash incinerator that the state of Maryland has permitted to be built within a mile of two schools in the area.

Navajo Teen Harnesses Solar Energy, Wins An Award (VIDEO) Teen scientist harnesses sun power to help Navajo community New Mexico teen Raquel Redshirt uses everyday materials and the sun to build solar ovens, fulfilling a Navajo community need and winning an award at the Intel ISEF competition. Growing up on New Mexico’s Navajo Nation, Raquel Redshirt was well aware of the needs of her community. Many of her impoverished neighbors lacked basics such as electricity, as well as stoves and ovens to cook food. Though resources in the high desert are limited, Raquel realized one was inexhaustible: the sun.