10 Assessments You Can Perform In 90 Seconds 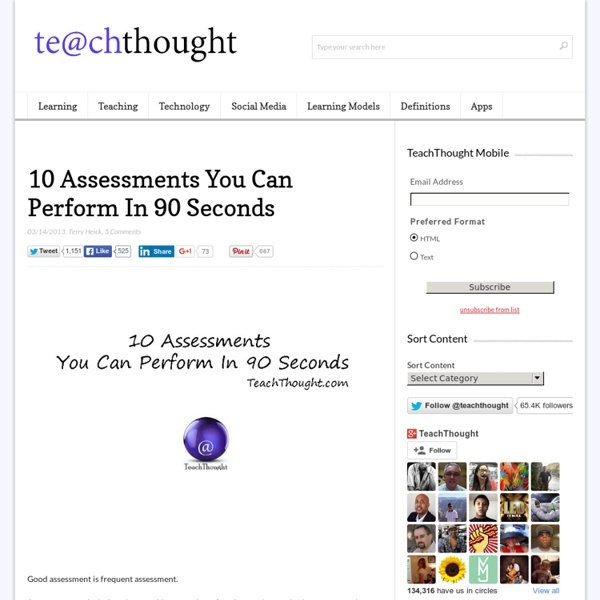 Good assessment is frequent assessment. Any assessment is designed to provide a snapshot of student understand—the more snapshots, the more complete the full picture of knowledge. On its best day, an assessment will be 100% effective, telling you exactly what a student understands. More commonly, the return will be significantly lower as the wording of questions, the student’s sense of self-efficacy, or other factors diminish their assessment performance. It sounds obvious, but a student is a human being with an entire universe of personal problems, distraction, and related challenges in recalling the information in the form the assessment demands. This makes a strong argument for frequent assessment, as it can be too easy to over-react and “remediate” students who may be banging against the limits of the assessment’s design rather than their own understanding. Simple Assessments The word “simple” here is misleading. 1. 2. 3. 4. 5. 6. 7. 8. 9. Draw what you do understand. 10.

Getting on top of marking For the first time in my 10 years of teaching, I don’t feel the stress of marking and I hope to explain how in this post. I’ll start by saying there are no quick fixes when it comes to marking. You can’t cut corners. There are some methods to reduce the time spent doing it, but the ways to get on top are more about how to increase the impact of marking. Mainly, it’s about establishing a different relationship between you and marking.

Formative Assessment Strategies - Dylan Wiliam On-Demand Webinars If you haven’t had the pleasure and privilege to hear Dylan Wiliam speak before you can now access the three-part webinar series he gave last year on formative assessment. Dylan is an expert on formative assessment strategies and how to use them in the classroom to drive academic achievement. The webinar series provides a comprehensive, deep-dive into the foundation and value of his approach. Luis Antonio Tagle, Filipino Cardinal, Stirs Papal Talk With Rapid Rise IMUS, Philippines -- Asia's most prominent Roman Catholic leader knows how to reach the masses: He sings on stage, preaches on TV, brings churchgoers to laughter and tears with his homilies. And he's on Facebook. But Philippine Cardinal Luis Antonio Tagle's best response against the tide of secularism, clergy sex abuse scandals and rival-faith competition could be his reputation for humility. His compassion for the poor and unassuming ways have impressed followers in his homeland, Asia's largest Catholic nation, and church leaders in the Vatican. Tagle's rising star has opened a previously unimaginable possibility: An Asian pope.

10 Things You Don't Know About Formative Assessment Share with Friends 3KShares Assessments come in varied forms, and they’re executed for different purposes. While summative assessments attempt to measure mastery at the end of a learning experience, the best formative assessments illuminate the strengths and needs of learners throughout the experience, enabling teachers to respond in ways that are just right and just in time. Blueprint Teacher: 'So that' EBITs for peer assessed writing I have recently taught my Year 4 English class again. Their class teacher had set them the task of redrafting a myth that they had written the previous day. I have to say I had some apprehensions prior to teaching the lesson, as they had rewritten the myth of Persephone as a Mayan myth and I was going introduce a chef themed peer assessment tool (as their topic that term was chefs). However, when I looked at their first drafts that morning I could see that they had risen to the challenge.

How to BYOT for Learning? I have been out visiting a lot of schools over the past few months learning about culture, demographics, economic status of neighbourhoods, existing and historical use of and interest in technology, and capacity to weave technology into common practice. My District has a fascinating array of schools. I was in a 105 year old secondary school last week in a highly urban area with a rather low socio economic status. The school is quite oddly designed and has an institutional feel and look, but I suppose 100 years ago architects and District officials thought differently about school. Educational Leadership:Informative Assessment:Feedback That Fits December 2007/January 2008 | Volume 65 | Number 4 Informative Assessment Pages 54-59 Susan M. Brookhart From the student's point of view, the ideal "script" for formative assessment reads something like, "Here is how close you are to the knowledge or skills you are trying to develop, and here's what you need to do next." The feedback teachers give students is at the heart of that script.