Rules:
- Mix of Timline/Importance-Ranking
- The nearer to the center, the older/more important
- Importance freely discussable, Timline only limited

History of the punk subculture. Punk rock. Punk rock (or simply punk) is a rock music genre that developed between 1974 and 1976 in the United States, United Kingdom, and Australia. 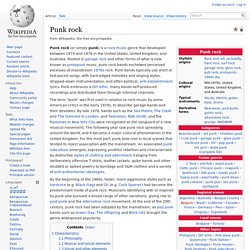 Rooted in garage rock and other forms of what is now known as protopunk music, punk rock bands eschewed perceived excesses of mainstream 1970s rock. Punk bands typically use short or fast-paced songs, with hard-edged melodies and singing styles, stripped-down instrumentation, and often political, anti-establishment lyrics. Punk embraces a DIY ethic; many bands self-produced recordings and distributed them through informal channels. Characteristics Philosophy Technical accessibility and a DIY spirit are prized in punk rock. Ramones. The Ramones were an American rock band that formed in the New York City neighborhood of Forest Hills, Queens, in 1974. 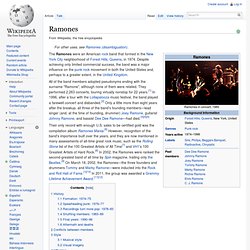 Despite achieving only limited commercial success, the band was a major influence on the punk rock movement in both the United States and, perhaps to a greater extent, in the United Kingdom. All of the band members adopted pseudonyms ending with the surname "Ramone", although none of them were related. They performed 2,263 concerts, touring virtually nonstop for 22 years.[1] In 1996, after a tour with the Lollapalooza music festival, the band played a farewell concert and disbanded.[2] Only a little more than eight years after the breakup, all three of the band's founding members—lead singer (and, at the time of founding, drummer) Joey Ramone, guitarist Johnny Ramone, and bassist Dee Dee Ramone—had died.[3][4][5] History[edit] Formation: 1974–75[edit]

Sex Pistols. The Sex Pistols were an English punk rock band that formed in London in 1975. 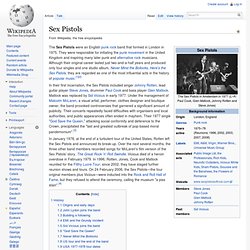 They were responsible for initiating the punk movement in the United Kingdom and inspiring many later punk and alternative rock musicians. Although their original career lasted just two-and-a-half years and produced only four singles and one studio album, Never Mind the Bollocks, Here's the Sex Pistols, they are regarded as one of the most influential acts in the history of popular music.[1][2] In January 1978, at the end of a turbulent tour of the United States, Rotten left the Sex Pistols and announced its break-up. Over the next several months, the three other band members recorded songs for McLaren's film version of the Sex Pistols' story, The Great Rock 'n' Roll Swindle.

Vicious died of a heroin overdose in February 1979. The Adicts. The Adicts are an English punk band from Ipswich, Suffolk, England. 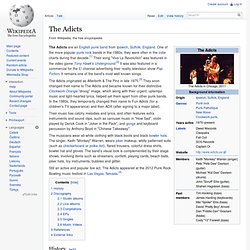 One of the more popular punk rock bands in the 1980s, they were often in the indie charts during that decade.[1] Their song "Viva La Revolution" was featured in the video game Tony Hawk's Underground.[2] It was also featured in a commercial for the E! Channel advertising their reality television show Pop Fiction. It remains one of the band's most well known songs.

The Clash. The Clash's politicised lyrics, musical experimentation, promotion of DIY ethics and rebellious attitude had a far-reaching influence on rock, alternative rock in particular.[2] They became widely referred to as "The Only Band That Matters", originally a promotional slogan introduced by the group's record label, CBS. 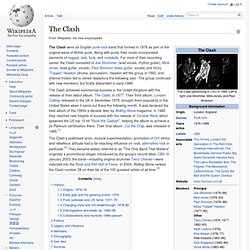 In January 2003, the band—including original drummer Terry Chimes—were inducted into the Rock and Roll Hall of Fame. In 2004, Rolling Stone ranked the Clash number 28 on their list of the 100 greatest artists of all time.[3] History[edit] Origins: 1974–76[edit] The act was still searching for a lead singer. "so I went out in the crowd which was fairly sparse. On 30 May, Rhodes and Levene met surreptitiously with Strummer after a 101'ers gig.

Joe Strummer. Paul Simonon. Biography[edit] Simonon was born in Croydon, Surrey.[1] His father, Gustave, was a clerk in the civil service and his mother, Elaine, was a librarian. 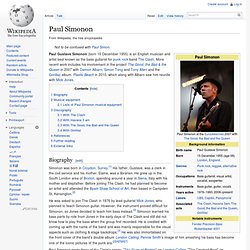 He grew up in the South London area of Brixton, spending around a year in Siena, Italy with his mother and stepfather. Before joining The Clash, he had planned to become an artist and attended the Byam Shaw School of Art, then based in Campden St, Kensington.[2] Paul Simonon wrote three of the Clash's songs: "The Guns of Brixton" on London Calling, "The Crooked Beat" on Sandinista! Topper Headon. Early life[edit] The Clash[edit] I knew Mick [Jones] a year and half ago. 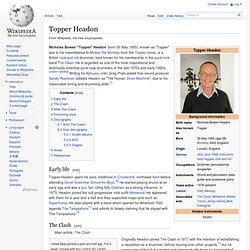 For a week I played with the London SS. Mick Jones. But even before the Dolls, I used to follow bands around. 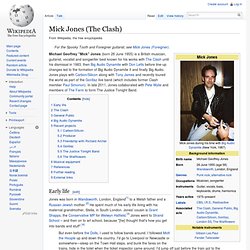 I followed Mott the Hoople up and down the country. I'd go to Liverpool or Newcastle or somewhere—sleep on the Town Hall steps, and bunk the fares on the trains, hide in the toilet when the ticket inspector came around. I'd jump off just before the train got to the station and climb over the fence. It was great times, and I always knew I wanted to be in a band and play guitar.

That was it for me. The Damned (band) The Damned are an English rock band formed in London in 1976.[2][3] They were the first punk rock band from the United Kingdom to release a single ("New Rose"),[4] an album (Damned Damned Damned),[5] to have a record on the UK music charts, and to tour the United States. 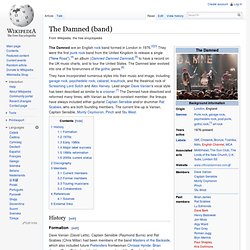 The Damned later evolved into one of the forerunners of the gothic genre.[6] The Damned played their first gig at a free festival held in Croydon. LiLiPUT. LiLiPUT were a Swiss female post-punk band active from 1978 to 1983, initially known as Kleenex. 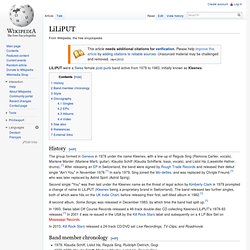 History[edit] The group formed in Geneva in 1978 under the name Kleenex, with a line-up of Regula Sing (Ramona Carlier, vocals), Marlene Marder (Marlene Marti, guitar), Klaudia Schiff (Klaudia Schifferle, bass, vocals), and Lislot Ha (Lieselotte Hafner, drums).[1] After releasing an EP in Switzerland, the band were signed by Rough Trade Records and released their debut single "Ain't You" in November 1978.[1] In early 1979, Sing joined the Mo-dettes, and was replaced by Chrigle Freund.[1] who was later replaced by Astrid Spirit (Astrid Spirig). Second single "You" was their last under the Kleenex name as the threat of legal action by Kimberly-Clark in 1979 prompted a change of name to LiLiPUT (Kleenex being a proprietary brand in Switzerland). The Peacocks (band) The Peacocks are a Swiss rockabilly influenced, upright bass driven punk rock band[1] from Winterthur founded in 1990. The trio consists of Hasu Langhart on the guitar/vocals, Jürg Luder on drums, and Simon Langhard on the double bass.

Their signature look comprises black 1950s-style suits and pompadour hairstyles.[2] The Peacocks are known for the infectious energy of their live performances. Their original lineup consisted of Hasu on guitar, Adi on drums, and Michi on double bass. Michi was replaced with Hasu's brother Simon and this lineup continued for five years until Toni replaced Adi as drummer. Celtic punk. Celtic punk is punk rock mixed with traditional Celtic music. The genre was founded in the 1980s by The Pogues, a band of punk musicians in London who celebrated their Irish heritage. Celtic punk bands often play covers of traditional Irish or Scottish folk and political songs, as well as original compositions.[1] Prevalent themes in Celtic punk music include politics, culture, drinking and working class pride.

Characteristics[edit] The Pogues. The Pogues are a Celtic punk band from London, formed in 1982 and fronted by Shane MacGowan. The band reached international prominence in the 1980s and early 1990s. MacGowan left the band in 1991 due to drinking problems but the band continued first with Joe Strummer and then with Spider Stacy on vocals before breaking up in 1996.[1] The band reformed in late 2001, and has been playing regularly ever since, most notably on the US East Coast around St Patrick's Day and across the UK and Ireland every December. The group has yet to record any new music and, according to Spider Stacy on Pogues.com, has no inclination to do so. Flogging Molly.

Ska. Skinhead. Eventually, political affiliations grew in significance for the skinhead subculture, and now the political spectrum within the subculture spans from far right to far left, although many skinheads describe themselves as apolitical. Contemporary skinhead fashions range from clean-cut 1960s mod-influenced styles to less-strict punk- and hardcore-influenced styles.[2] History[edit] Mods of lesser means made do with practical clothing styles that suited their lifestyle and employment circumstances: work boots or army boots, straight-leg jeans or Sta-Prest trousers, button-down shirts, and braces (called suspenders in North America).

When possible, these working class mods spent their money on suits and other sharp outfits to wear at dancehalls, where they enjoyed soul, ska, bluebeat and rocksteady music.[1][6] Eventually different interpretations of the skinhead subculture expanded beyond Britain and continental Europe. Style[edit] A current day skinhead. Female skinheads. Mod (subculture) Oi! Oi! Cockney Rejects. Rocksteady. Reggae. Bob Marley & The Wailers. History[edit] Early years[edit] Bob Marley. Robert Nesta "Bob" Marley OM (6 February 1945 – 11 May 1981) was a Jamaican reggae singer-songwriter and guitarist who achieved international fame and acclaim.[1][2] Starting out in 1963 with the group the Wailers, he forged a distinctive songwriting and vocal style that would later resonate with audiences worldwide.