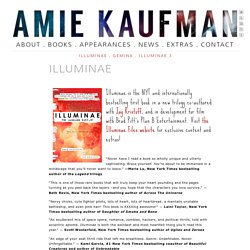 Visit the Illuminae Files website for exclusive content and extras! “Never have I read a book so wholly unique and utterly captivating. Brace yourself. You’re about to be immersed in a mindscape that you’ll never want to leave.” —Marie Lu, New York Times bestselling author of the Legend trilogy “This is one of those rare books that will truly keep your heart pounding and the pages turning as you peel back the layers –and you hope that the characters you love survive.” — Beth Revis, New York Times bestselling author of Across The Universe “Nervy chicks, cute fighter pilots, lots of heart, lots of heartbreak, a mentally unstable battleship, and even pink hair! “An exuberant mix of space opera, romance, zombies, hackers, and political thrills, told with eccentric aplomb. “Stunningly creative. Reviews/Awards. The 5th Wave (2016) Bernard Cornwell on Adaptations: “Stand back and let them do what they do best”

All readers know the pain of watching a favorite book transform into an adaptation that just doesn’t stack up (*cough*My Sister’s Keeper*cough*), but readers’ frustrations can’t even begin to compare with an author’s. 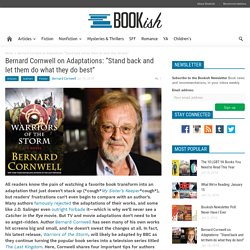 Many authors famously rejected the adaptations of their works, and some like J.D. Salinger even outright forbade it—which is why we’ll never see a Catcher in the Rye movie. But TV and movie adaptations don’t need to be so angst-ridden. Author Bernard Cornwell has seen many of his own works hit screens big and small, and he doesn’t sweat the changes at all. In fact, his latest release, Warriors of the Storm, will likely be adapted by BBC as they continue turning the popular book series into a television series titled The Last Kingdom.

It’s true that my television experience was extremely useful when the two series were made, and that experience taught me the first and most important rule: Don’t get involved So what can I offer a drama production? I hope it is different! MGM Nabs Hot YA Novel 'Everything, Everything' (Exclusive) Warner Bros. Options Hot YA Book 'Sky Is Everywhere' (Exclusive) 24 Books You Should Read, Based On Your Favorite TV Shows. 60 Bookish Films Streaming on Netflix. Book to movie. 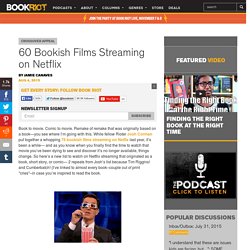 Comic to movie. Amazon. Amazon. 10 Great Films with a Book Tie-In or Based on a Book - Read Me. Gorgeous photography by the very talented Al Richardson. 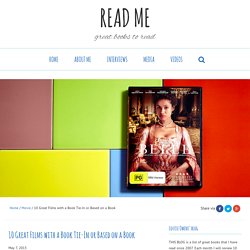 Thanks to Glennon Tiles for the beautiful tiles used as backgrounds. This is my review of 10 great books with a book tie-in or based on a book. ‘The King’s Speech’ directed by Tom Hooper (Paramount, 2010) Anything with Colin Firth and Geoffrey Rush is bound to be a hit, throw in Helena Bonham Carter and a little bit of magic is created. On the Royal Front, this is a great movie about Prince Albert (Colin Firth) who was thrown into the role of King when his father died and later his brother abdicated.

The age of communication via radio means that Albert’s speech stammer cannot be hidden from public any longer. ‘Belle; A True Story of Love that Defied Convention’ directed by Amma Asante (Icon Films, 2013) This costume drama is based on a true story about an illegitimate mixed race daughter, called Dido Elizabeth Belle, of an English Royal Navy Admiral who was raised by her great uncle. THE DUFF - Official Teaser Trailer. 7 Teen Movies Based On Shakespeare That Would Make Him Roll Over In His Grave. 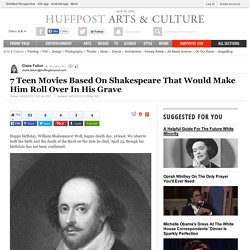 Well, happy death day, at least. We observe both the birth and the death of the Bard on the date he died, April 23, though his birthdate has not been confirmed. Billy, not yet rolling in his grave. Here's what we do know: This is the 399th anniversary of Shakespeare's death, and his outsize importance to Western culture looms as large as ever. Trash - Official International Trailer (Universal Pictures) HD. Night School: The Web Series - Episode One - "Flashback" Twilight Official Movie Trailer HD 2008 Kristin Stewart.