10 Most Inappropriate Video Games Of All Time. From those early days where you would shoot down little invading aliens from outer space or when you’d get a little Italian plumber to jump on a turtle’s head, gaming has developed into one of the most frequently inappropriate and controversial artistic mediums on the planet. 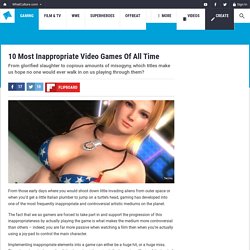 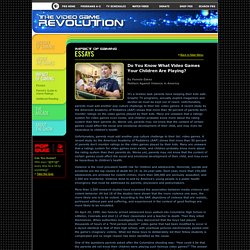 By Pamela Eakes Mothers Against Violence in America It's a tireless task parents have keeping their kids safe. Graphic TV programs, sexually explicit magazines and alcohol all must be kept out of reach. Unfortunately, parents must add another pop culture challenge to their list: video games. A recent study by the American Academy of Pediatrics (AAP) shows that more than 90 percent of parents don't monitor ratings on the video games played by their kids.

Unfortunately, parents must add another pop culture challenge to their list: video games. Violence is the most prevalent health risk for children and adolescents. More than 3,500 research studies have examined the association between media violence and violent behavior. On April 20, 1999, two heavily armed adolescent boys walked into Columbine High School in Littleton, Colorado and shot 12 of their classmates and a teacher to death. Become a Game Smart Parent at www.gamesmart.org. Children and Violent Video Games. Children and Violent Video Games More and more kids are playing video and computer games — especially ultra-violent ones that are top sellers. 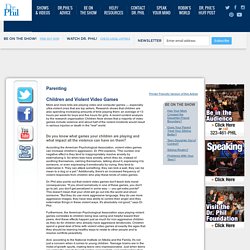 Research shows that children are also spending increasing amounts of time playing them: an average of 13 hours per week for boys and five hours for girls. A recent content analysis by the research organization Children Now shows that a majority of video games include violence and about half of the violent incidents would result in serious injuries or death in the "real" world. Do you know what games your children are playing and what impact all the violence can have on them? According the American Psychological Association, violent video games can increase children's aggression. Dr. Furthermore, the American Psychological Association says playing violent games correlates to children being less caring and helpful toward their peers. How can parents minimize any potential harm? Kids, Parents, and Video Games. 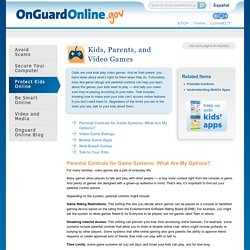 And as their parent, you have ideas about what’s right for them when they do. Fortunately, tools like game ratings and parental controls can help you learn about the games your kids want to play — and help you make sure they’re playing according to your rules. That includes knowing how to make sure your kids can’t access online features if you don’t want them to. Regardless of the limits you set or the tools you use, talk to your kids about them. The Concerns About Video Games. Video game playing is nearly universal among children and teens: more than 80 per cent of Canadians ages 6 to 17 say they play games regularly. [2] As the audience for games grows, however, children make up a smaller part of that audience, and more and more of the most popular games are rated “M” (intended for adults 17 years or older). 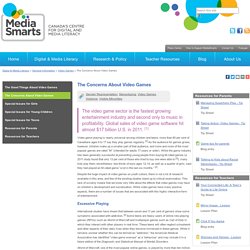 While the game industry has been generally successful at preventing young people from buying M-rated games (a 2011 study found that only 13 per cent of those who tried to buy one were able to [3]), many kids play them nevertheless: two-thirds of boys ages 12-14, as well as a quarter of girls, said they had played an M-rated game “a lot in the last six months.” [4] Despite the huge impact of video games on youth culture, there is not a lot of research available in this area, and few of the existing studies stand up to critical examination. Television's Impact on Kids. How much impact TV has on children depends on many factors: how much they watch, their age and personality, whether they watch alone or with adults, and whether their parents talk with them about what they see on TV. 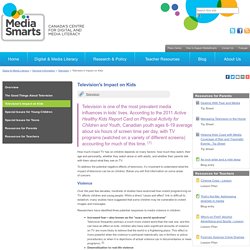 To address the potential negative effects of television, it’s important to understand what the impact of television can be on children. Below you will find information on some areas of concern. Violence Over the past few decades, hundreds of studies have examined how violent programming on TV affects children and young people. While a direct “cause and effect” link is difficult to establish, many studies have suggested that some children may be vulnerable to violent images and messages. Researchers have identified three potential responses to media violence in children: See the section Violence for more details. Effects on healthy child development Sexual content [1] Active Healthy Kids Canada (2011) Don’t Let This Be The Most Physical Activity Our Kids Get After School. 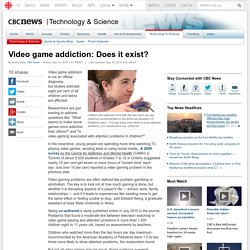 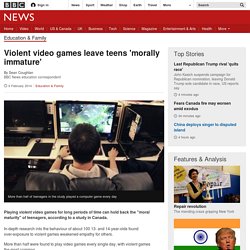 In-depth research into the behaviour of about 100 13- and 14-year-olds found over-exposure to violent games weakened empathy for others. Violence and video games. By Lawrence Kutner, and Cheryl K. 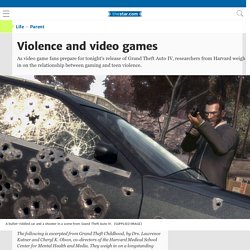 OlsonSpecial to the Star Wed., Dec. 31, 1969 The following is excerpted from Grand Theft Childhood, by Drs. Lawrence Kutner and Cheryl K. Olson, co-directors of the Harvard Medical School Center for Mental Health and Media. Thirteen-year-old Darren and a half dozen of his video game-playing friends are sitting around a table at the Boys and Girls Club in a working-class section of Boston.

Darren had a tough time in school earlier this week. If you listen to the politicians and the pundits, the relationship is blindingly clear: playing violent video games leads children to engage in real-world violence or, at the very least, to become more aggressive. Family Matters: Youth and Video Games. Encouraging Positive Youth Video Game Activities - UF/IFAS Extension: Solutions for Your Life. 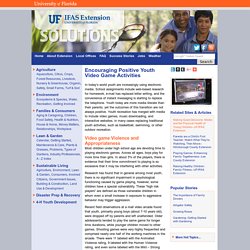 School assignments include web-based research for homework, e-mail has replaced letter writing, and the convenience of instant messaging is starting to replace the telephone. Youth today are more media literate than their parents, yet the outcomes of this transition are not always positive. Youth recreation has merged with media to include video games, music downloading, and interactive websites, in many cases replacing traditional youth activities, such as basketball, swimming, or other outdoor recreation. Violence%20and%20Video%20GamingIV. Video Game Addiction - Internet Gaming Addiction. By Emily Battaglia A recent article published in the journal Psychological Science indicates that youth in the United States may be at risk for addiction to video games. Do Video Games Promote Positive Youth Development? Active Healthy Kids Canada's Position on Active Video Games for Children and Youth.