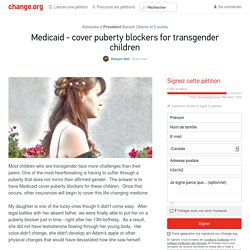 One of the most heartbreaking is having to suffer through a puberty that does not mirror their affirmed gender. The answer is to have Medicaid cover puberty blockers for these children. Once that occurs, other insurances will begin to cover this life-changing medicine. My daughter is one of the lucky ones though it didn't come easy. After legal battles with her absent father, we were finally able to put her on a puberty blocker just in time - right after her 13th birthday. Because she didn't have to spend as much energy on hating her body (though she still hates her genitals), she has been able to concentrate on school - putting her consistently on the honor roll all through middle school and now through her junior year in high school. More than 50% of Transgender youth will have had at least one suicide attempt by their 20th birthday. Girl Scouts welcomes transgender girls. 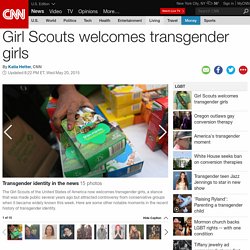 "It conforms with our continuous commitment to inclusivity. " The Girl Scouts' guidance on serving transgender girls, on its "Frequently Asked Questions" page, was actually made public four years ago. "Placement of transgender youth is handled on a case-by-case basis, with the welfare and best interests of the child and the members of the troop/group in question a top priority," states the FAQ. Portraits Of Transgender Children Reveal “The Person They Feel They Really Are" Trans Student Educational Resources. Can Jewish Transgender Teen's Successful Coming Out Provide Model for Others? 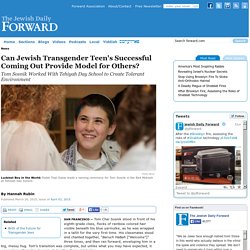 By Hannah Rubin Published March 26, 2015, issue of April 03, 2015. San Francisco — Tom Chai Sosnik stood in front of his eighth-grade class, flecks of rainbow colored hair visible beneath his blue yarmulke, as he was wrapped in a tallit for the very first time. California Jewish school marks 8th grader's gender transition. Earlier this month, 13-year-old Tom Sosnik, wearing a tallit and holding a kiddush cup, marked a transition into manhood with a special ceremony at his Jewish day school. 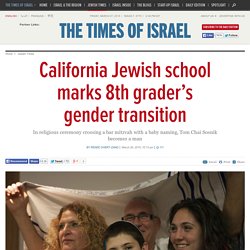 He wasn’t celebrating receiving a first prayer book or a first Bible, or graduating from one grade to another. He wasn’t really observing his bar mitzvah, either. In what was a decidedly nontraditional event, the short-haired teenager was publicly marking his gender transition from girl to boy. Get The Times of Israel's Daily Edition by email and never miss our top stories Free Sign up! Sosnik’s Jewish ritualized coming out as transgender in front of classmates, teachers and family at the Tehiyah Day School in El Cerrito, California, is believed to be the first time that a Jewish day school has sanctioned and performed such a ceremony.

“It’s been really more of a big deal than I thought it would be,” Sosnik told The Times of Israel by phone during a break between classes. “He’s just started his journey. One Teenager’s Female-To-Male Story: Going Through Puberty Twice. Dr. 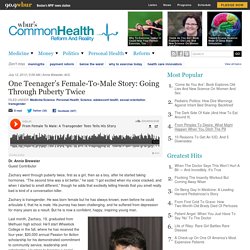 Annie Brewster Guest Contributor Zachary went through puberty twice, first as a girl, then as a boy, after he started taking hormones. “The second time was a lot better,” he said. “I got excited when my voice cracked, and when I started to smell different,” though he adds that excitedly telling friends that you smell really bad is kind of a conversation killer.

Zachary is transgender. Transgender People. Listen If you are a guy, you usually don't think about it much. 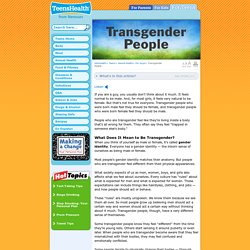 It feels normal to be male. And, for most girls, it feels very natural to be female. But that's not true for everyone. For Youth — Trans Youth Equality Foundation. Call Him Hunter. We are a group of moms who have come together because we have a transgender child. 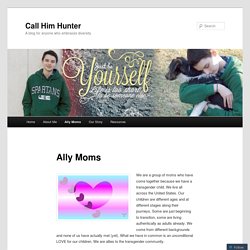 We live all across the United States. Our children are different ages and at different stages along their journeys. Some are just beginning to transition, some are living authentically as adults already. We come from different backgrounds and none of us have actually met (yet). What we have in common is an unconditional LOVE for our children. Many of you out there do not have the support you so richly deserve. Here are the guidelines for reaching out to an Ally Mom: If you are experiencing a true emergency, please CALL 911 or go to your nearest emergency room. Text one of us before calling; identify who you are and use the phrase “Ally Mom” so we know the nature of the call. You will get a text or call back. If you don’t get a call back within the hour, feel free to try another Ally Mom. Remember, we are not therapists, medical doctors or trained crisis counselors.

Transgender teen's acceptance an act of love for family. DETROIT — Roz Keith's first inkling that her youngest child, the one who never liked frilly dresses or girly things, might be different came about eight years ago. 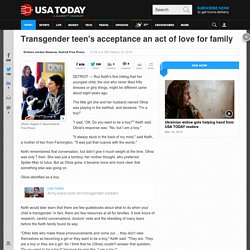 The little girl she and her husband named Olivia was playing in the bathtub, and declared: "I'm a boy! " "I said, 'OK. Do you want to be a boy? '" Keith said. Olivia's response was: "No, but I am a boy. " "It always stuck in the back of my mind," said Keith, a mother of two from Farmington. Keith remembered that conversation, but didn't give it much weight at the time. Growing Need Prompts Maine Med to Open Gender Clinic. Patty Wight reports on Maine Medical Center's new Gender Clinic at the Barbara Bush Children's Hospital. 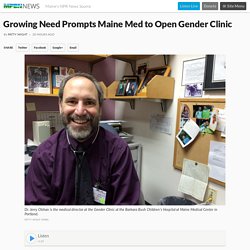 PORTLAND, Maine - As of this year, the Barbara Bush Children's Hospital at Maine Medical Center officially has a gender clinic. Though the hospital has treated transgender youth for several years, the number of patients is growing, from just four patients in 2010 to now more than 50. And the new clinic is expected to fill a growing need. Fourteen years ago, Jen and Tom - who don't want to use their last name - adopted twin baby boys from Cambodia.

And they noticed very early on that one of them was about as stereotypical a boy as you could get. But the other - whose name was Ted - was much more feminine. Study: Transgender youth aren’t confused about their gender identity. Brennan Linsley, AP (File)In this 2013 file photo, Coy Mathis (left), a 6-year-old transgender girl, plays with her sister, Auri, 2, center, at their home in Fountain, Colo. 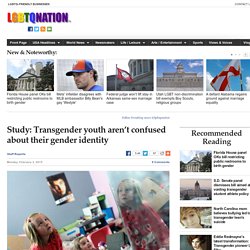