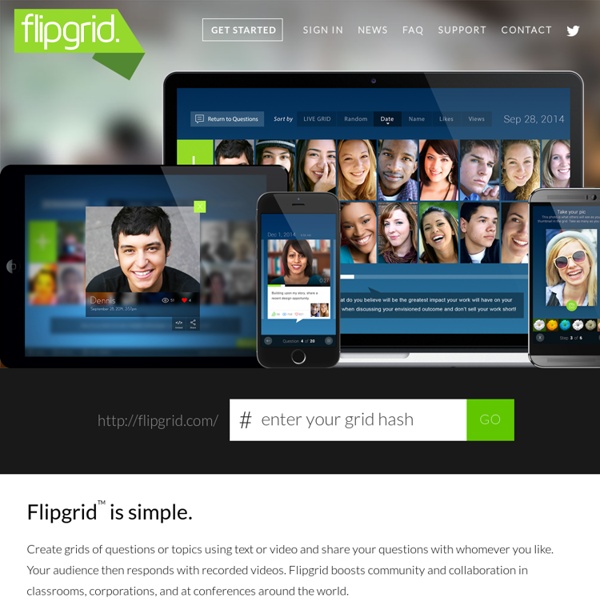 The website located at flipgrid.com and the mobile application called “Flipgrid” (the "App" and, together with the website, the "Site") and the services offered through the Site (the "Services") are copyrighted works belonging to Vidku, Inc. ("Flipgrid", "us", "our", and "we"). Certain features of the Site or Services may be subject to additional guidelines, terms, or rules, which will be posted on the Site or Services in connection with such features. All such additional terms, guidelines, and rules are incorporated by reference into these Terms. In the event of a conflict between the additional terms and any provision in these Terms, the additional terms will prevail, but only with respect to the Service to which the additional terms apply. 1.1. 1.2. 1.3. 1.4. (a) School User acknowledges receipt of Flipgrid’s Privacy Policy and Children’s Privacy Policy describing our practices regarding the collection, use, and disclosure of personal information. (c) FERPA. 1.5. 2.1. 2.2. 2.3. 2.4.

MCP Photoshop Actions and Tutorials Blog for Photographers September 01, 2009 | 6 Comments |Add a comment As photographers there are times where we want blurred background and beautiful background separation. But other times stopping speed is our primary concern. Rethinking the Way College Students Are Taught It's a typical scene: a few minutes before 11:00 on a Tuesday morning and about 200 sleepy-looking college students are taking their seats in a large lecture hall - chatting, laughing, calling out to each other across the aisles. Class begins with a big "shhhh" from the instructor. This is an introductory chemistry class at a state university. For the next hour and 15 minutes, the instructor will lecture and the students will take notes. By the end of class, the three large blackboards at the front of the room will be covered with equations and formulas. Students in this class say the instructor is one of the best lecturers in the department.

"Deeper Learning" Improves Student Outcomes. But What Is It? The pressure is on teachers this year. Students are preparing to be tested on the new, tougher Common Core State Standards in over 40 states where, in many cases, teachers will be evaluated on the outcome. But a new report published by the American Institutes for Research (AIR) has identified a school reform with proven results in boosting student achievement, and not only on tests. 8 important TV shows that were lost or destroyed One TV network dumped its entire collection into the sea. Image: NBC It took a while for networks and studios to fine-tune how to preserve the television shows they produced. Before Lucille Ball and Desi Arnaz introduced the idea of filming television shows on film, studios broadcast the episodes live or on low-quality kinescopes. The primitive method for broadcasting meant a lot of early shows didn't make it past the 1950s. However, that wasn't the only reason certain shows were lost over time.

4 Lead Gen Campaign Ideas (+ the Landing Page Templates to Power Them) All right, so you launched your most recent marketing campaign, promoted it with an eagerness you didn’t know you had, and juuuust as you’re unwrapping your celebratory Snickers bar at your desk, lead gen Greg appears to ask when you can crank out the next one. …The next campaign that is. He’s not interested in your Snickers bar. Every month, you can scramble to pull together a marketing campaign to fill your pipeline with leads, but I think you’ll agree it’s high time you stop winging it. Achieving Better Focus and Sharpness in Your Images Twice a month we revisit some of our reader favorite posts from throughout the history of Phototuts+. This tutorial was first published in October, 2009. The most common complaints I hear from most photographers of any experience level is "my images aren't sharp", and "I can't get my focus to lock". Most want to blame their equipment and, while there are many instances that equipment is to blame, I have found a vast majority are just simple user error.

American Modeling Teachers Association The Modeling Method has been developed to correct many weaknesses of the traditional lecture-demonstration method, including the fragmentation of knowledge, student passivity, and the persistence of naive beliefs about the physical world. Coherent Instructional Objectives Student-Centered Instructional Design Instruction is organized into modeling cycles which move students through all phases of model development, evaluation and application in concrete situations — thus promoting an integrated understanding of modeling processes and acquisition of coordinated modeling skills.The teacher sets the stage for student activities, typically with a demonstration and class discussion to establish common understanding of a question to be asked of nature.

Habits of Very Successful Innovators The biggest misconception about success is that what you did yesterday will help you succeed tomorrow. To stay on top of your game, your business, and your leadership, you need to keep innovating. To continue innovating you have to keep learning, thinking, questioning, exploring, experimenting, associating, and intersecting ideas. Develop these habits to become more innovative: