Hitler Youth Homework Dec 2016. Hitler's Children WATCH ME. Website 1 (Nice and helpful) The Hitler Youth. In the early 1920s, the Nazi party had established a youth movement led by Kurt Gruber, with the aim of attracting young men who could be trained to become members of the SA (Stormtroopers). 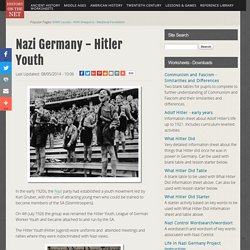 On 4th July 1926 the group was renamed the Hitler Youth, League of German Worker Youth and became attached to and run by the SA. The Hitler Youth (Hitler Jugend) wore uniforms and attended meetings and rallies where they were indoctrinated with Nazi views. Adolf Hitler believed that the support of the youth was vital to the future of the third Reich and aimed, through the Hitler Youth programme, to produce a generation of loyal supporters of Nazi views. Posters were used to attract more members and membership rose from 5,000 in 1925 to 25,000 in 1930.

When the Nazis came to power in 1933 other youth groups were forcibly merged into the Hitler Youth and by the end of 1933 membership stood at just over 2 million. Website 2 (Challenging) The Hitler Youth. Shaping the Future: Indoctrinating Youth “These boys and girls enter our organizations [at] ten years of age, and often for the first time get a little fresh air; after four years of the Young Folk they go on to the Hitler Youth, where we have them for another four years . . . 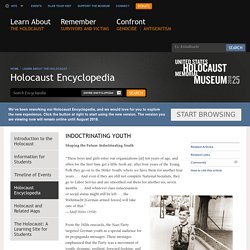 And even if they are still not complete National Socialists, they go to Labor Service and are smoothed out there for another six, seven months . . . And whatever class consciousness or social status might still be left . . . the Wehrmacht [German armed forces] will take care of that.” —Adolf Hitler (1938) From the 1920s onwards, the Nazi Party targeted German youth as a special audience for its propaganda messages.