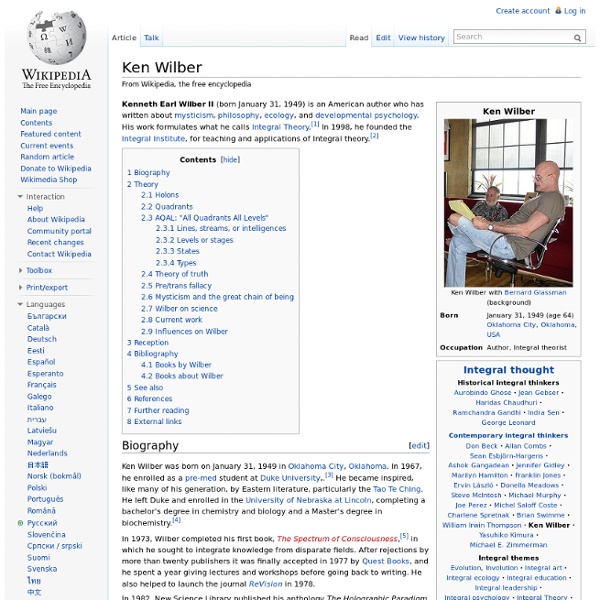 Kenneth Earl "Ken" Wilber II (born January 31, 1949, in Oklahoma City, Oklahoma) is an American writer and public speaker. He has written and lectured about mysticism, philosophy, ecology, and developmental psychology. His work formulates what he calls Integral Theory.[1] In 1998 he founded the Integral Institute.[2] Biography[edit] Wilber was born in 1949 in Oklahoma City. In 1967 he enrolled as a pre-med student at Duke University.[3] He became inspired, like many of his generation, by Eastern literature, particularly the Tao Te Ching. In 1973 Wilber completed his first book, The Spectrum of Consciousness,[5] in which he sought to integrate knowledge from disparate fields. In 1982 New Science Library published his anthology The Holographic Paradigm and other Paradoxes[6] a collection of essays and interviews, including one by David Bohm. In 1983 Wilber married Terry "Treya" Killam who was shortly thereafter diagnosed with breast cancer. Theory[edit] Holons[edit] Quadrants[edit]

Integral theory Integral theory, a philosophy with origins in the work of Sri Aurobindo and Jean Gebser, and promoted by Ken Wilber, seeks a synthesis of the best of pre-modern, modern, and postmodern reality.[1] It is portrayed as a "theory of everything,"[2] and offers an approach "to draw together an already existing number of separate paradigms into an interrelated network of approaches that are mutually enriching."[1] It has been applied by scholar-practitioners in 35 distinct academic and professional domains as varied as organizational management and art.[1] Methodologies[edit] AQAL, pronounced "ah-qwul," is a widely used framework in Integral Theory. It is also alternatively called the Integral Operating System (IOS) or by various other synonyms.

Judea Pearl Judea Pearl (born 1936) is an Israeli-born American computer scientist and philosopher, best known for championing the probabilistic approach to artificial intelligence and the development of Bayesian networks (see the article on belief propagation). He is also credited for developing a theory of causal and counterfactual inference based on structural models (see article on causality). He is the 2011 winner of the ACM Turing Award, the highest distinction in computer science, "for fundamental contributions to artificial intelligence through the development of a calculus for probabilistic and causal reasoning".[1][2][3][4]

Mind in Life: Amazon.co.uk: Evan Thompson Evan Thompson draws from the disciplines of biology, philosophy, psychology, and neuroscience to bring about a wide and varied discussion of one of the most significant philosophical questions or our time called the explanatory gap--the gap between our subjective experience and the laws of nature. "Exactly how are consciousness and subjective experience related to the brain and the body?" How is it that our subjective experience of the world sets us apart from our environment, when our environment and life are intricately coupled? Thompson contends that there can be no dualistic separation between the organizational properties of life and mind. In fact, Thompson says in the preface: "...the self-organizing features of mind are an enriched version of the self-organizing features of life."

Humanistic psychology Humanistic psychology is a psychological perspective which rose to prominence in the mid-20th century in response to the limitations of Sigmund Freud's psychoanalytic theory and B.F. Skinner's behaviorism.[1] With its roots running from Socrates through the Renaissance, this approach emphasizes individuals inherent drive towards self-actualization and creativity. It typically holds that people are inherently good. It adopts a holistic approach to human existence and pays special attention to such phenomena as creativity, free will, and human potential.

TRIZ TRIZ (/ˈtriːz/; Russian: теория решения изобретательских задач, teoriya resheniya izobretatelskikh zadatch) is "a problem-solving, analysis and forecasting tool derived from the study of patterns of invention in the global patent literature".[1] It was developed by the Soviet inventor and science fiction author Genrich Altshuller and his colleagues, beginning in 1946. In English the name is typically rendered as "the theory of inventive problem solving",[2][3] and occasionally goes by the English acronym TIPS. Following Altshuller's insight, the theory developed on a foundation of extensive research covering hundreds of thousands of inventions across many different fields to produce a theory which defines generalisable patterns in the nature of inventive solutions and the distinguishing characteristics of the problems that these inventions have overcome.

Hundredth monkey effect The hundredth monkey effect is a studied phenomenon[1] in which a new behavior or idea is claimed to spread rapidly by unexplained, even supernatural, means from one group to all related groups once a critical number of members of one group exhibit the new behavior or acknowledge the new idea. The theory behind this phenomenon originated with Lawrence Blair and Lyall Watson in the mid-to-late 1970s, who claimed that it was the observation of Japanese scientists. One of the primary factors in the promulgation of the story is that many authors quote secondary, tertiary or post-tertiary sources who have themselves misrepresented the original observations.[1] Popularisation of the effect[edit] The story of the hundredth monkey effect was published in Lyall Watson's foreword to Lawrence Blair's Rhythms of Vision in 1975,[2] and spread with the appearance of Watson's 1979 book Lifetide.

Human Potential Movement The Human Potential Movement (HPM) arose out of the milieu of the 1960s and formed around the concept of cultivating extraordinary potential that its advocates believed to lie largely untapped in all people. The movement took as its premise the belief that through the development of "human potential", humans can experience an exceptional quality of life filled with happiness, creativity, and fulfillment. As a corollary, those who begin to unleash this assumed potential often find themselves directing their actions within society towards assisting others to release their potential. Adherents believe that the net effect of individuals cultivating their potential will bring about positive social change at large. Roots[edit]

Peter Fenwick (neuropsychologist) Peter Brooke Cadogan Fenwick (born 25 May 1935) is a neuropsychiatrist and neurophysiologist who is known for his studies of epilepsy and end-of-life phenomena. Fenwick is a graduate of Trinity College, Cambridge,[1] where he studied Natural Science. He obtained his clinical experience at St Thomas' Hospital.[2] Male gaze The male gaze is a concept coined by feminist film critic Laura Mulvey. It refers to the way visual arts are structured around a masculine viewer. It describes the tendency in visual culture to depict the world and women from a masculine point of view and in terms of men's attitudes.[1][2] The male gaze consists of three different gazes:[3][4] that of the person behind the camera,that of the characters within the representation or film itself, andthat of the spectator.