Facing Gaia: A New Enquiry Into Natural Religion - The Gifford Lectures. There could be no better theme for a lecture series on natural religion than that of Gaia, this puzzling figure that has emerged recently in public discourse from Earth science as well as from many activist and spiritual movements. 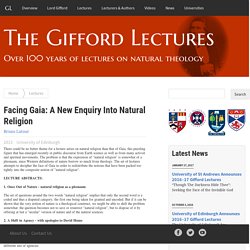 The problem is that the expression of ''natural religion'' is somewhat of a pleonasm, since Western definitions of nature borrow so much from theology. The set of lectures attempts to decipher the face of Gaia in order to redistribute the notions that have been packed too tightly into the composite notion of ''natural religion''. 1. Lines of flight: Deleuze and nomadic creativity – Philosophy for change. ‘I am not a number – I am a free man!’ 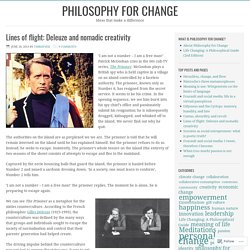 Patrick McGoohan cries in the 60s cult-TV series, The Prisoner. McGoohan plays a British spy who is held captive in a village on an island controlled by a faceless authority. The prisoner, known only as Number 6, has resigned from the secret service. It seems to be his crime. In the opening sequence, we see him burst into his spy chief’s office and passionately submit his resignation; he is subsequently drugged, kidnapped, and whisked off to the island. 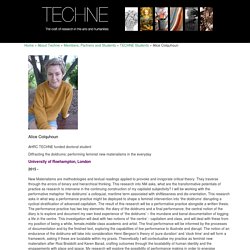 They traverse through the errors of binary and hierarchical thinking. This research into NM asks, what are the transformative potentials of practice as research to intervene in the continuing construction of my capitalist subjectivity? I will be working with the performative metaphor ‘the doldrums’ a colloquial, maritime term associated with shiftlessness and dis-orientation. Introduction. Postmodernisms: Theories and Analyses of Architecture II. They are ‘alive’. 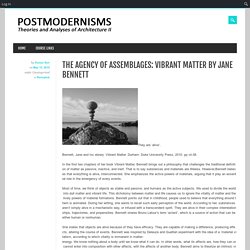 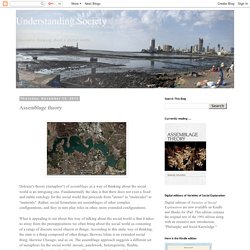 Of assemblage as a way of thinking about the social world is an intriguing one. Fundamentally the idea is that there does not exist a fixed and stable ontology for the social world that proceeds from "atoms" to "molecules" to "materials". What Is a People? This collection of essays will be of interest to those engaged with the contemporary problem of how to conceive the reinvigoration of the political imagination. 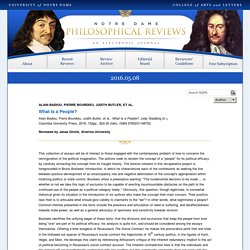 The authors seek to reclaim the concept of a "people" for its political efficacy by carefully extracting the concept from its fraught history. The tension inherent in this recuperative project is foregrounded in Bruno Bosteels' introduction, in which he characterizes each of the contributors as walking the line between positive development of an emancipatory role and negative delimitation of the concept's appropriation within totalizing politics or state control. Latour on Earth, Brexit and Sensitivity. Latour on Earth, Brexit and Sensitivity Finally catching Latour in the flesh for PSi22 was as thrilling as I’d expected. 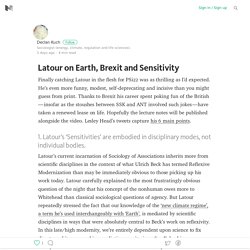 He’s even more funny, modest, self-deprecating and incisive than you might guess from print. Thanks to Brexit his career spent poking fun of the British — insofar as the stoushes between SSK and ANT involved such jokes — have taken a renewed lease on life. Hopefully the lecture notes will be published alongside the video. Lesley Head’s tweets capture his 6 main points. 1. About – Reprising the Political Theology of Bruno Latour. Theology, unfortunately, has been for a long time in the same dire state where epistemology and aesthetics were before the onslaught of constructivism […] thus, its most essential phenomenon, its own original type of mediation, its very core, is defined in the exact terms of another one that goes in completely different directions and produces utterly different objects and subjects. 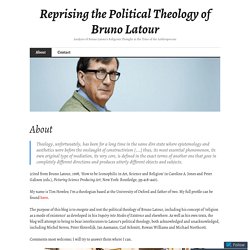 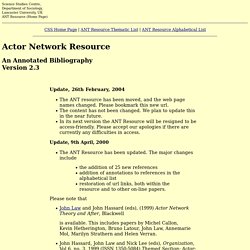 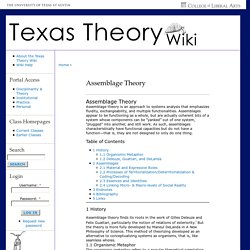 Assemblages appear to be functioning as a whole, but are actually coherent bits of a system whose components can be “yanked” out of one system, “plugged” into another, and still work. As such, assemblages characteristically have functional capacities but do not have a function—that is, they are not designed to only do one thing. Table of Contents 1 History. Bruno Latour. Bruno Latour (French: [latuʁ]; born 22 June 1947) is a French philosopher, anthropologist and sociologist of science.[1] He is especially known for his work in the field of Science and Technology Studies (STS).[2] After teaching at the École des Mines de Paris (Centre de Sociologie de l'Innovation) from 1982 to 2006, he is now Professor at Sciences Po Paris (2006),[3] where he is the scientific director of the Sciences Po Medialab. He is also a Centennial Professor at the London School of Economics.[4] Latour's monographs earned him a 10th place among most-cited book authors in the humanities and social sciences for the year 2007.[6] Biography[edit] As a student, Latour originally focused on philosophy and was deeply influenced by Michel Serres.

After spending more than 20 years at the Centre de sociologie de l'innovation at the École des Mines in Paris, Latour moved in 2006 to Sciences Po, where he is the first occupant of a Chair named for Gabriel Tarde. Actor–network theory. Broadly speaking, ANT is a constructivist approach in that it avoids essentialist explanations of events or innovations (i.e. ANT explains a successful theory by understanding the combinations and interactions of elements that make it successful, rather than saying it is true and the others are false). Likewise, it is not a cohesive theory in itself.