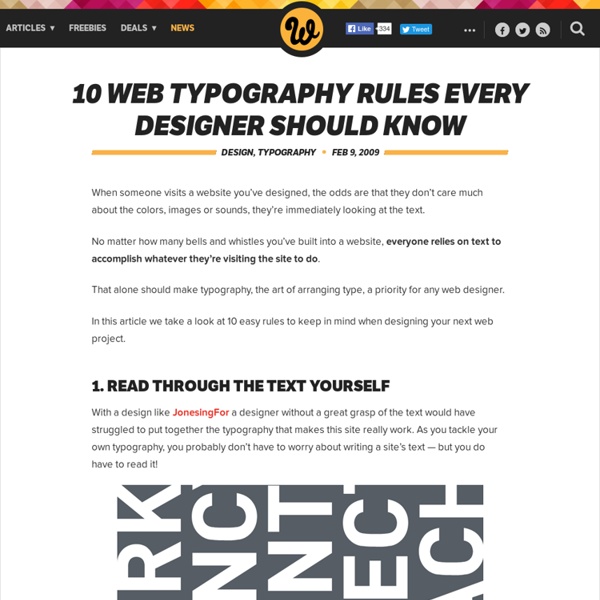 When someone visits a website you’ve designed, the odds are that they don’t care much about the colors, images or sounds, they’re immediately looking at the text. No matter how many bells and whistles you’ve built into a website, everyone relies on text to accomplish whatever they’re visiting the site to do. That alone should make typography, the art of arranging type, a priority for any web designer. In this article we take a look at 10 easy rules to keep in mind when designing your next web project. 1. With a design like JonesingFor a designer without a great grasp of the text would have struggled to put together the typography that makes this site really work. Some web designers think that just copying and pasting out of a text file constitutes the total of their textual duties. You can kick your typography up yet another notch, if you can read through the text once it’s in place in your design. 2. 3. 4. 5. 6. 7. 8. 9. 10. It’s not possible to entirely avoid serifs, of course. Related:  web design theory • CSS

Basics Behind Color Theory for Web Designer As a collective digital artist, it is important to understand the fundamental science behind color theory. It’s a popular topic with a vast spread of information to retain and digest. Not only does this topic focus on arts and design, it also involve jist of optics science. (Image source: Shutterstock) There is plenty to cover on this topic so we’ll be glossing over some of the key points to extract what should be emphasize. Beginnings of Color Theory When starting off into the pool of colors, we should base ourselves in square one. These primary colors may be combined together in a mixing process to create other color scheme. Tertiary Color Pallet Once we have our color wheel started we can use these resources to create tertiary colors. Next we’ll be going over some of the most popular color schemes. Monochromatic Colors When delving into color schemes we can find an endless supply of creativity. Monochromatic color schemes are the raw colors as they only refer to a single hue. Conclusion

Themes & templates - Page 1 - Price (high) About Bootstrap Bootstrap is designed to help people of all skill levels – designer or developer, huge nerd or early beginner. Use it as a complete kit or use it to start something more complex. Unlike other front-end toolkits, Bootstrap was designed first and foremost as a styleguide to document not only its features, but best practices and living, coded examples. Built to support new HTML5 elements and syntax with progressively enhanced components. Browser support Bootstrap is tested and supported in major modern browsers like Chrome, Firefox, and Internet Explorer. Typechart - Browse Web Type, Grab CSS.

Visual & Graphic Design You’ve heard you can’t judge a book by its cover. But the truth is, if a book doesn’t have a good cover, most people won’t even reach for it. The same can be said about elearning. Good visual design compels the learner to go deeper and learn more; and it reassures them the course is valuable and worth their time. The course’s visual design is a powerful tool for setting the tone, communicating key concepts, and engaging your audience. In the posts below, you’ll learn some visual design basics that make for more effective communication. Communicate with Good Visual Design Graphic Design for Your E-Learning Courses Resources to Help You Build Better Graphics

Visual Design Some foundational ideas are so thoroughly ingrained in modern life that we hardly see them for their ubiquity and familiarity. The concept of “module and program”—regular building blocks of repeating patterns that when joined together produce an organized whole—permeates our information-age lives even more thoroughly than it did the lives of our ancestors in the industrial revolution launched by manufacturing innovators like Eli Whitney. As the industrial world grew more complex, document designers in the mid-1800s began to adapt modular programs to newspaper, catalog, financial, and other publications, and modern page layout was born. In the early twentieth century the Bauhaus designers adopted the elements of visual logic discovered by the Gestalt perceptual psychologists, and those German and Swiss designers created modern graphic design (see Visual Design Principles sidebar, below). The primary purposes of graphic design are to: Consistency Contrast Color and contrast in typography Style

Bootswatch: Free themes for Bootstrap Thinking With Type Proportion, Golden Ratio and Rule of Thirds One of the key principles of design for web designers proportion, as it is applicable at the macro-level (the general layout of the page) and the micro-level (e.g. a single diagram or widget). Proportion refers the size relationship of visual elements to each other and to the whole. In art this principle has been examined for hundreds of years, and one timeless proportional relationship that occurs frequently for positive effect in design is the Golden mean or Golden ratio. The Golden Ratio Ratio refers to how one measurement relates to another, and the ratio formed of 1:1.618 is called the Golden mean - the ratio of bc to ab is the same as ab to ad. It may be that humans are genetically programmed to recognize the ratio in the Golden mean as being pleasing. The golden ratio can be seen in many ancient architectural designs, including the Parthenon. Golden mean grid applied to a landscape Rule of Thirds One can analyze photographs and designs by laying down grids. For more information,

The designer's guide to grid theory Grids are like the invisible glue that holds a design together, so whether you work in print or on the web you need to understand grid theory. There's been a resurgence in the popularity of the grid in recent times. This has come about as the web has matured into a more capable design platform, and web designers (and developers) have created reusable CSS libraries and frameworks to simplify the process of deploying and leveraging grids to create balanced page layouts. Guide to the grid We're here to set that straight with this simple pocket-sized guide to the grid, including a small smattering of theory! So whether you're a traditionally-taught designer or just finding your way without any formal training, we'll help you out with the basic terminology, practice and purpose of the grid. 01. The foremost purpose of a grid, in graphic design at least, is to establish a set of guidelines for how elements should be positioned within a layout. 02. 03. 04. 960 grid systems on the web 05. 06.

CSS Get the lowdown on the key pieces of Bootstrap's infrastructure, including our approach to better, faster, stronger web development. HTML5 doctype Bootstrap makes use of certain HTML elements and CSS properties that require the use of the HTML5 doctype. <! Mobile first With Bootstrap 2, we added optional mobile friendly styles for key aspects of the framework. To ensure proper rendering and touch zooming, add the viewport meta tag to your <head>. You can disable zooming capabilities on mobile devices by adding user-scalable=no to the viewport meta tag. Bootstrap sets basic global display, typography, and link styles. Set background-color: #fff; on the body Use the @font-family-base, @font-size-base, and @line-height-base attributes as our typographic base Set the global link color via @link-color and apply link underlines only on :hover These styles can be found within scaffolding.less. Normalize.css Containers Use .container for a responsive fixed width container. <div class="container"> ... <!

Web Typography | an introduction to font families, font choices and HTML punctuation || HTMLSource ] Path // → → WEB TYPOGRAPHY The fonts you use for your website are an important decision, as they will often reflect your site’s tone and affect its visual impact. Typography is an interesting field if you can appreciate the skills that go into the design of a typeface. Below is an introduction to typography, starting with font classifications and then going into the practicalities of online text. This page was last updated on 2012-08-21 Font Families All fonts fall into a distinct category of fonts, called families. Serif fonts Serif fonts are the old-style, or traditional-looking fonts. Serif fonts are more suitable for usage in offline, high-resolution printed media like books and newspapers, where their extra definition makes them more readable. Examples of serif fonts are Times New Roman, Georgia, Book Antiqua, Palatino and Garamond. Slab-serif fonts Slab-serif fonts are a subclass of serif fonts. Sans-serif fonts Character Proportions Other Families Font Variations Punctuation in HTML

11 Reasons for White Space + Freebies and Tutorials Graphic designing is an avenue for one’s creativity. It is a creative process which may be called as visual communication through the use of typography, visual art, layouting techniques and others. This involves logo designing, advertisements, publications like magazines, product labels, business cards and web designing. In this genre, there is oftentimes a communication between a client and the designer. Oftentimes, white spaces are overlooked. There are two types of white spaces. 1.Active White Space: Space intentionally left blank for a better structure and layout. Most people would consider white space as merely a waste of printing materials which makes them opt to have a full-colored page thinking that printing with begative spaces will just squander their money. 1.It Signifies Space for More Creativity. 2.White Spaces Attract the Eyes. Effective use of white space in an advertisement.View Source 3.There is Always a Positive Response Towards a White Space. A layout in full page.