Big Bang - 60 Seconds. What is the Big Bang. The Universe begins in a sudden mysterious event called the Big Bang. 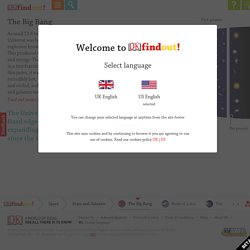 We don’t know what caused it to happen. The energy of the new-born Universe creates matter. At first, the matter exists as particles and antiparticles. They destroy each other and turn back into energy. But some of the matter is left over. After 380,000 years the Universe has cooled enough for atoms to form. After 500 million years the first galaxies have begun to form. Within a tiny fraction of a second the Universe expands in size from trillions of times smaller than an atom to the size of a city. The leftover particles begin to form protons and neutrons, the pieces that make up the centers of atoms. After 300 million years the first stars appear. The Universe as it is today is full of stars, galaxies, and planets. The Universe - Curriculum Center. An activity you can use in the classroom In the 1920s astronomer Edwin Hubble used the red shift of the spectra of stars to determine that the universe was expanding. 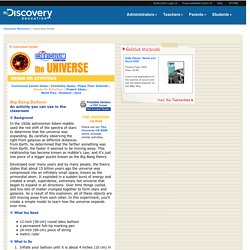 By carefully observing the light from galaxies at different distances from Earth, he determined that the farther something was from Earth, the faster it seemed to be moving away. This relationship has become known as Hubble's Law, and it's just one piece of a bigger puzzle known as the Big Bang theory. Developed over many years and by many people, the theory states that about 15 billion years ago the universe was compressed into an infinitely small space, known as the primordial atom. It exploded in a sudden burst of energy and created a small, superdense, extremely hot universe that began to expand in all directions. 12-inch (30-cm) round latex balloon a permanent felt-tip marking pen 24-inch (60-cm) piece of string metric ruler Inflate your balloon until it is about 4 inches (10 cm) in diameter, but do not tie the end.

Great Story Beads. Imagination in Search of Knowledge. Sometimes, as we get focused on learning all the skills I’m trying to teach: sounding out new words, adding bigger numbers, telling time, and so forth, I forget that one of the best ways to learn at this age is through imagination. 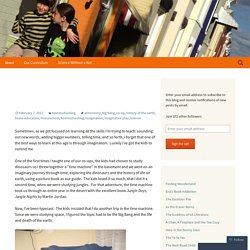 Luckily I’ve got the kids to remind me. One of the first times I taught one of our co-ops, the kids had chosen to study dinosaurs so I threw together a “time machine” in the basement and we went on an imaginary journey through time, exploring the dinosaurs and the history of life on earth, using a picture book as our guide. The kids loved it so much, that I did it a second time, when we were studying jungles.

For that adventure, the time machine took us through an entire year in the desert with the excellent book Jungle Days, Jungle Nights by Martin Jordan. Now, I’ve been typecast. Universe Time-line. The online homeschooling community has opened up a world of support and ideas for me. 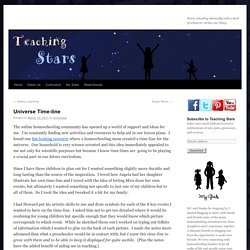 I’m constantly finding new activities and resources to help aid in our lesson plans. I found one fun looking resource where a homeschooling mom created a time-line for the universe. Our household is very science oriented and this idea immediately appealed to me not only for scientific purposes but because I know time-lines are going to be playing a crucial part in our future curriculum. Since I have three children to plan out for I wanted something slightly more durable and long-lasting than the source of the inspiration.

I loved how Angela had her daughter illustrate her own time-line and I toyed with the idea of letting Mira draw her own events, but ultimately I wanted something not specific to just one of my children but to all of them. I had Howard put his artistic skills to use and draw symbols for each of the 8 key events I wanted to have on the time-line. Last week was a bit different though. The Great Lessons. Teacher Preparation Setup The Beginning Follow Up Key Lessons Journal Suggestions. 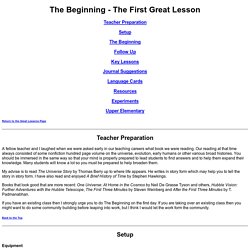