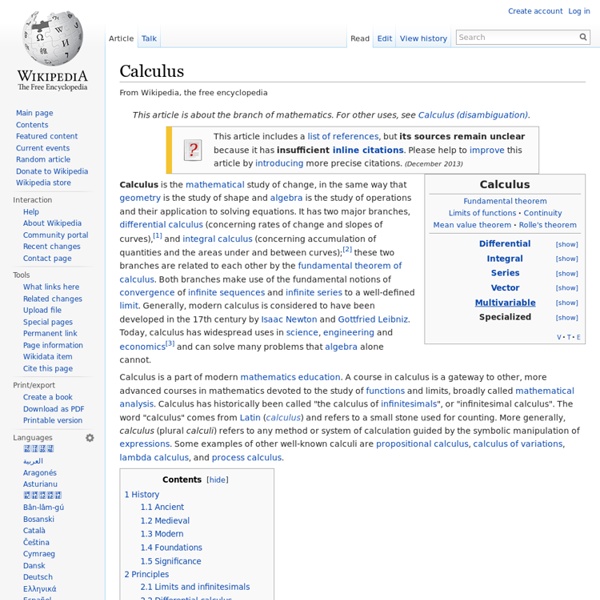 History[edit] Modern calculus was developed in 17th century Europe by Isaac Newton and Gottfried Wilhelm Leibniz (see the Leibniz–Newton calculus controversy), but elements of it have appeared in ancient Greece, China, medieval Europe, India, and the Middle East. Ancient[edit] The ancient period introduced some of the ideas that led to integral calculus, but does not seem to have developed these ideas in a rigorous and systematic way. Medieval[edit] Modern[edit] In Europe, the foundational work was a treatise due to Bonaventura Cavalieri, who argued that volumes and areas should be computed as the sums of the volumes and areas of infinitesimally thin cross-sections. These ideas were arranged into a true calculus of infinitesimals by Gottfried Wilhelm Leibniz, who was originally accused of plagiarism by Newton.[13] He is now regarded as an independent inventor of and contributor to calculus. Leibniz and Newton are usually both credited with the invention of calculus. Foundations[edit] Related:  System Theory

Dynamical system The Lorenz attractor arises in the study of the Lorenz Oscillator, a dynamical system. Overview[edit] Before the advent of computers, finding an orbit required sophisticated mathematical techniques and could be accomplished only for a small class of dynamical systems. Numerical methods implemented on electronic computing machines have simplified the task of determining the orbits of a dynamical system. For simple dynamical systems, knowing the trajectory is often sufficient, but most dynamical systems are too complicated to be understood in terms of individual trajectories. The difficulties arise because: The systems studied may only be known approximately—the parameters of the system may not be known precisely or terms may be missing from the equations. History[edit] Many people regard Henri Poincaré as the founder of dynamical systems.[3] Poincaré published two now classical monographs, "New Methods of Celestial Mechanics" (1892–1899) and "Lectures on Celestial Mechanics" (1905–1910). .

cal·cu·lus Feedback "...'feedback' exists between two parts when each affects the other. A feedback loop where all outputs of a process are available as causal inputs to that process "Simple causal reasoning about a feedback system is difficult because the first system influences the second and second system influences the first, leading to a circular argument. In this context, the term "feedback" has also been used as an abbreviation for: Feedback signal – the conveyance of information fed back from an output, or measurement, to an input, or effector, that affects the system.Feedback loop – the closed path made up of the system itself and the path that transmits the feedback about the system from its origin (for example, a sensor) to its destination (for example, an actuator).Negative feedback – the case where the fed-back information acts to control or regulate a system by opposing changes in the output or measurement. History[edit] Types[edit] Positive and negative feedback[edit] Terminology[edit]

State-space representation In control engineering, a state-space representation is a mathematical model of a physical system as a set of input, output and state variables related by first-order differential equations. "State space" refers to the space whose axes are the state variables. The state of the system can be represented as a vector within that space. To abstract from the number of inputs, outputs and states, these variables are expressed as vectors. Additionally, if the dynamical system is linear, time-invariant, and finite-dimensional, then the differential and algebraic equations may be written in matrix form.[1][2] The state-space representation (also known as the "time-domain approach") provides a convenient and compact way to model and analyze systems with multiple inputs and outputs. inputs and outputs, we would otherwise have to write down Laplace transforms to encode all the information about a system. State variables[edit] Linear systems[edit] inputs, outputs and where: is called the "state vector", ).

Homeostasis Homeostasis, also spelled homoeostasis (from Greek: ὅμοιος homœos, "similar" and στάσις stasis, "standing still"), is the property of a system in which variables are regulated so that internal conditions remain stable and relatively constant. Examples of homeostasis include the regulation of temperature and the balance between acidity and alkalinity (pH). It is a process that maintains the stability of the human body's internal environment in response to changes in external conditions. The concept was described by French physiologist Claude Bernard in 1865 and the word was coined by Walter Bradford Cannon in 1926.[1] Although the term was originally used to refer to processes within living organisms, it is frequently applied to automatic control systems such as thermostats. Homeostasis requires a sensor to detect changes in the condition to be regulated, an effector mechanism that can vary that condition; and a negative feedback connection between the two. Biological[edit] Biosphere[edit]

Systems theory Systems theory is the interdisciplinary study of systems in general, with the goal of elucidating principles that can be applied to all types of systems at all nesting levels in all fields of research.[citation needed] The term does not yet have a well-established, precise meaning, but systems theory can reasonably be considered a specialization of systems thinking; alternatively as a goal output of systems science and systems engineering, with an emphasis on generality useful across a broad range of systems (versus the particular models of individual fields). A central topic of systems theory is self-regulating systems, i.e. systems self-correcting through feedback. Self-regulating systems are found in nature, including the physiological systems of our body, in local and global ecosystems, and in climate—and in human learning processes (from the individual on up through international organizations like the UN).[3] Overview[edit] Examples of applications[edit] Systems biology[edit]

System dynamics Dynamic stock and flow diagram of model New product adoption (model from article by John Sterman 2001) System dynamics is an approach to understanding the behaviour of complex systems over time. It deals with internal feedback loops and time delays that affect the behaviour of the entire system.[1] What makes using system dynamics different from other approaches to studying complex systems is the use of feedback loops and stocks and flows. These elements help describe how even seemingly simple systems display baffling nonlinearity. Overview[edit] System dynamics (SD) is a methodology and mathematical modeling technique for framing, understanding, and discussing complex issues and problems. Convenient GUI system dynamics software developed into user friendly versions by the 1990s and have been applied to diverse systems. System dynamics is an aspect of systems theory as a method for understanding the dynamic behavior of complex systems. History[edit] Topics in systems dynamics[edit]

What is Systems Theory? Systems theory is an interdisciplinary theory about the nature of complex systems in nature, society, and science, and is a framework by which one can investigate and/or describe any group of objects that work together to produce some result. This could be a single organism, any organization or society, or any electro-mechanical or informational artifact. As a technical and general academic area of study it predominantly refers to the science of systems that resulted from Bertalanffy's General System Theory (GST), among others, in initiating what became a project of systems research and practice. Systems theoretical approaches were later appropriated in other fields, such as in the structural functionalist sociology of Talcott Parsons and Niklas Luhmann. Overview Margaret Mead was an influential figure in systems theory. Contemporary ideas from systems theory have grown with diversified areas, exemplified by the work of Béla H. A system from this Russell Ackoff, Béla H. History Cybernetics