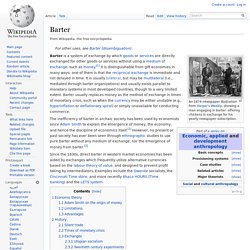 The inefficiency of barter in archaic society has been used by economists since Adam Smith to explain the emergence of money, the economy, and hence the discipline of economics itself.[2] However, no present or past society has ever been seen through ethnographic studies to use pure barter without any medium of exchange, nor the emergence of money from barter.[3] Since the 1830s, direct barter in western market economies has been aided by exchanges which frequently utilize alternative currencies based on the labour theory of value, and designed to prevent profit taking by intermediators.

Examples include the Owenite socialists, the Cincinnati Time store, and more recently Ithaca HOURS (Time banking) and the LETS system. Economic theory[edit] Adam Smith on the origin of money[edit] Communism. Communism is represented by a variety of schools of thought, which broadly include Marxism, anarchism and the political ideologies grouped around both. 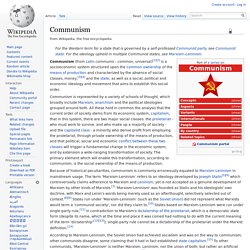 All these hold in common the analysis that the current order of society stems from its economic system, capitalism, that in this system, there are two major social classes: the proletariat - who must work to survive, and who make up a majority of society - and the capitalist class - a minority who derive profit from employing the proletariat, through private ownership of the means of production, and that political, social and economic conflict between these two classes will trigger a fundamental change in the economic system, and by extension a wide-ranging transformation of society. The primary element which will enable this transformation, according to communism, is the social ownership of the means of production. Because of historical peculiarities, communism is commonly erroneously equated to Marxism-Leninism in mainstream usage. Capitalism. The degree of competition, role of intervention and regulation, and scope of state ownership varies across different models of capitalism.[5] Economists, political economists, and historians have taken different perspectives in their analysis of capitalism and recognized various forms of it in practice. 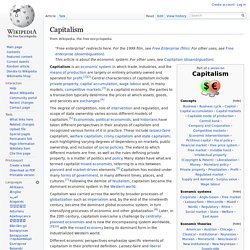 These include laissez-faire capitalism, welfare capitalism, crony capitalism and state capitalism; each highlighting varying degrees of dependency on markets, public ownership, and inclusion of social policies. The extent to which different markets are free, as well as the rules defining private property, is a matter of politics and policy. Capital in the Twenty-First Century. Capital in the Twenty-First Century is a 2013 book by French economist Thomas Piketty. 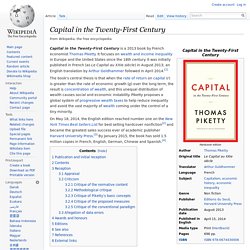 It focuses on wealth and income inequality in Europe and the United States since the 18th century. It was initially published in French (as Le Capital au XXIe siècle) in August 2013; an English translation by Arthur Goldhammer followed in April 2014.[1] On May 18, 2014, the English edition reached number one on the New York Times Best Sellers List for best selling hardcover nonfiction[2] and became the greatest sales success ever of academic publisher Harvard University Press.[3] By January 2015, the book has sold 1.5 million copies in French, English, German, Chinese and Spanish.[4] Publication and initial reception[edit] Entitlement theory. Entitlement theory is a theory of distributive justice and private property created by Robert Nozick in his book Anarchy, State, and Utopia. 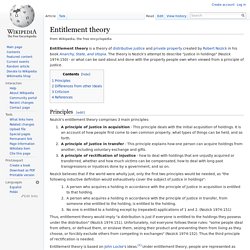 The theory is Nozick's attempt to describe "justice in holdings" (Nozick 1974:150) - or what can be said about and done with the property people own when viewed from a principle of justice. Principles[edit] Nozick's entitlement theory comprises 3 main principles: A principle of justice in acquisition - This principle deals with the initial acquisition of holdings. An Error Occurred Setting Your User Cookie. A Theory of Justice. A Theory of Justice is a work of political philosophy and ethics by John Rawls. 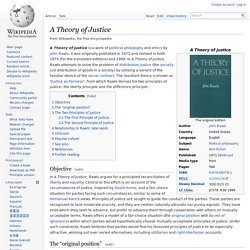 It was originally published in 1971 and revised in both 1975 (for the translated editions) and 1999. In A Theory of Justice, Rawls attempts to solve the problem of distributive justice (the socially just distribution of goods in a society) by utilising a variant of the familiar device of the social contract. The resultant theory is known as "Justice as Fairness", from which Rawls derives his two principles of justice: the liberty principle and the difference principle. 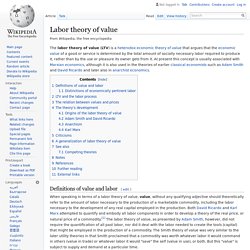 Both David Ricardo and Karl Marx attempted to quantify and embody all labor components in order to develop a theory of the real price, or natural price of a commodity.[1] The labor theory of value, as presented by Adam Smith, however, did not require the quantification of all past labor, nor did it deal with the labor needed to create the tools (capital) that might be employed in the production of a commodity.

An Error Occurred Setting Your User Cookie. Marginal utility. Marginality[edit] The term marginal refers to a small change, starting from some baseline level. 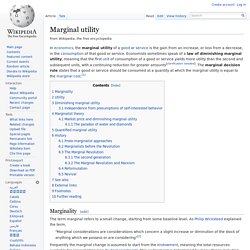 As Philip Wicksteed explained the term, "Marginal considerations are considerations which concern a slight increase or diminution of the stock of anything which we possess or are considering"[2] In practice the smallest relevant division may be quite large. Subjective theory of value. Overview[edit] According to the subjective theory of value, voluntary trades between individuals imply that both parties to the trade subjectively perceive the goods, labour or money they receive as being of higher value to the goods, labour or money they give away. 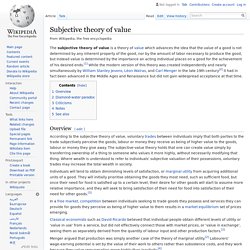 The subjective-value theory holds that one can create value simply by transferring ownership of a thing to someone who values it more highly, without necessarily modifying that thing. Where wealth is understood to refer to individuals' subjective valuation of their possessions, voluntary trades may increase the total wealth in society. Individuals will tend to obtain diminishing levels of satisfaction, or marginal utility from acquiring additional units of a good. In a free market, competition between individuals seeking to trade goods they possess and services they can provide for goods they perceive as being of higher value to them results in a market equilibrium set of prices emerging. The Growth of Economic Thought. Ludwig von Mises. Engaging Reason : On the Theory of Value and Action: On the Theory of Value ... - Joseph Raz. Beyond a subjective theory of value and towards a ‘fair price’: an organizational perspective on Fairtrade minimum price setting.

This article explores Fairtrade minimum price setting as an organizational formulation of a critical response to economic liberalism and its underlying notion of value—a subjective theory of value. 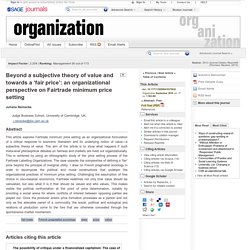 The aim of the article is to show what happens if such meta-level philosophical debates on fairness and markets are lived out organizationally. This is achieved by using an ethnographic study of the price setting process of the Fairtrade Labelling Organizations. The case unpacks the complexities of defining a ‘fair’ price beyond the principle of marginal utility. I draw on French pragmatist sociology in order to decompose the political and moral constructions that underpin the organizational practices of minimum price setting. Human Action. Human Action: A Treatise on Economics is a work by the Austrian economist and philosopher Ludwig von Mises. Widely considered Mises' magnum opus,[1] it presents the case for laissez-faire capitalism based on praxeology, or rational investigation of human decision-making. It rejects positivism within economics. It defends an a priori epistemology and underpins praxeology with a foundation of methodological individualism and speculative laws of apodictic certainty.

Mises argues that the free-market economy not only outdistances any government-planned system, but ultimately serves as the foundation of civilization itself. Nationalökonomie: Theorie des Handelns und Wirtschaftens is the 1940 German-language predecessor to Human Action. Paradox of value. An image of water, a commodity that is essential to life. In the paradox of value, it is an apparent contradiction that it is cheaper than diamonds, despite diamonds not having such an importance to life.

Labor theory of value[edit] In a passage of Adam Smith's An Inquiry into the Nature and Causes of the Wealth of Nations, he discusses the concepts of value in use and value in exchange, and notices how they tend to differ: What are the rules which men naturally observe in exchanging them [goods] for money or for one another, I shall now proceed to examine. These rules determine what may be called the relative or exchangeable value of goods.

Value in Ethics and Economics - Elizabeth Anderson. The Theory of the Individual in Economics: Identity and Value - John B Davis. The Growth of Economic Thought.