Rap music and crime. No argument, no mitigating circumstances - the government wants to end judges' discretion and impose a mandatory jail sentence of five years for gun crime. 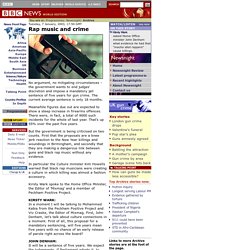 The current average sentence is only 18 months. Meanwhile figures due out are expected to show a steep increase in firearms offences. There were, in fact, a total of 9000 such incidents for the whole of last year. That's up 55% over the past five years. But the government is being criticised on two counts. Economists Say Movie Violence Might Temper the Real Thing. Will the Dark Knight Rises shootings revive the debate on 'copycat' crimes? The US reels from another horrific killing spree: 14 people shot dead and many more injured at a showing of the new Batman movie, The Dark Knight Rises. 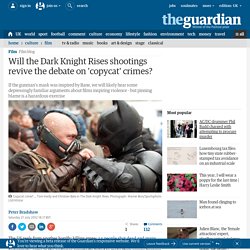 Sickeningly, some in the audience reportedly failed to make their escape because they assumed at first that the disturbance was simply a special effect. The gunman was apparently wearing a mask, perhaps a gas-mask, though details are still unclear. Was the mask inspired by the film's villain, Bane? Conviction upheld in '03 Fayette slayings. The court, in a 5-0 decision, said Devin Moore, also known as Devin Darnell Thompson, received a fair trial. 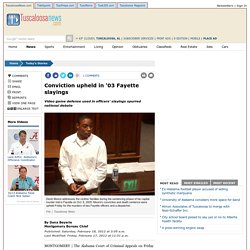 “After such an independent weighing (of the case) we are convinced that the death penalty was the appropriate sentence in this case,” Judge Michael Joiner wrote. Thompson's case spawned a civil suit against Sony Corp., retailers and publishers on behalf of family members of two of the police officers. The news show “60 Minutes” also devoted a segment to the case. Murder Reignites Grand Theft Auto Controversy. Polwat Chino, a 19-year-old high school student, told police he had been playing Grand Theft Auto IV in a Bangkok shop before running out of money. 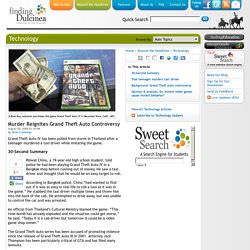 He saw a taxi driver and thought that he would be an easy target to rob. According to Bangkok police, Chino “had wanted to find out if it was as easy in real life to rob a taxi as it was in the game.” He stabbed the taxi driver multiple times and threw him into the back of the cab. He attempted to drive away, but was unable to control the car and was arrested. An official from Thailand’s Cultural Ministry blamed the game. Strickland v. Sony. History[edit] Devin Moore was convicted in 2005 for the 2003 shooting of 2 police officers and a dispatcher as he was being detained for allegedly stealing a car. 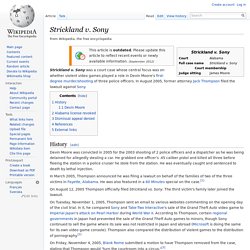 He grabbed one officer's .45 caliber pistol and killed all three before fleeing the station in a police cruiser he stole from the station. He was eventually caught and sentenced to death by lethal injection. In March 2005, Thompson announced he was filing a lawsuit on behalf of the families of two of the three victims in Fayette, Alabama. He was also featured in a 60 Minutes special on the case.[1] On August 12, 2005 Thompson officially filed Strickland vs. On Tuesday, November 1, 2005, Thompson sent an email to various websites commenting on the opening day of the civil trial. On Friday, November 4, 2005, Blank Rome submitted a motion to have Thompson removed from the case, stating that Thompson would "turn the courtroom into a circus Devin Moore[edit] Moore was apprehended several hours later in Mississippi. References[edit] [POST GAME]폭력게임 열풍때 `청소년 범죄` 되레 줄어. 폭력적인 게임을 즐기면 현실에서도 폭력적으로 변할까. 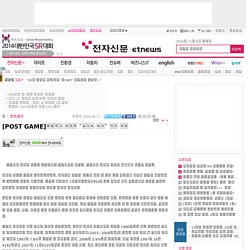 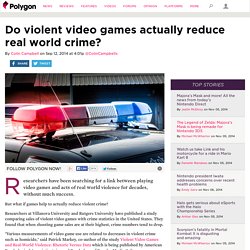 But what if games help to actually reduce violent crime? Researchers at Villanova University and Rutgers University have published a study comparing sales of violent video games with crime statistics in the United States. They found that when shooting game sales are at their highest, crime numbers tend to drop. "Various measurements of video game use are related to decreases in violent crime such as homicide," said Patrick Markey, co-author of the study Violent Video Games and Real-World Violence: Rhetoric Versus Data which is being published by American Psychological Association's journal Psychology of Popular Media Culture. "We always have to be careful with correlational data," added Markey. Violent video games and mass violence: A complex link. 7. 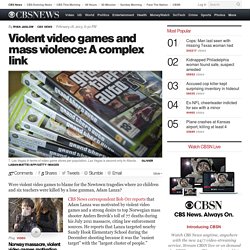 Las Vegas In terms of video game stores per population, Las Vegas is second only to Atlanta. OLIVIER LABAN-MATTEI/AFP/Getty Images Were violent video games to blame for the Newtown tragedies where 20 children and six teachers were killed by a lone gunman, Adam Lanza? CBS News correspondent Bob Orr reports that Adam Lanza was motivated by violent video games and a strong desire to top Norwegian mass shooter Anders Breivik's toll of 77 deaths during his July 2011 massacre, citing law enforcement sources.

He reports that Lanza targeted nearby Sandy Hook Elementary School during the December shooting because it was the "easiest target" with the "largest cluster of people. " A look back at the Norway massacre Law enforcement reportedly discovered a "trove" of violent video games from the shooter's basement, according to Orr, where the 20-year-old spent hours alone, playing with windows blacked out, honing his computer shooting skills. Dr. . © 2013 CBS Interactive Inc. Violent video games make kids aggressive, study suggests. (CBS) Do violent video games breed violent kids? 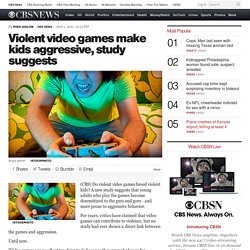 A new study suggests that young adults who play the games become desensitized to the guts and gore - and more prone to aggressive behavior. For years, critics have claimed that video games can contribute to violence, but no study had ever shown a direct link between the games and aggression. Until now. "Video games are excellent teaching tools because they reward players for engaging in certain types of behavior," study author Dr.