This online tool reveals your personality based on Facebook 'likes' Facebook has a huge amount of data on you - whose profiles you engage with, how much time you spend on it, and everything you've said in a message. 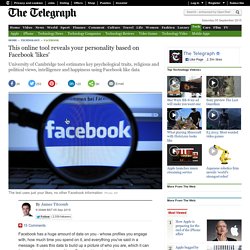 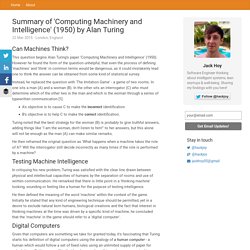 This question begins Alan Turing's paper 'Computing Machinery and Intelligence' (1950). Hipster Barbie Shows Us How Plastic We All Really Are On Social Media. SWARM OF FILES (pdf) Object-oriented philosopher Graham Harman judges the sciences, the humanities, and common sense in terms of the crude philosophical criteria of another age and finds them lacking in knowledge of reality. 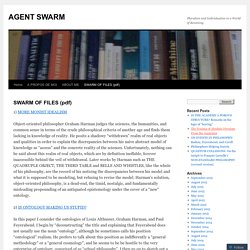 The Plane of Obscurity — Simulation and Philosophy. Review of, Manual DeLanda, Philosophy and Simulation, the emergence of synthetic reason London, Continuum, 2011 ISBN 1441170286 240 Pages Manual DeLanda has been best known as a significant figure in the introduction of the works of Gilles Deleuze to the English speaking world with numerous examples of scientific phenomenon. 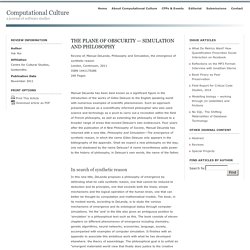 A forum for the study of the materialism and ontology of finance. Web Magna Carta: WWW inventor calls for ‘online bill of rights’ The Revolution Will Be Televised. What Guy Debord calls la societe du spectacle1, what Jean Baudrillard calls la societe de consommation2 , what R.H. 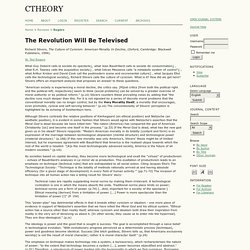 Tawney calls the acquisitive society3 , what Istvan Meszaros calls "a metabolic system of control"4 , what Arthur Kroker and David Cook call the postmodern scene and excremental culture5 , what Jacques Ellul calls the technological society6, Richard Stivers calls the culture of cynicism. What is it? How did we get here? Stivers offers an important analysis that proposes an answer to these questions. "American society is experiencing a moral decline, the critics say.

A Cartesian View From Nowhere. Adopting a transgressive approach towards disciplinary boundaries, Body Criticism as a project intends to describe and illustrate how visual metaphor advanced artistic and medical understanding of the human body during the eighteenth century. 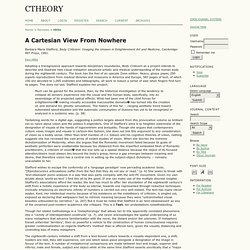 The book has the feel of an upscale Zone edition. Heavy, glossy paper, 250 superb reproductions from medical libraries and museums in America and Europe, 587 pages of text, of which 100 are devoted to 1,005 endnotes and bibliography, all work to induce a sense of awe when fingers first turn its pages. This does not last. Joe Firmage’s radical plan to simplify the Internet, Part 1. Legendary Internet entrepreneur Joe Firmage is back, and he plans to turn the Internet upside down. 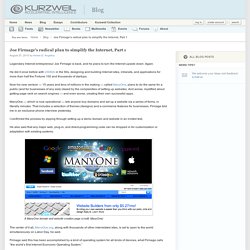 Again. Sousveillance as a Response to Surveillance. Five years ago I wrote about the concept of “sousveillance,” which was then a budding counterpoint to surveillance. 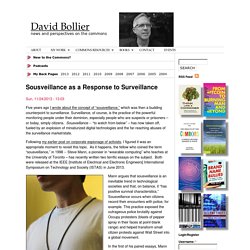 Surveillance, of course, is the practice of the powerful monitoring people under their dominion, especially people who are suspects or prisoners – or today, simply citizens. Sousveillance -- “to watch from below” – has now taken off, fueled by an explosion of miniaturized digital technologies and the far-reaching abuses of the surveillance market/state. Following my earlier post on corporate espionage of activists, I figured it was an appropriate moment to revisit this topic. Communication, Politics & Culture - Facebook, Whatsapp and the commodification of affective labour. ‘The Glass Cage,’ by Nicholas Carr. In his previous book, “The Shallows” — essential reading about our Internet Age — Nicholas Carr, former executive editor of the Harvard Business Review and author of several books about technology, discussed the detrimental effects the Web has on our reading, thinking and capacity for reflection. 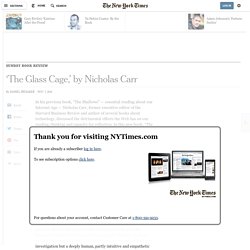 In this new book, “The Glass Cage: Automation and Us,” similarly essential if slightly repetitive, Carr explains how certain aspects of automative technology can separate us from, well, Reality. How, for all its ­miraculous-seeming benefits, automation also can and often does impair our mental and physical skills, cause dreadful mistakes and accidents, particularly in medicine and aviation, and threaten to turn the algorithms we create as servants into our mindless masters — what sci-fi movies have been warning us about for at least two or three decades now.

Exhibit A: Electronic medical records. Technology’s Prophet: It’s Jean Baudrillard, not Marshall McLuhan. As we move deeper into the shallows, so to speak, we naturally seek a guide. 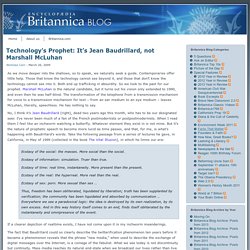 Contemporaries offer little help. Those that know the technology cannot see beyond it, and those that don’t know the technology cannot see into it. Facebook's Gender Equality Update: Why Icons Have Meaning - ReadWrite. Icons are deceptively complex. The best ones have clean, basic graphics. But even simple outlines can pack a lot of meaning and nuance—particularly when those images depict people. People are tricky. And representing a whole group of them with a single icon can get complicated. For Facebook designer Caitlin Winner, that wasn't an excuse—that was a challenge she accepted. See also: How This Bathroom Sign Supports Women In Tech.

ISIS Is Winning the Social Media War, U.S. Concludes. WASHINGTON — An internal State Department assessment paints a dismal picture of the efforts by the Obama administration and its foreign allies to combat the Islamic State’s message machine, portraying a fractured coalition that cannot get its own message straight. The assessment comes months after the State Department signaled that it was planning to energize its social media campaign against the militant group.

It concludes, however, that the Islamic State’s violent narrative — promulgated through thousands of messages each day — has effectively “trumped” the efforts of some of the world’s richest and most technologically advanced nations. It also casts an unflattering light on internal discussions between American officials and some of their closest allies in the military campaign against the militants. A “messaging working group” of officials from the United States, Britain and the United Arab Emirates, the memo says, “has not really come together.” Continue reading the main story Mr. AEC534/WC196: Introduction to Social Network Research: Application of Social Network Analysis in Extension. Anil Kumar Chaudhary and Laura A. Warner2 Introduction to Social Network Analysis Social Network Analysis (SNA) is an innovative approach Extension professionals can use to understand interactions among Extension clientele. SNA can be used to define and describe society and its organizations and to assess the impact of various organizational structures (Zack, 2000).

SNA is composed of both analytical methods (statistical procedures) and substantive social science theories over and above ability to produce visual network maps to analyze the characteristics of actors (e.g., Extension clientele) and their relationships (e.g., friendships) with other actors in the network (Scott & Carrington, 2011; Springer & de Steiguer, 2011). Matthews - Victimary Thinking, Celebrity, CCTV Building. The innovative structure of the building is the result of long term collaboration between European and Chinese engineers to achieve new possibilities for the high-rise. The structure of the CCTV Headquarters, and the forces at work within it, is visible on its façade: a web of diagonals that becomes dense in areas of greater stress, looser and more open in areas requiring less support.

The façade itself becomes a visual manifestation of the building’s structure. ("CCTV—Headquarters") Magic, Technics and Culture. The Mysticism of (Technical) Evolution. JCRT 13.2 Summer 2014. FAMOUS SOCIOLOGISTS. © 1996-2015 AByT! All Rights Reserved. S(t)imulacrum(b) Group Discussion: “The Medium Is the Message” by Marshall McLuhan. This is Marshall McLuhan. It's impossible to tell the difference between real life and video games. Rules of Play. Stallabras: Just Gaming. Julian Stallabras This essay first appeared in New Left Review 198 (March/April 1993): 83-106 as "Just Gaming: Allegory and Economy in Computer Games. " STurkelSecondSelf. Evocative Objects. Langdon Winner. Cpw060101004_2. Postmodern Virtualities. Mark Poster (This essay appears as Chapter 2 in my book The Second Media Age (Blackwell 1995) On the eve of the twenty first century there have been two innovative discussions about the general conditions of life: one concerns a possible "postmodern" culture and even society; the other concerns broad, massive changes in communications systems.

Char Davies describes the immersive virtual space "Osmose" (first exhibited at the Museum of Contemporary Art in Montreal, September 1995) as a spatio-temporal arena, wherein mental models or abstract constructs of the world can be given virtual embodiment and then kinesthetically (i.e., via motor perception) and synesthetically (i.e., via a mixture of visual, auditory, and motor perception) explored through full-body immersion and interaction. That means that visitors are "immersed" in symbols that we can experience corporally and possibly emotionally from inside.

While most of the virtual environments I have experienced use the metaphor of flying to move the visitor through virtual and symbolic space, Davies uses the metaphor of deep-sea diving in which we move between worlds organized largely in terms of up and down. We also hear sounds derived from sampling a single male and female voice. Game Studies - Lara Croft: Feminist Icon or Cyberbimbo? On the Limits of Textual Analysis. By Helen W. Kennedy. Jesper Juul. Jenkins.pdf.