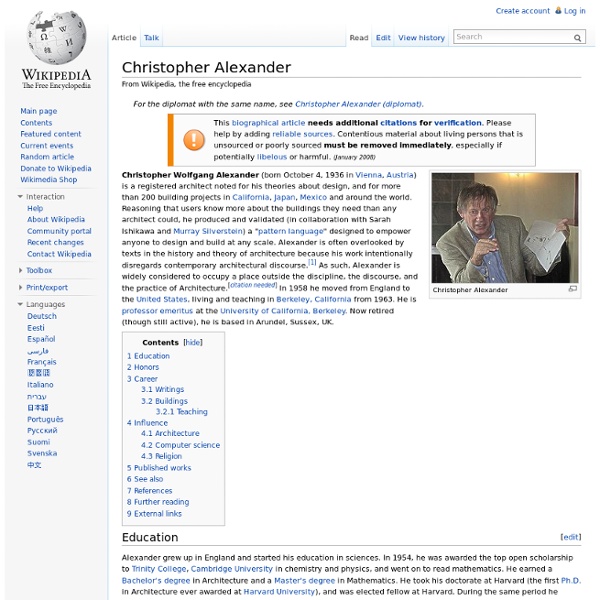 Christopher Alexander Christopher Wolfgang Alexander (born October 4, 1936 in Vienna, Austria) is an architect noted for his theories about design, and for more than 200 building projects in California, Japan, Mexico and around the world. Reasoning that users know more about the buildings they need than any architect could, he produced and validated (in collaboration with Sarah Ishikawa and Murray Silverstein) a "pattern language" designed to empower anyone to design and build at any scale. Alexander is often overlooked by texts in the history and theory of architecture because his work intentionally disregards contemporary architectural discourse.[1] As such, Alexander is widely considered to occupy a place outside the discipline, the discourse, and the practice of Architecture.[citation needed] In 1958, he moved from England to the United States, living and teaching in Berkeley, California from 1963. He is professor emeritus at the University of California, Berkeley. Education[edit]

Top 100 Urban Thinkers The poll was active for one month, from August 7th to September 7th, 2009. We would never claim that this is a definitive list; voters were given free reign to submit and vote for whomever they liked. Our only caveat is that we cleared out a couple of submissions that were clearly in jest, such as "Jesus" (although I'm sure someone could make a legitimate argument for his influence on urban planning). The other significant issue with this list that will surely be raised is the lack of women: only 9 out of the top 100 are female. The thinkers that are here are a fascinating bunch, ranging from planners of the past like Baron Haussmann, the civic planner that changed the face of Paris in the 19th century, to active thinkers of today like Scott Bernstein, President and Co-Founder of the Center for Neighborhood Technology. As of now, we've only just begun filling in these biographies.

Pattern Language.com BUILDING LIVING NEIGHBORHOODS If you are one of a group of friends who are talking about building a new place to live a better life, this website can show you ways of working that are inspiring and related to the things which matter in your lives. The ACTION & PRACTICE pages will guide you. If you are a developer or landowner, this website can show you ways of working that are more capable of creating healthy, hospitable and beautiful places for people to live, than present forms of practice typically allow. It does not cost more. If your family or business is helping to rebuild an old neighborhood, or moving to a new one, this website will give you tools and a voice which will be heard, so you can genuinely influence what happens. If you are a community organizer, or a leader in a local community, this website will give you tools to be sure that residents and local businesses can play an effective and practical part in decision making, which will be heard.

Katarxis 3:  New Science, New Urbanism -- New Architecture? Christopher Alexander, Architect and Mathematician Katarxis Nº 3 Author of Notes on the Synthesis of Form, A City is Not A Tree, A Pattern Language and - just released - The Nature of Order Michael Mehaffy: We’re seeing some astonishing things coming out of the sciences just now. Geometry seems to be the hot topic - the complex structure of proteins, the unfolding processes of embryology, the distribution of large-scale structures in the cosmos, and so on. And there has been more confirmation of the fantastic notion that life itself is a certain kind of geometric structure. Of course, you have been arguing something like this for years, and developing it as the basis for a more advanced architecture. You recently said you find these new geometrical insights of science very promising and exciting. You know, up until about 1600 it was essentially religious authority that held sway, and one did what that tradition said to do. Now that's an incredibly powerful thing that's been running now for about 400 years. MM: And historic? MM: Yes.