LongPack Games - Card & Board Game Manufacturing. Court rules in favor of cloned tabletop game - No protection under US copyright law - Zachary C. Strebeck: Attorney at Law. A final decision has been handed down in the 2-year copyright infringement case involving the card game Bang! 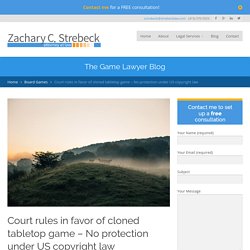 And its clone, Legends of the Three Kingdoms. The backstory Back in 2014, the creators of the card game Bang! Filed a copyright infringement lawsuit against Chinese company Yoka Games and their US distributor, ZiKo Games, LLC. Cryptochecks. Breakdown of RPG Players. Back to SeanKReynolds.com home : Back to RPG Files : Back to Gaming A 2-Axis Analysis of a Survey 1/26/03 Update: The only other information released about the survey can be found here. 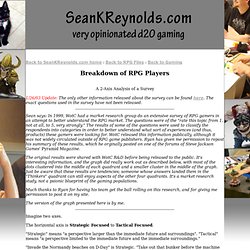 The exact questions used in the survey have not been released. Sean says: In 1999, WotC had a market research group do an extensive survey of RPG gamers in an attempt to better understand the RPG market. The questions were of the "rate this topic from 1, not at all, to 5, very strongly. " The original results were shared with WotC R&D before being released to the public. Much thanks to Ryan for having his team get the ball rolling on this research, and for giving me permission to post it on my site.

The version of the graph presented here is by me. Imagine two axes. The horizontal axis is Strategic Focused to Tactical Focused. "Strategic" means "a perspective larger than the immediate future and surroundings". "Invade the Normandy beaches on D-Day" is Strategic. This creates four quadrents. Big Game Theory!: Towards a Grand Unified Theory of Boardgamery. There has been an interesting series of articles on the League of Game Makers about the whole mechanics-first or theme-first approach to designing games (Part 1, Part 2, Part 3); and in turn how important theme is or isn't in terms of shaping a game's overall experience and long-term success or failure. 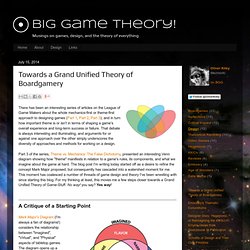 That debate is always interesting and illuminating, and arguments for or against one approach over the other simply underscores the diversity of approaches and methods for working on a design. Part 3 of the series, Theme vs. Mechanics: The False Dichotomy, presented an interesting Venn diagram showing how "theme" manifests in relation to a game's rules, its components, and what we imagine about the game at hard. Deeper in the Game.

I try not to do investigations in games because I think they’re generally a poor fit for roleplaying games given current design in general. 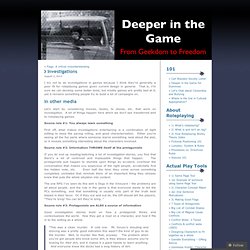 That is, I’m sure we can develop some better tools, but mostly games are pretty bad at it, yet it remains something people try to build a lot of campaigns on. In other media Let’s start by considering movies, books, tv shows, etc. that work on investigation. A lot of things happen here which we don’t see transferred well to roleplaying games. Source rule #1: You always learn something First off, what makes investigations entertaining is a combination of tight editing to keep the pacing rolling, and good characterization. Source rule #2: Information THROWS itself at the protagonists If you do end up reading/watching a lot of investigation stories, you find that there’s a lot of contrived and implausible things that happen.

Skills as Resources – the Genius of Gumshoe. The Gumshoe system, as designed by Robin D. 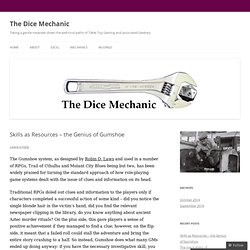 Laws and used in a number of RPGs, Trail of Cthulhu and Mutant City Blues being but two, has been widely praised for turning the standard approach of how role-playing game systems dealt with the issue of clues and information on its head. Traditional RPGs doled out clues and information to the players only if characters completed a successful action of some kind – did you notice the single blonde hair in the victim’s hand, did you find the relevant newspaper clipping in the library, do you know anything about ancient Aztec murder rituals? 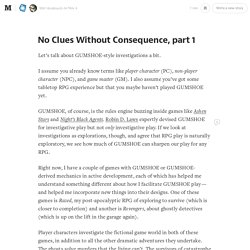 I assume you already know terms like player character (PC), non-player character (NPC), and game master (GM). I also assume you’ve got some tabletop RPG experience but that you maybe haven’t played GUMSHOE yet. GUMSHOE, of course, is the rules engine buzzing inside games like Ashen Stars and Night’s Black Agents. Robin D. Right now, I have a couple of games with GUMSHOE or GUMSHOE-derived mechanics in active development, each of which has helped me understand something different about how I facilitate GUMSHOE play — and helped me incorporate new things into their designs.