They argue that ‘important’ or ‘valid’ knowledge now is different from prior forms of knowledge, particularly academic knowledge. The Difference Between Pedagogy, Andragogy, And Heutagogy. Coming Home: Returning to a Pedagogy of Small – Here to there. In July, I completed a two-week doctoral residency. 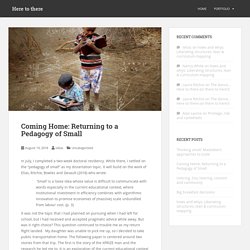 While there, I settled on the “pedagogy of small” as my dissertation topic. It will build on the work of Elias, Ritchie, Bowles and Gevault (2018) who wrote: ‘Small’ is a loose idea whose value is difficult to communicate with words especially in the current educational context, where institutional investment in efficiency combines with algorithmic innovation to promise economies of (massive) scale unbundled from labour cost. How To Remember Anything Forever-ish. Also, this interactive comic is PUBLIC DOMAIN meaning you can freely use this thing for educational, personal, or even commercial purposes. You already have my permission! New Study Finds Multiple Problems with Push for Social-Emotional Learning in K-12 Education - Pioneer Institute. Kindergarten learning approach. Social Development Theory. Decoding the Teenage Brain (in 3 Charts) Competency-Based Learning Definition - The Glossary of Education Reform.

Competency-based learning refers to systems of instruction, assessment, grading, and academic reporting that are based on students demonstrating that they have learned the knowledge and skills they are expected to learn as they progress through their education. 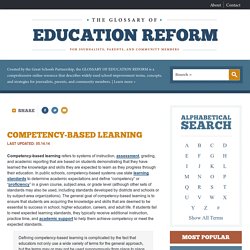 In public schools, competency-based systems use state learning standards to determine academic expectations and define “competency” or “proficiency” in a given course, subject area, or grade level (although other sets of standards may also be used, including standards developed by districts and schools or by subject-area organizations). The general goal of competency-based learning is to ensure that students are acquiring the knowledge and skills that are deemed to be essential to success in school, higher education, careers, and adult life.

In practice, competency-based learning can take a wide variety of forms from state to state or school to school—there is no single model or universally used approach. Reform Debate. Untitled. Learning theory. Learning Theories and Models summaries - Educational Psychology.

The scientists who make apps addictive. In 1930, a psychologist at Harvard University called B.F. 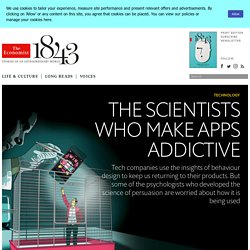 Skinner made a box and placed a hungry rat inside it. The box had a lever on one side. As the rat moved about it would accidentally knock the lever and, when it did so, a food pellet would drop into the box. After a rat had been put in the box a few times, it learned to go straight to the lever and press it: the reward reinforced the behaviour. Skinner proposed that the same principle applied to any “operant”, rat or man. Taking Maps in a New Direction. Apps bridge people to the things they want and the places they want to find via their phone, tablet, or PC quickly and effortlessly. 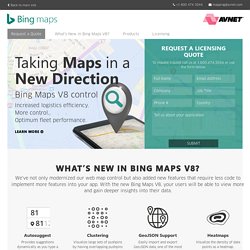 Consumers specifically, use apps for their most basic needs and desires; checking the weather, listening to music, scoping out deals, finding new venues, and of course communicating with friends. With this information readily available, consumers have a more intimate, connected and relevant experience with your business. Bing Maps allows your application to: Debunking the Case for National Standards (#) January 14, 2010 One-Size-Fits-All Mandates and Their Dangers By Alfie Kohn [This is a slightly expanded version of the article published in Education Week’s annual “Quality Counts” issue.] 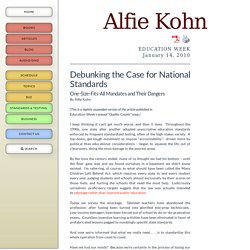 The NCTE Definition of 21st Century Literacies. Updated February 2013Adopted by the NCTE Executive Committee, February 15, 2008 Literacy has always been a collection of cultural and communicative practices shared among members of particular groups. 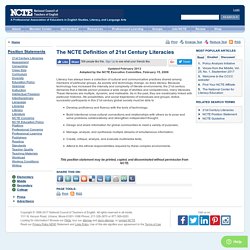 As society and technology change, so does literacy. Because technology has increased the intensity and complexity of literate environments, the 21st century demands that a literate person possess a wide range of abilities and competencies, many literacies. (Higher) Education as Bulwark of Uselessness - Hybrid Pedagogy. Almost two years ago, halfway through the twisting path that was my doctoral course, I found myself in Finland, at the “Critical Evaluation of Game Studies Seminar”, where, above all the “big names” in the field of Game Studies who spoke there (among which were Aarseth, Juul, and Mäyrä), one thing was indelibly imprinted in my memory: Canadian sociologist Bart Simon’s characterisation of Game Studies as a true, undeniable “bulwark of uselessness”, a field of thought that can work in resistance to all appeals to productivity and efficiency. 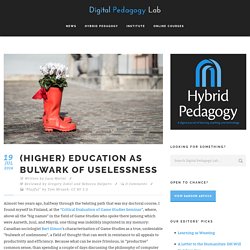 Because what can be more frivolous, in “productive” common sense, than spending a couple of days discussing the philosophy of computer games? This is an uncomfortable position, one that I am critically coming to terms with as an engaged pedagogist and game scholar. Early Education Transformed. List of Contributors Lesley Abbott is Professor of Early Childhood Education at the Institute of Education at Manchester Metropolitan University. 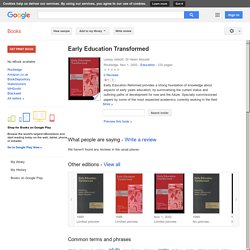 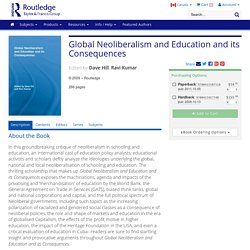 The thrilling scholarship that makes up Global Neoliberalism and Education and its Consequences exposes the machinations, agenda and impacts of the privatising and 'merchandisation' of education by the World Bank, the General Agreement on Trade in Services (GATS), biased think tanks, global and national corporations and capital, and the full political spectrum of Neoliberal governments. Memory Machines: Learning, Knowing, and Technological Change. 20 min read This is the transcript of the talk I gave today at the Digital Pedagogy Lab at the University of Prince Edward Island. 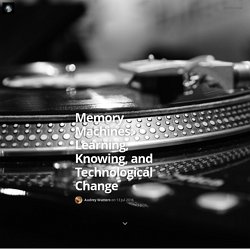 You can find the slides here. Introduction to "More Than a Score" Introduction to More Than a Score By Alfie Kohn In early March of 1999, on a chilly Sunday morning in San Francisco, more than a thousand educators packed into a huge convention center space during ASCD’s annual conference. They were there for an event I was hosting called “The Deadly Effects of ‘Tougher Standards,'” which I’d promised would be not just a presentation but “an organizing session, an attempt to form a national network of educators who have had enough and are ready to become politically active.”

I should mention that I had (and have) no formal affiliation with any institution, no foundation support, no administrative assistant. At the time I didn’t even own a copy machine. Critical Explorers » Objectively Speaking. Posted by Alythea on October 24, 2011 Author: Mike Fishback. Making Thinking Happen. 70:20:10 by Charles Jennings. International Centre for Educators' Learning Styles.

Rethinking Thinking - Does Bloom's Taxonomy Align with Brain Science? Dr. From Andragogy to Heutagogy. Author: Stewart Hase and Chris Kenyon (2001) Southern Cross University. SEFE 680 paper. Online Learning. The Invented History of 'The Factory Model of Education' 12 min read “What do I mean when I talk about transformational productivity reforms that can also boost student outcomes? Our K–12 system largely still adheres to the century-old, industrial-age factory model of education. A century ago, maybe it made sense to adopt seat-time requirements for graduation and pay teachers based on their educational credentials and seniority. Educators were right to fear the large class sizes that prevailed in many schools. But the factory model of education is the wrong model for the 21st century.” – US Secretary of Education Arne Duncan (2010)