Raptitude.com – Getting Better at Being Human 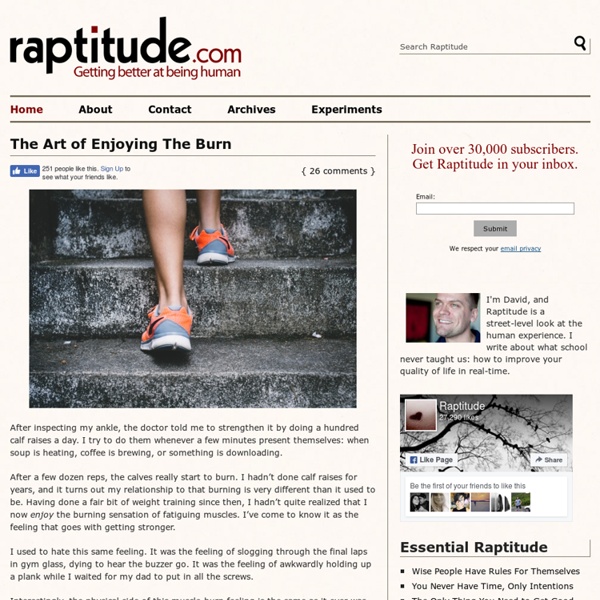 Beside me on my desk at all times is a pad of sticky notes, which was the size of a Rubik’s cube when I bought it. Now it’s the size of a Melba Toast. Whenever I think of something I might have to deal with, I write it down on one of these squares. The sheets alternate yellow and hot pink, so my inbox always looks like a tropical salad. Every few days I process these little notes, which means I look at what I’ve written and decide what to do about it. Sometimes I neglect this duty for a while, and end up with a week’s worth (or two) of sticky notes.

Before I Die & Candy Chang - StumbleUpon What matters most to you Interactive public art project that invites people to share their personal aspirations in public. After losing someone she loved and falling into depression, Chang created this experiment on an abandoned house in her neighborhood to create an anonymous place to help restore perspective and share intimately with her neighbors. Inspiration & Motivation Blog Photo by Alexey05 Everyone must have ever been under stress relating to either career, social or household affairs. Gratefully, good communication and self management can remove the stress occurring in marriage life. No free time, office job strains, kids’ nuisances, bills to pay, never ending house chores. They all sound too familiar, don’t they? Stress haunts you in everything you do, and can affect your feeling anytime.

Who You Really Are Okay, this post is the last thrust in our trip down the proverbial rabbit-hole, which so far has looked at what the ego is, and how the late Douglas Harding can help us answer that big, big question — who are you, really? This is part one of a two-part post. I had no idea what I was getting into. Back in October, I arrived at an island retreat called Hollyhock, to take what I thought was a five-day course on Buddhism. Inventors, Innovators, Innovations, Inventions Past Present and Future CBS asks for more money from a declining Time-Warner Cable, while customers can get it nearly free online or via an antenna. Before Google Glass' latest patch, a picture could have been worth a thousand hacks. It might be the technology of the future — but not of the present, judging by the simplistic and surprisingly expensive items offered so far. Bigger isn't always better. Two roboticists weigh in on just what it would take to make a giant robot—and why humanity should probably look elsewhere for defense against alien invaders.

Reality Is Unrealistic As we've mentioned a few times before, the real world occasionally gives rise to murderers so terrifyingly crazy that if we saw them in a horror film, we would instantly write them off as utterly ridiculous B-movie cheese. When exposed to an exaggeration or fabrication about certain real-life occurrences or facts, some people will perceive the fictional account as being more true than any factual account. This might lead to people acting on preconceptions about unfamiliar matters even in a life-or-death situation, or cause viewers to cry foul when things on a show work out in a way that actually is realistic, but contrary to "what everybody knows", like complaining of the "fake Scottish accent" of a real Scottish actor or about a character's death from a bullet "merely" to the shoulder.

grimmtmp from cmu.edu - StumbleUpon This book contains 209 tales collected by the brothers Grimm. The exact print source is unknown. The etext appears to be based on the translation by Margaret Hunt called Grimm's Household Tales, but it is not identical to her edition. (Some of the translations are slightly different, the arrangement also differs, and the Grimm's scholarly notes are not included.) The etext received by the Universal Library did not include story titles. They have been restored in this edition, based on Hunt's titles.

Ricky Spears’ Blog For many years, I’ve had a metal swing frame with an upholstered seat next to the garden pond in my back yard. Unfortunately, they only seem to last a few years. This year, I decided to purchase a wood swing and a wood frame in hopes that these will last much longer. I chose the Great American Woodies 5’ Cypress Mission Swing and the Cypress A-Frame (also by Great American Woodies) from our nearby Lowe’s Home Improvement store. After adding a seat cushion, I’m mostly happy with the swing. The Problem and Proposed Solution

Einstein-The World As I See It "How strange is the lot of us mortals! Each of us is here for a brief sojourn; for what purpose he knows not, though he sometimes thinks he senses it. But without deeper reflection one knows from daily life that one exists for other people -- first of all for those upon whose smiles and well-being our own happiness is wholly dependent, and then for the many, unknown to us, to whose destinies we are bound by the ties of sympathy. A hundred times every day I remind myself that my inner and outer life are based on the labors of other men, living and dead, and that I must exert myself in order to give in the same measure as I have received and am still receiving... "I have never looked upon ease and happiness as ends in themselves -- this critical basis I call the ideal of a pigsty. The ideals that have lighted my way, and time after time have given me new courage to face life cheerfully, have been Kindness, Beauty, and Truth.

Human nature and the human condition Aspects of human nature - like our capacity for language, reasoning or emotions - are amenable to scientific analysis that looks at where they come from and how they work using tools like evolutionary biology, genetics, or neuroscience. But not everything about us that is important is innate. Some deeply entrenched features and characteristics of human life are actually contingent on our human history, not our human biology. Such aspects of the human condition - like marriage, sports, and war - are therefore not amenable to such scientific analysis and must be studied in a more humanistic way. The key to grasping the difference between these two distinct modes of anthropology is to look beyond how important and even seemingly ubiquitous certain characteristics are in modern human populations.

Ultimate To Do List Image Credit: DCI Ami James counts down 30 of the most mind-blowing experiences the world has to offer. These are the ultimate things to do while you're still young enough to do them and get away with it! Ami offers the following three rules for getting a tattoo. Aptitude Assessment What is Aptitude Assessment? Suppose that two persons of equal intelligence have the same opportunities to learn a job or develop a skill. They attend the same on-the-job training or classes, study the same material, and practice the same length of time. One of them acquires the knowledge or skill easily; the other has difficulty and takes more time, if they ever master the skill. These two people differ in aptitude for this type of work or skill acquisition.