Perceptual and Cognitive Skill Development in Soccer: The Multidimensional Nature of Expert Performance. This study examined the relative contribution of visual, perceptual, and cognitive skills to the development of expertise in soccer. 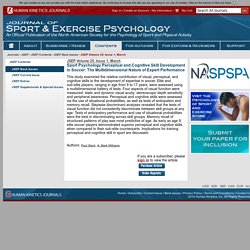 Elite and sub-elite players, ranging in age from 9 to 17 years, were assessed using a multidimensional battery of tests. Four aspects of visual function were measured: static and dynamic visual acuity; stereoscopic depth sensitivity; and peripheral awareness. Perceptual and cognitive skills were assessed via the use of situational probabilities, as well as tests of anticipation and memory recall.

Stepwise discriminant analyses revealed that the tests of visual function did not consistently discriminate between skill groups at any age. Tests of anticipatory performance and use of situational probabilities were the best in discriminating across skill groups. Soccer Stars Ranked Using Statistics. This Behind the Scenes article was provided to LiveScience in partnership with the National Science Foundation. 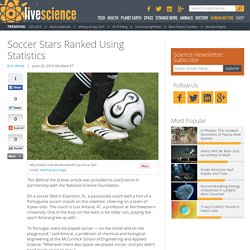 On a soccer field in Evanston, Ill., a passionate coach with a hint of a Portuguese accent stands on the sidelines, cheering on a team of 9-year-olds. The coach is Luís Amaral, 41, a professor at Northwestern University. One of the boys on the team is his older son, playing the sport Amaral grew up with. "In Portugal, every kid played soccer — on the street and on the playground," said Amaral, a professor of chemical and biological engineering at the McCormick School of Engineering and Applied Science. "Wherever there was space, we played soccer, and you didn't need much space to play. " Watching professional soccer was just as important as playing and when they were children Amaral and his friends often debated about which professional players were "the best. 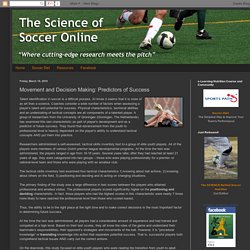 At times it seems that it is more of an art than a science. Coaches consider a wide number of factors when assessing a player’s talent and potential for success. Physical characteristics, technical abilities and an understating of tactical concepts are all components of a talented player. A group of researchers from the University of Groningen (Groningen, The Netherlands) has examined this last characteristic as part of player’s development and as a predictor of future success.

They found that advancement from the youth to professional level is heavily dependant on the player’s ability to understand tactical concepts AND put them into practice. Researchers administered a self-assessed, tactical skills inventory test to a group of elite youth players. The primary finding of the study was a large difference in test scores between the players who attained professional and amateur status.

Reference: Executive function: the creative side of elite soccer. Elite Soccer Players’ Brains Excel At Planning And Problem Solving. Coaches and commentators often refer to an athlete’s ability to “see the field” or be a play-maker. 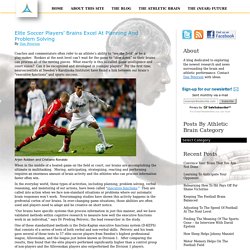 Rookies at the next level can’t wait for the game to “slow down” so their brains can process all of the moving pieces. What exactly is this so-called game intelligence and court vision? Can it be recognized and developed in younger players? For the first time, neuroscientists at Sweden’s Karolinska Institutet have found a link between our brain’s “executive functions” and sports success. Arjen Robben and Cristiano Ronaldo When in the middle of a heated game on the field or court, our brains are accomplishing the ultimate in multitasking.

In the everyday world, these types of activities, including planning, problem solving, verbal reasoning, and monitoring of our actions, have been called “executive functions.” One of these standardized methods is the Delis-Kaplan executive functions system (D-KEFS) that consists of a series of tests of both verbal and non-verbal skills. Exercise and Children’s Intelligence, Cognition, and Academic Achievement. Effects of Physical Activity on Children’s Executive Function: Contributions of Experimental Research on Aerobic Exercise. Executive Functions: Articles, Blogs, Books, and More. What we know currently about mirror neurons. - PubMed - NCBI. Neuroscience for Kids - Sidedness.