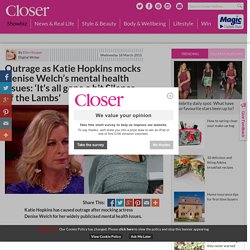 Telling the 56-year-old, who is an ambassador for Mind Charity, to ‘Seek help,’ Hopkins then faced a backlash from Welch, who has frequently spoken out about her struggle with mental illness. ‘@MindCharity have a word with @RealDeniseWelch would you. it’s all gone a bit Anthony Hopkins - Silence of the Lambs years’ Katie hit out with. Denise was quick to respond, admitting she has ‘lived with mental illness since I gave birth 26 yrs ago. I have & will continue to speak out against bigots like @KTHopkins.’ Never one to go down without a fight, Katie then tweeted: ‘’Oi Denise Squelch, a present for you bird. Bipolar Scorpio sur Twitter : "STRUGGLE OF MENTAL HEALTH~PLAYLIST~ #mentalhealth #bipolar #depression. The struggle of mental health. TED. Putting public money into mental health is common sense. Nick Clegg has announced plans to spend an extra £250 million a year on mental health services for children, new mothers and servicemen. 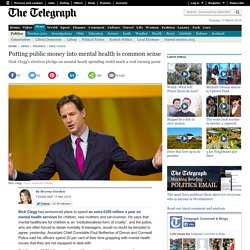 He says that mental healthcare for children is an “institutionalised form of cruelty”, and the police, who are often forced to detain mentally ill teenagers, would no doubt be tempted to agree: yesterday, Assistant Chief Constable Paul Netherton of Devon and Cornwall Police said his officers spend 20 per cent of their time grappling with mental health issues that they are not equipped to deal with. But this extra £1.25 billion over the next five years might be more warmly welcomed if so many cuts to mental health budgets had not been made in the last five years.

In October 2013, Dr Martin Baggaley, a leading psychiatrist and the director of the South London and Maudsley NHS Trust, described the mental health system in England as “inefficient” and “unsafe”. Two months later, the Royal College of Psychiatrists said services were ready to “snap”. Mental Illness and Why The Skeptic Community Should Give a Shit: JT Eberhard’s Talk at Skepticon 4. Hi, Natasha here.

JT mentioned me in the talk (which was cute, he sent me a link on my phone to the exact point in the video where he mentions me, that flirt.) I am late in wandering into the forums, as always. Here are my two cents. Expecting the entire breadth of mental health activists and advocates to hold the same position on something like this, is unreasonable. Healthy debates within the group are good, but splintering is bad. Shatter the Shame. It’s time. 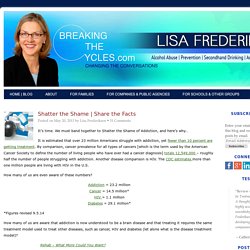 We must band together to Shatter the Shame of Addiction, and here’s why… It is estimated that over 23 million Americans struggle with addiction, yet fewer than 10 percent are getting treatment. By comparison, cancer prevalence for all types of cancers [which is the term used by the American Cancer Society to define the number of living people who have ever had a cancer diagnosis] totals 12,549,000 – roughly half the number of people struggling with addiction. Another disease comparison is HIV. The CDC estimates more than one million people are living with HIV in the U.S. Lisa Frederiksen sur Twitter : "#Addiction is a chronic, often relapsing brain disease. Share the facts; help shatter the shame. Ending The Stigma Of Mental Illness ~ Not Calling It Mental Illness Might Be A Good Start.

It is wonderful to see that there is an increased awareness of and drive to end the stigma associated with mental illness. 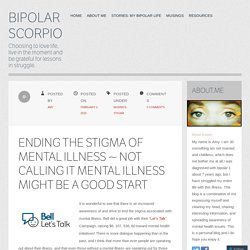 Bell did a great job with their “Let’s Talk” Campaign, raising $6, 107, 538, 60 toward mental health initiatives! There is more dialogue happening than in the past, and I think that more than ever people are speaking out about their illness, and that even those without a mental illness are speaking out for those suffering. I think that it will continue to grow and through education and dialogue the stigma will become less of a threat to so many suffering. Kate Middleton Has An Empowering Message For Those Facing Mental Health Stigma. Kate Middleton is taking a profound stand against mental health stigma -- particularly when it comes to younger generations. 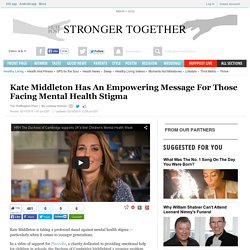 In a video of support for Place2Be, a charity dedicated to providing emotional help for children in schools, the Duchess of Cambridge highlighted a growing problem when it comes to how society regards these disorders. Simply put, we don't treat mental health with the same gravity as other maladies. She recorded the PSA in honor of the United Kingdom's first Children's Mental Health week, which takes place Monday, Feb. 16 through Sunday, Feb. 22. Kate Middleton Has An Empowering Message For Those Facing Mental Health Stigma. 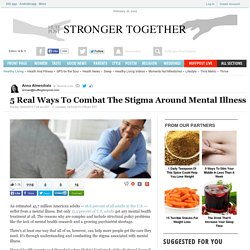 But only 13.4 percent of U.S. adults get any mental health treatment at all. The reasons why are complex and include structural policy problems like the lack of mental health research and a growing psychiatrist shortage. There's at least one way that all of us, however, can help more people get the care they need. Canada's prisons becoming warehouses for the mentally ill. Canada’s prisons are facing a growing crisis as they become the “institutions of last resort” for people with mental illnesses, the Canadian Psychiatric Association says. 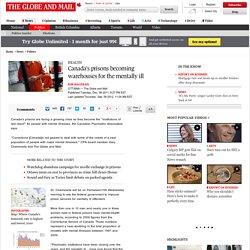 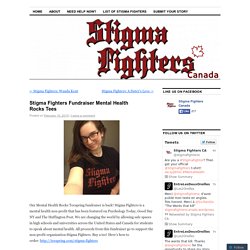 Stigma Fighters is a mental health non-profit that has been featured on Psychology Today, Good Day NY and The Huffington Post. We are changing the world by allowing safe spaces in high schools and universities across the United States and Canada for students to speak about mental health. All proceeds from this fundraiser go to support the non-profit organization Stigma Fighters. Buy a tee! Mental Disorders as Brain Disorders: Thomas Insel at TEDxCaltech. No Health Without Mental Health: Denny Morrison at TEDxBloomington. Wrap Your Brain Around This: An Infographic On The United States Of Mental Illness. Mental Illness. 1. 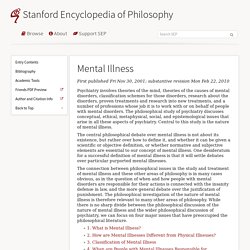 What is Mental Illness? While there is debate over how to define mental illness, it is generally accepted that mental illnesses are real and involve disturbances of thought, experience, and emotion serious enough to cause functional impairment in people, making it more difficult for them to sustain interpersonal relationships and carry on their jobs, and sometimes leading to self-destructive behavior and even suicide.

The most serious mental illnesses, such as schizophrenia, bipolar disorder, major depression, and schizoaffective disorder are often chronic and can cause serious disability. Are Mental Disorders Like Physical Diseases? Blurring The Boundary Between Mental and Physical. - Health Policy & Advocacy. Mark Dombeck, Ph.D. Welcome to 2003 everyone. Over the past year, you may have followed the political debates concerning mental health parity in the USA. Mental health parity is the idea that mental disorders should be treated with the same level of respect (and insurance coverage) as are physical disorders.

Though progress has been made in this debate (with President Bush making public his support for parity legislation), we've yet to see any real action or reform take place. On this front, (in the words of Counting Crows singer Adam Duritz), "Maybe this year will be better than the last". The reason that the parity debate exists at all is because our institutions (governmental, legal, medical, insurance/financial, etc.) are and have been (for hundreds of years!) Mental Illness in Society: Overview of Mental Health Care: Merck Manual Home Edition. The distinction between mental and physical illness. Conditions that now would be regarded as ‘mental illnesses’, such as mania, melancholia and hysteria, have figured in classifications of disease since the time of Hippocrates, and for over 2000 years were treated by physicians with much the same range of potions, medicaments and attempts to correct humoral imbalance as they employed for other more obviously medical disorders.

Although Plato attributed some forms of madness to the Gods, and medieval theologians like Thomas Aquinas attributed hallucinations and insanity to demons and other supernatural influences, from the Renaissance to the second half of the 18th century melancholia and other forms of insanity were generally regarded as bodily illnesses, not differing in any fundamental way from other diseases. The idea that insanity was fundamentally different from other illnesses, that it was a disease of the mind rather than the body, only developed towards the end of the 18th century. 8 million deaths a year linked to mental illness. Approximately eight million deaths each year are attributable to mental illness. This “mortality gap” between people with mental disorders and the general population has been increasing since before 1970, researchers say.

The analysis of 203 research articles included mental disorders overall, and specific diagnoses such as schizophrenia, mood disorders, depression, bipolar disorder, and anxiety disorders. The researchers considered studies of both people who were hospitalized and those treated in the community. Mortality gap.

Three quarters of businesses don’t have a mental health policy, major new survey reveals. 5 February 2015 Just 7 per cent of employers have discussed mental health issues with their staff and three quarters of businesses don’t have a mental health policy in place, according to a major new survey by the Institute of Directors. The findings are revealed on national Time to Talk day, which aims to encourage people to have a five minute conversation about mental health as part of the ongoing campaign to break the silence that often surrounds the topic. A survey of 1,150 employees and another of 586 senior decision makers from UK businesses, conducted by YouGov on behalf of the IoD in January 2015, showed that as things stand 74 per cent of employees say they would prefer to discuss mental health concerns with someone outside of work.

The IoD/YouGov survey sheds a light on how bosses and employees consider mental health, and reveals the difficulty that SMEs in particular have when it comes to understanding and talking about the issue. Key Findings.